Do ‘plotters’ have a surprise for Boris Johnson? Prime Minister’s Cabinet allies accuse Tory MPs of scheming at secret dinner to replace him with Jeremy Hunt

They suspect MPs who attended a dinner at an upmarket bar in West London called The Surprise last week were scheming to trigger a Tory leadership challenge.

The event, held the night before Sue Gray’s report into Partygate was published, was hosted by Devon MP Mel Stride, a former campaign chief for Michael Gove who is seen by the Johnson camp as a rebel ringleader. 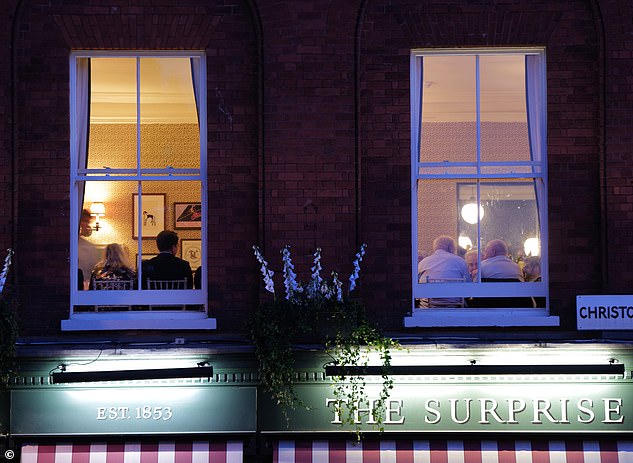 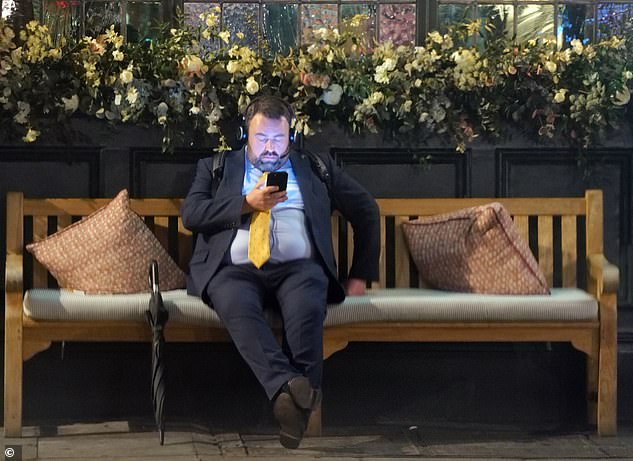 Several MPs, including Chris Loder, pictured, were spotted at the dinner, including transport secretary Grant Shapps

Of the 16 MPs known to have been there and who voted in the 2019 leadership election, just three backed Mr Johnson.

Five backed Mr Hunt, who is widely expected to mount a leadership bid if a contest is called, while six supported Mr Gove, who is not expected to enter another contest.

Chris Loder, one of the 2019 intake of Tory MPs who was accused of being one of the architects of the so-called ‘pork pie plot’ to topple Mr Johnson earlier this year was also at the meal, thrown by the so-called ‘Deep Blue’ group of centre-right MPs. Politicians at the dinner strongly denied they were scheming against Mr Johnson and accused his allies of ‘paranoia’.

They pointed to the fact that Boris arch-loyalist Grant Shapps – who has himself been tipped as an outside bet for the leadership –addressed the meeting.

But a Cabinet ally of Mr Johnson said: ‘Mel Stride is a Goveite looking for a new horse to hitch his wagon to. Many of the people he invited to the pub backed Gove or Hunt last time – including Dunne, who is running Hunt’s latest bid.

‘Any MP considering backing Hunt must be a masochist yearning for the kind of thrashing we sustained in 2017 and longing for the humiliation of a very long spell on the Opposition benches. 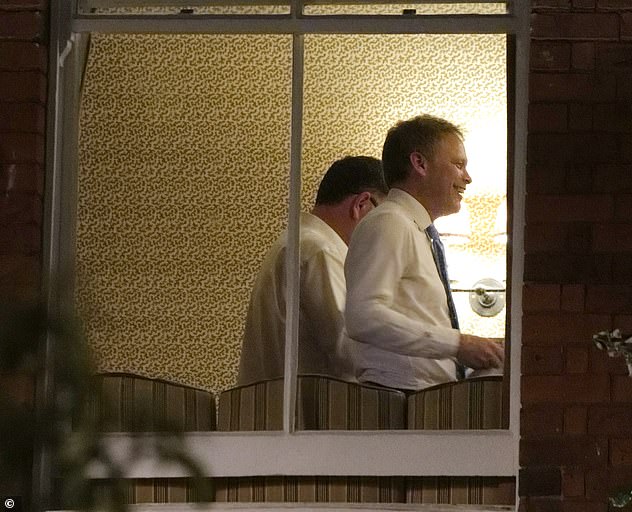 Mr Shapps, pictured, was believed to have addressed the gathering at The Surprise pub in Chelsea

‘Without Boris, we will be handing the next Election to a Labour-SNP coalition. But then, some of our pro-Remain MPs and those who think they were naturally destined for high office, are too bitter to care.’

However, one source at the Deep Blue dinner insisted: ‘That is just paranoia. It was a diverse range of people, both Brexiteers and Remainers. And Grant wouldn’t get involved with anything which might undermine Boris.’

But another MP present said: ‘It did feel very much like a softening-up exercise ahead of a contest’. The row comes amid an increasingly febrile atmosphere in the party, with eight Conservative MPs having called for the Prime Minister to quit since Wednesday’s publication of Sue Gray’s report into illegal lockdown parties in Downing Street. Yesterday Steve Brine became the latest Tory MP to confirm that he had submitted a letter of no confidence in Mr Johnson to 1922 Committee chairman Sir Graham Brady.

Mr Brine said of Partygate: ‘I have said throughout this sorry saga I cannot and will not defend the indefensible. Rule makers cannot be law-breakers.’ Newton Abbot MP Anne Marie Morris was also confirmed as one of the letter writers after revealing she has had the Tory whip restored, four months after it was removed for her support of an Opposition move to cut VAT on energy bills.

Former Minister Bob Neill has also called for Mr Johnson to quit saying: ‘It is in the national interest that the Conservatives win the next Election, but it requires a change of leader for us to do so.’

Trade Minister Penny Mordaunt, considered a potential future Tory leadership contender, condemned behaviour at No 10 as ‘shameful’, telling the Portsmouth News she was ‘angry’ that people blocking ‘reasonable requests to relax [Covid] restrictions, were at the same time ignoring the rules’

Mr Johnson’s allies suspect that the timing of the letters is being co-ordinated by supporters of Mr Hunt. Many rebels are waiting for the results of the crunch by-elections in Wakefield and in Tiverton and Honiton on June 23 before deciding whether to send letters of no confidence.

Yesterday, a poll suggested that if an Election was held now, the Tories would lose all but three of the 88 battleground seats they hold by a slim majority over Labour. Even Mr Johnson’s seat of Uxbridge and South Ruislip would fall.

One senior Tory MP, who backs Mr Hunt to succeed Mr Johnson, told The Mail on Sunday that the ‘clan elders’ of the party were preparing to move against the Prime Minister, with sources claiming that former Chancellor George Osborne is playing a key role in the background by urging rebels to strike against Mr Johnson before the summer recess. Mr Osborne’s friends deny that. 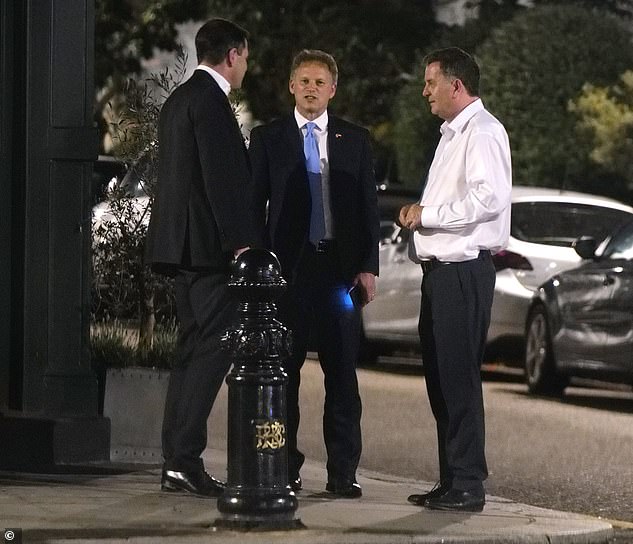 One senior Tory MP, who backs Mr Hunt to succeed Mr Johnson, told The Mail on Sunday that the ‘clan elders’ of the party were preparing to move against the Prime Minister, with sources claiming that former Chancellor George Osborne is playing a key role in the background by urging rebels to strike against Mr Johnson before the summer recess. Mr Osborne’s friends deny that

It takes 54 letters of no confidence from Tory MPs to trigger a vote against the Prime Minister. After that, 180 MPs would have to vote against Mr Johnson to lead to a full leadership race. Close allies of the PM are understood to be concerned that the threshold could be reached when Parliament returns from its one-week recess on June 6.

Informed sources said last night that even if 54 letters were received before then, it would ‘inappropriate’ for Sir Graham to announce the news before the Queen’s Platinum Jubilee celebrations.

Speaking on Radio 4 on Friday, Treasury Minister John Glen – a close ally of Chancellor Rishi Sunak – conceded that the PM was now in ‘yellow card territory’ but said he would continue to ‘get on and deliver’ on policies.

Mr Stride’s Deep Blue dining club, which he set up in 2011 as a vehicle for the ‘moderate right’ of the party, has long been seen as a front for Mr Gove’s leadership ambitions.

In the run-up to Mr Gove’s 2019 leadership campaign, which Mr Stride organised, the club was used to drum up support for his bid. One attendee of a 2019 event was quoted as saying: ‘Everyone sees through it, but it’s always under the guise of “let’s have a policy discussion”.’ 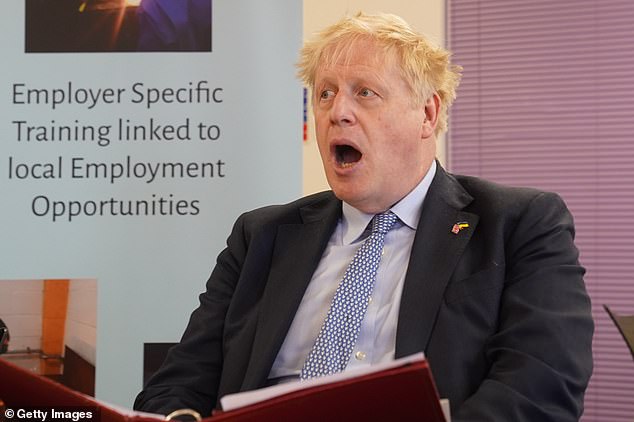 A recent opinion poll predicted 88 Tory seats could fall at the next election, including that of the PM, Boris Johnson

Mr Stride, who is also chairman of the Commons’ Treasury Select Committee, welcomed 30 MPs to his £8 million Chelsea townhouse on Tuesday evening for drinks and canapes, before walking with them to The Surprise. The politicians gathered in an upstairs private dining room for a meal of pan-fried Cornish cod, Mediterranean tagliatelle or chicken Schnitzel Holstein as they listened to Mr Shapps talk.

Established in 1853, the pub takes its name from HMS Surprise, the captured French corvette used by the British Navy to sneak up on enemy vessels in the days of Admiral Nelson.

The gathering included Mr Dunne who was a senior member of Mr Hunt’s campaign team in 2019 and has been canvassing support in the Commons for a second Hunt run for leaders.

On Friday, it was revealed that Mr Dunne had written to a constituent in reference to Ms Gray’s report, declaring: ‘I am sorry to say that any benefit of the doubt the PM enjoyed has now been eroded. While I have not called for his resignation, the PM has yet to prove to me that he is the right person to ensure the return of integrity and due decorum, that all our constituents expect from politicians’.

The 40 Tory MPs who were invited to the dinner were told to ‘save the date’ a fortnight ago, and were told only that the venue was ‘close to Sloane Square Tube’. They were only messaged the precise address on the Deep Blue WhatsApp group a couple of hours before the gathering was due to start.

The dinner included Dorset MP Chris Loder, part of a group from the 2019 intake named the ‘pork pie plotters’ because they met to discuss ousting Mr Johnson in the office of Tory MP Alicia Kearns, who has Melton Mowbray, the home of the delicacy, in her constituency.

One MP present on Tuesday said that Mr Shapps spoke ‘pretty much about everything except Boris’, adding: ‘The only mention I can recall him making was a reference to the tough media interviews he has endured defending Partygate.’

A source close to Mr Shapps said he was ‘completely bemused’ by claims the meeting was a plot. The insider insisted the meeting had been in Mr Shapps’s diary for nearly two months, adding that he was ‘as always, supportive of the PM, a stance proven by action in recent months, not just words. This was a meeting of Mel’s Deep Blue discussion group that takes a strategic look at Tory policy. Grant was invited weeks ago and took as his theme what levelling up should mean’.

Mr Dunne declined to comment last night. But friends of the MP dismissed suggestions of a leadership plot as ‘nonsense’, adding: ‘It was a routine gathering. It was addressed by Grant Shapps but it was not a leadership pitch.’

Allies of Mr Johnson who attended the event also played down talk that MPs had gathered to plot his downfall. One said: ‘The issue of leadership wasn’t mentioned. Anyway, there were people there from all wings of the party.’

A source close to Mr Stride also denied the meeting involved any plotting, saying: ‘Grant ran Boris’s leadership campaign and is about as loyal as anyone gets.

‘To my knowledge, I don’t think anybody at the event said anything disloyal at all. And there were [Boris] arch-loyalists there – it would have mad if they had.’

He added that in any case, Deep Blue did not have any ‘particular ideological locus’ within the Tory Party and that Mr Johnson himself had spoken at one of the group’s events a few weeks ago.

The source said that the timing of last week’s meeting ‘might look interesting’ but insisted invitations were sent out many weeks before hand and added: ‘No one could have known when the Sue Gray report was going to be published.’

He told The Mail on Sunday: ‘To suggest that a gathering, organised months ago, that Boris himself has attended previously, that had scores of MPs from across the party including his staunchest supporters and a guest speaker who ran his leadership campaign, is a plot, is simply nonsense.’

Victorians brace for hail, flash flooding as severe thunderstorms roll across the state