A simple blood test may reveal which coronavirus patients are most likely to benefit from dexamethasone — the only drug proven to save the lives of the critically-ill.

Researchers in New York found that patients with a high level of a substance called C-reactive protein in their blood were the best candidates for the drug.

C-reactive protein is what scientists call a ‘marker’ and if they see a lot of it it means someone is suffering from inflammation – internal swelling caused by the immune system.

The researchers said patients with high levels of C-reactive protein were less likely to die or end up on a ventilator when treated with steroids, while giving it to people with healthy levels of the protein could be dangerous.

The inflammatory marker may help flag which coronavirus patients will benefit from dexamethasone, a steroid which costs £5 and has been around for decades.

Currently doctors decide whether to use the drug depending on whether the patient is having severe difficulty breathing.

NHS officials approved dexamethasone for use on critically-ill patients after results of the world’s biggest Covid-19 drug trial found it could cut their risk of death.

Oxford University scientists claimed it may save up to 35 per cent of patients relying on ventilators — the most dangerously ill — and reduce the odds of death by a fifth for all patients needing oxygen at any point.

Doctors across the world have tested a cocktail of medicines during the pandemic in the aim of saving lives, and are now slowly building a picture of what works best for different patients. 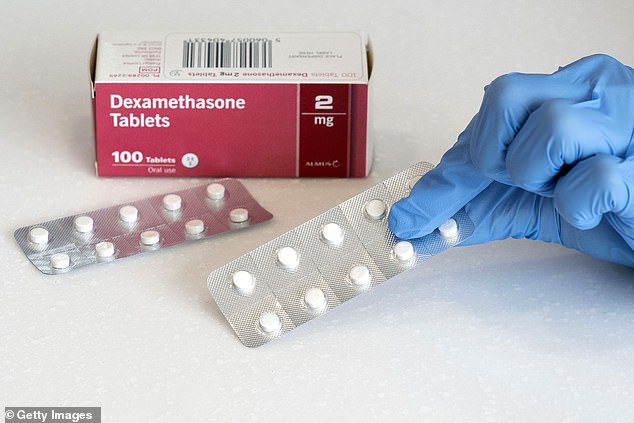 Covid-19 causes inflammation, which is the body’s natural yet intense response to the virus.

Sometimes this can lead to death because the inflammation severely damages the lungs and other organs.

Dexamethasone, approved for use in the UK in mid-June, reduces inflammation in the lungs, according to the RECOVERY trial.

The new study was led by Albert Einstein College of Medicine and Montefiore Health System, both based in New York City.

Researchers led by Dr Marla Keller published their results in the Journal of Hospital Medicine.

Dexamethasone is a type of corticosteroid medication which is used as an anti-inflammatory to treat a wide-rang of conditions.

It was first made in 1957 by US physician Philip Showalter Hench and was approved for medical use in 1961.

The drug, which is sold under the brand names Ozurdez and Baycadron, is on the World Health Organization’s List of Essential Medicines.

It is given via an injection or a once-a-day tablet and is used to treat a variety of afflictions.

It is even used to help reduce the side effects of chemotherapy in cancer patients.

The steroid is also used to treat  conditions that cause inflammation, conditions related to immune system activity, and hormone deficiency.

Dexamethasone is known to cause a number of mild to moderate side effects, including vomiting, heartburn, anxiety, high blood pressure, muscle weakness and insomnia.

What did the RECOVERY trial show?

On June 16, 2020, a trial to test possible treatments for coronavirus patients was started by the Nuffield Departments of Public Health and of Medicine at the University of Oxford.

While the trial is expected to continue until June 2021, a preliminary report on its findings was published on July 18.

However, this was only the case in patients who were struggling to breathe and needed respiratory support.

People who didn’t require breathing support saw a worse survival rate if they were treated with the drug, although this may have been coincidence.

The World Health Organisation (WHO) states that dexamethasone should be reserved for seriously ill and critical patients receiving COVID-19 treatment in a hospital setting.

The WHO Director-General said: ‘WHO emphasizes that dexamethasone should only be used for patients with severe or critical disease, under close clinical supervision. There is no evidence this drug works for patients with mild disease or as a preventative measure, and it could cause harm.’

Based on those preliminary results, dexamethasone treatment has been recommended by the National Institutes of Health in the US, and by the NHS in the UK.

Dexamethasone has not been recommended in patients with COVID-19 who do not require supplemental oxygen or hospitalisation.

How does it help Covid-19 patients?

In coronavirus patients, the steroid reduces inflammation in the lungs triggered by an overreaction by the immune system.

One in 10 symptomatic Covid-19 patients are thought to suffer from the nasty symptom, known as acute respiratory distress syndrome (ARDS).

ARDS causes the immune system to become overactive and attack healthy cells in the lungs.

This makes breathing difficult and the body eventually struggles to get enough oxygen to vital organs.

The academics compared the outcomes for two groups of people hospitalised after testing positive for Covid-19.

One group of 140 patients was treated with steroids within 48 hours of hospital admission, while a control group of 1,666 similar patients did not receive steroid therapy.

Nearly all of the patients initially had a blood test to measure levels of C-reactive protein (CRP), which the liver produces in response to inflammation.

A normal CRP level reported in the study is below 0.8 milligrams per deciliter of blood. The higher the CRP level in the blood, the greater amount of inflammation.

The findings show early use of steroids did not impact mortality or mechanical ventilation rates.

However, it did show a difference in outcome depending on inflammation levels in each patient.

The study found in patients with high levels of inflammation – a CRP level greater than 20 – steroids reduced the risk of going on mechanical ventilation or dying by 75 per cent.

But critically, the study also found for patients with a normal or low level of inflammation, CRP levels less than 10, steroid use increased the risk of mechanical ventilation or death by 200 per cent.

William Southern, a professor of medicine and the study’s senior author, said: ‘Our findings suggest that steroid therapy should be reserved for people with high inflammation, as indicated by markedly elevated CRP levels.

‘It’s a different story for people who do not have significant inflammation: for them, any benefit is outweighed by the risks from using steroids.’

Commenting on the study, Luis Ostrosky, an infectious diseases doctor at the University of Texas Health Science Center at Houston said: ‘Steroids are Goldilocks drugs: They need to be given at the just right time.’

Speaking to Science News, he said giving steroids too early may rein in the immune system too much so that it can’t effectively fight the coronavirus, leading to the virus doing more damage.

And ‘if you give steroids too late, the damage is already done’, he added.

The findings confirm those from the large scale British trial of steroid use for COVID-19 patients, called RECOVERY.

However, this was only the case in patients who were struggling to breathe and needed respiratory support.

People who didn’t require breathing support saw a worse survival rate if they were treated with the drug, although this may have been coincidence.

For that reason, the drug is only recommended by the National Institutes of Health in the US, and by the NHS in the UK for those with severe breathing difficulties.

Dr Keller and colleagues said today their findings ‘have identified patient groups that may experience harm from treatment’ with steroids.

‘Second, we have identified patient groups who are likely to benefit (or be harmed) on the basis of a widely available lab test (CRP).’

Dr Shitij Arora, a hospital physician and co-author of the study, said of the blood test: ‘It’s a cheap $20 test.’

In addition, for the first time, the researchers in New York said they were able to show dexamethasone is not the only useful steroid.

Most of the patients who received steroid therapy in the study received prednisone, while some received methylprednisolone.

Dr Keller said: ‘Our study is consistent with the promising findings from Britain.

‘But for the first time, we are able to demonstrate that people can see the same life-saving benefits with steroid formulations other than dexamethasone.’

Larger trials would be needed to confirm the findings.

However, the authors wrote: ‘The public health implications of these findings are hard to overestimate.

‘Given the global growth of the pandemic and that glucocorticoids [steroids] are widely available and inexpensive, glucocorticoid therapy may save many thousands of lives.

‘Equally important because we have been able to identify a group that may be harmed, some patients may be saved because glucocorticoids will not be given.’

The study also showed that patients got better with steroid treatment regardless of their gender or ethnicity.

Man, 24, charged with death of one-year-old boy one year after he was found with fatal head injuries