Britons are waking up to blankets of snow this morning after the arrival of an Arctic blast sent temperatures plunging overnight, kicking off a five-day sub-zero freeze that could bring lows of up to -10C.

The Met Office warned of rush hour chaos from today due to treacherous conditions on roads, while the majority of the country remains under a yellow weather warning for snow and ice.

The northern parts of Wales and Scotland and the south-east and north of England are expected to see the most snowfall, with sheets of the white stuff already seen in the likes of Kent, Northumberland, Carlisle and Falkirk. 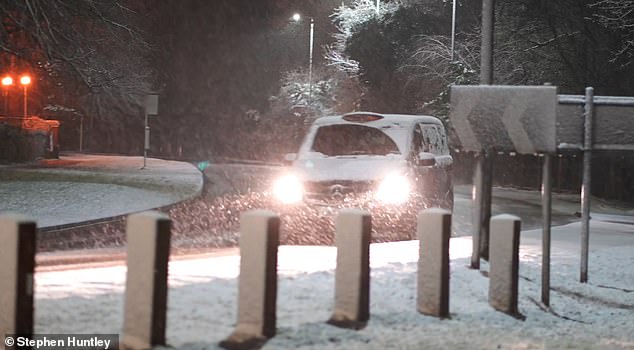 A taxi driver makes their way through the snow in Kent, south-east England, on Monday morning 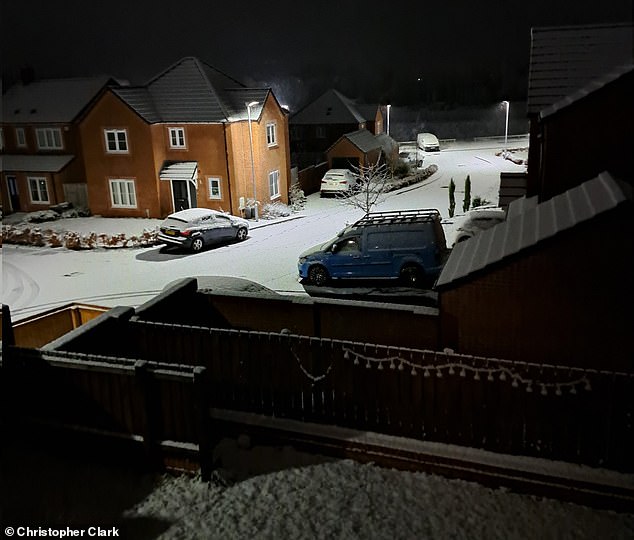 The Met Office has warned of rush hour chaos due to treacherous conditions on the roads, while the majority of the country remains under a yellow weather warning for snow and ice (Pictured: Carlisle on Monday morning)

The heavens also opened above London overnight and this morning, but the capital has so far missed out on snow.

In the south of England the Met Office predicted snow could fall between 2am and 8am, while northern Scotland could see snow fall from Monday into Wednesday.

Meteorologists are warning that most of the country will see temperatures drop below zero, with some parts of the Scottish Highlands seeing lows of -10C.

The Met Office is warning conditions in these areas could prove ‘difficult’ for people travelling to work, with snow falling in some parts.

The service added that in Kent and Sussex, the rush hour is set to prove particularly tricky, with some parts seeing up to 5cm of snow accumulating above 100m in a ‘fairly short period’.

Temperatures in the south could reach as low as -5C overnight.

Expected ‘frequent wintry’ snow showers have also seen the Met Office issue a lengthy warning for snow and ice for northern Scotland from Sunday through to Wednesday.

A second winter freeze is set to bring a six-day shiver to the UK with an 800-mile ‘Nightmare from the North’ as parts of the country could see their first snow. 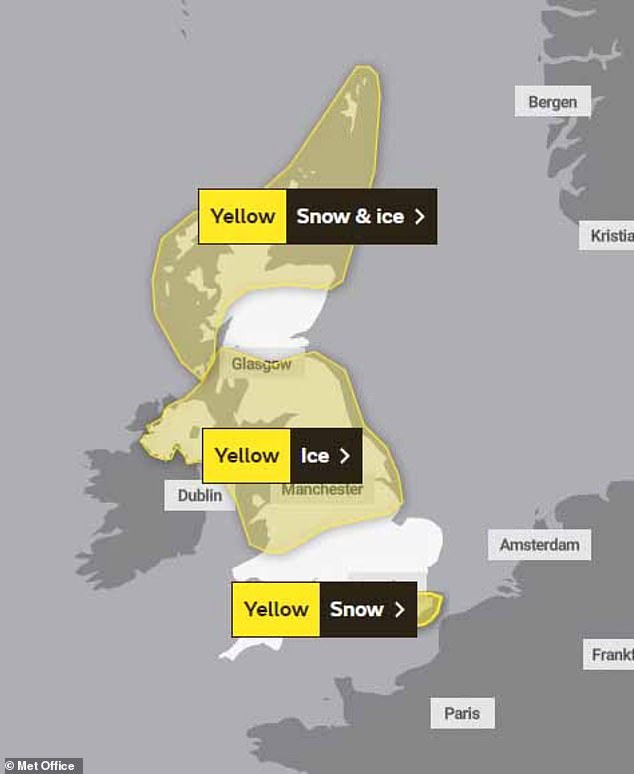 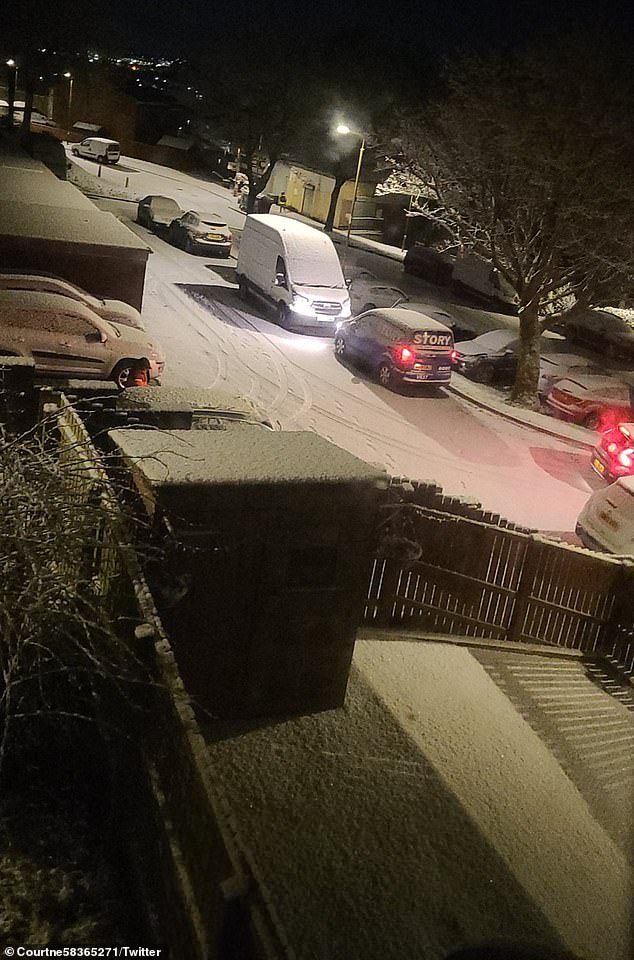 Britons are waking up to blankets of snow this morning after the arrival of an Arctic blast sent temperatures plunging overnight – as a five-day sub-zero spell beds in (Pictured: Cars and homes are covered in snow in Falkirk, Scotland, early on Monday morning) 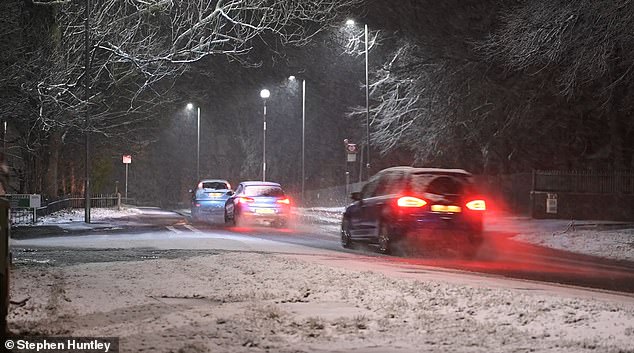 The Met Office warned of treacherous conditions on roads across the country on Monday morning (Pictured: Commuters in Kent) 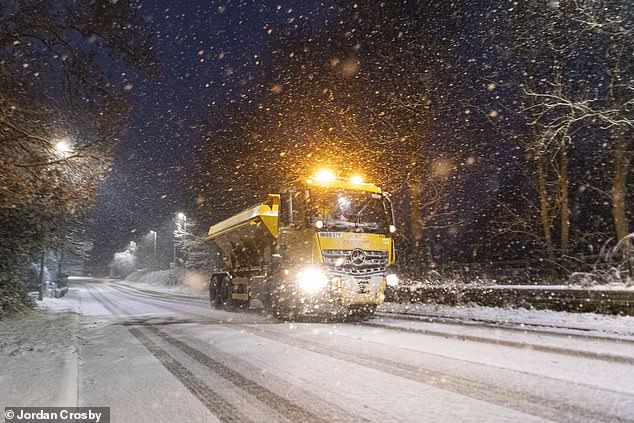 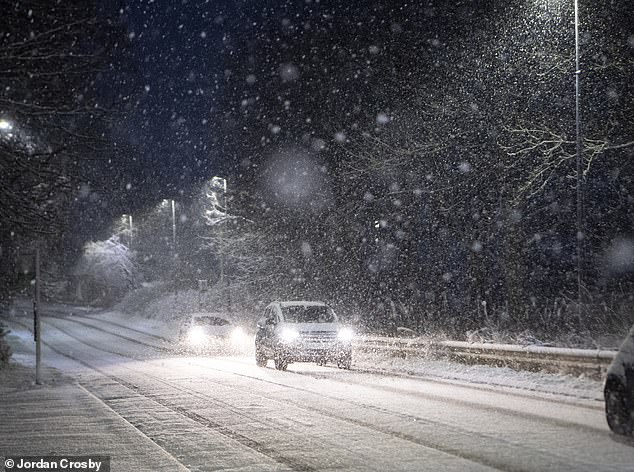 Meteorologists are warning that most of the country will see temperatures drop below zero, with some parts of the Scottish Highlands seeing lows of -10C (Pictured: Commuters in Corbridge, Northumbria on Monday morning) 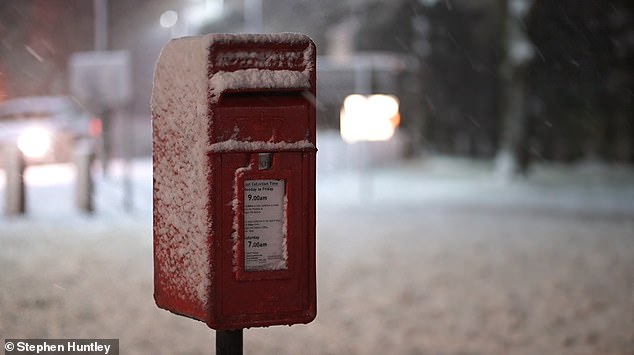 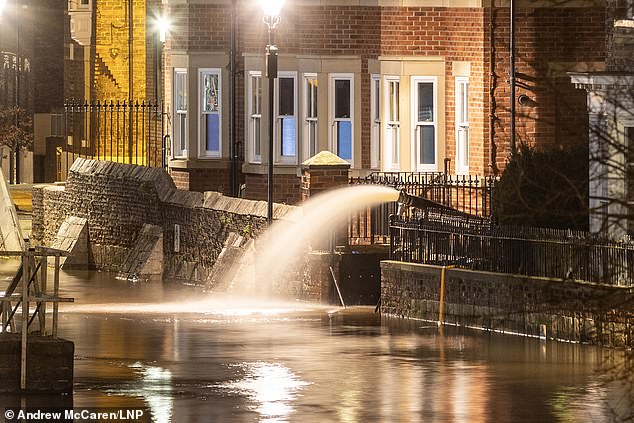 Water is pumped out of a house in York overnight, where the river Ouse has reached 4.14 metres, flooding riverside roads and property 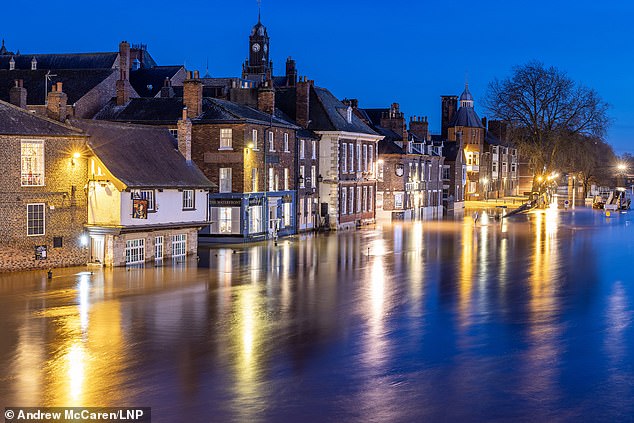 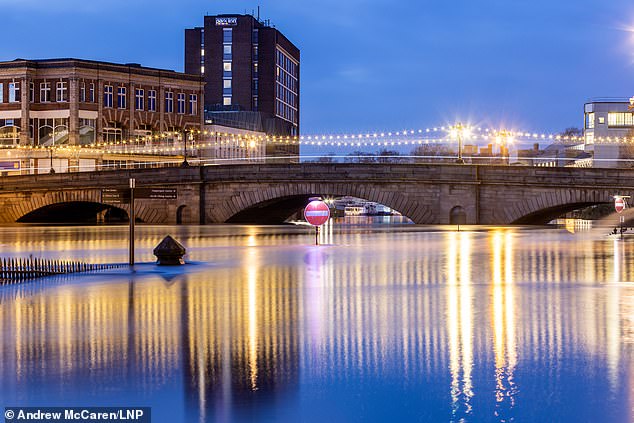 The Met Office said: ‘A few centimetres of snow are likely at low levels over a given 24-hour period, with the potential for 10-15cm above 200 metres, especially across parts of the Highlands. Ice will be additional hazard, especially Tuesday night.’

Residents are urged to take care as there may be some icy patches on some untreated roads, pavements and cycle paths and some roads and railways are likely to be affected with longer journey times by road, bus and train services.

The forecaster said: ‘By Sunday most of the UK will be in the northerly airflow, with lower temperatures spreading further south overnight.

‘Showers will fall increasingly as sleet and snow in the north, even to lower levels. Some showers further South and West, and perhaps a more persistent spell of rain overnight into Monday, could also turn to sleet and snow mainly over high ground such as the Brecon Beacons, Exmoor and Dartmoor.

‘Overnight frost will become more widespread by Monday night, with overnight temperatures below 0C across much of the UK.

‘Temperatures could get down to -10C in sheltered glens, or across high ground areas of Scotland where there is lying snow.’

City of York Council said it had taken the measure to keep the area ‘safe and open’ as it urged visitors to plan their journeys in advance. 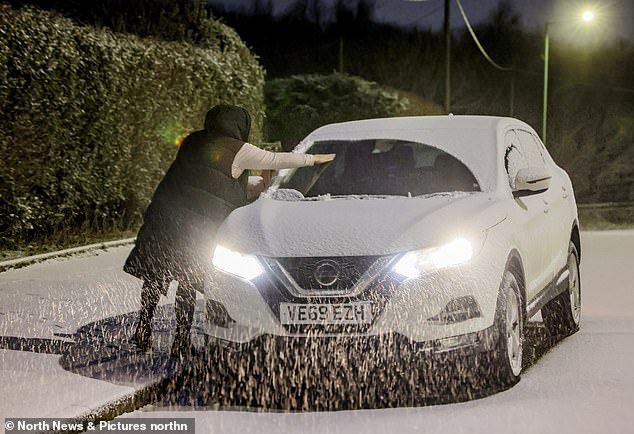 Motorists in County Durham tackle the difficult conditions on Monday as a cold snap, bringing snow and ice, grips the country 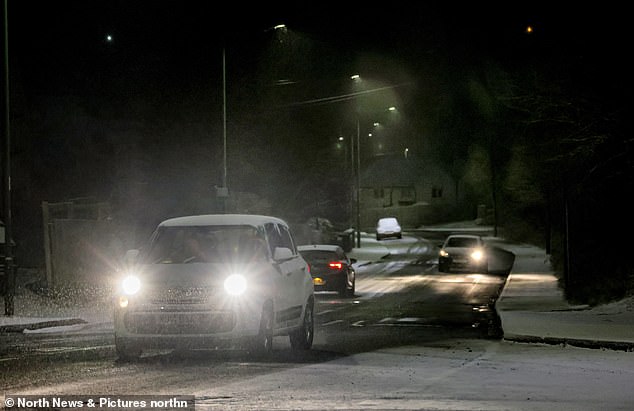 A commuter tackles the icy roads in Durham on Monday morning 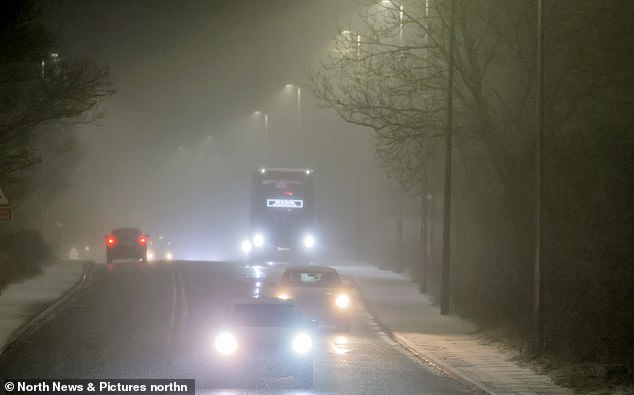 Rescue workers were seen using a boat to navigate the floodwater in the centre of York after the River Ouse burst its banks.

Heavy flooding was also seen in other areas of the UK, as the Boat Inn in Telford, Shropshire was partially submerged when the River Severn burst its banks.

Meanwhile, in Keynsham, near Bristol, the town’s rugby club was turned into an impromptu lake, as people were filmed paddle-boarding on the water.

Rail bosses planned to run empty trains at night to keep rails clear and airports have put snowploughs on standby. Councils will grit roads, with the RAC bracing for rush-hour chaos. 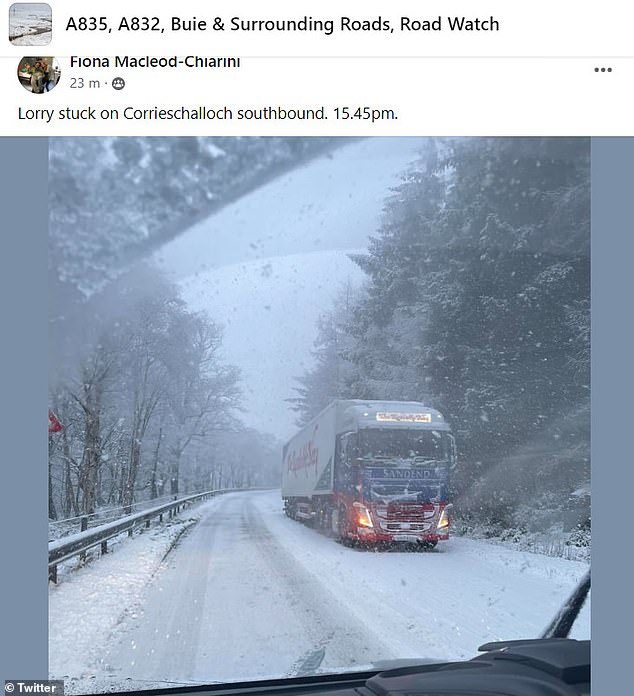 People have took to social media to share the disruption caused aross Scotland by the snow as a lorry was seen stuck on Corrrieschalloch southbound around 3.45pm on Sunday 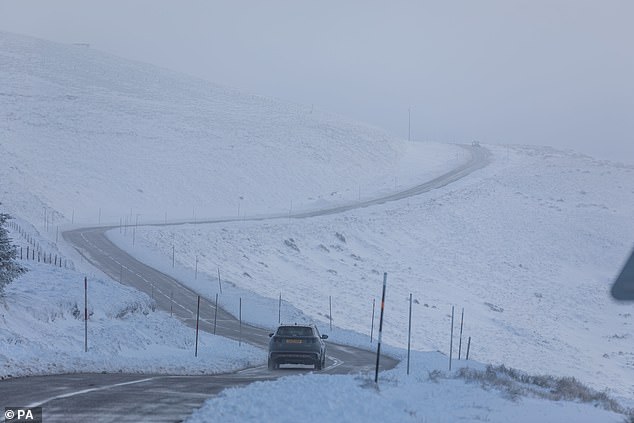 Traffic Scotland said there were reports of several vehicles becoming stuck in snow on the A835 between Ullapool and Braemore late on Sunday afternoon and urged people to take care.

There were reports of heavy snow on the A835 at Braemore and the A9 at Ord Ousdale, and gritters have been deployed in the area.

Network Rail Scotland said that snow and ice can build up on the tracks and result in trains being delayed or cancelled – and advised people to check ahead of their journey.

The Met Office said that frequent wintry showers, mainly of snow, will feed into northern Scotland during the period covered by the snow and ice warning.

It said: ‘A few centimetres of snow are likely at low levels over a given 24-hour period, with the potential for 10-15 cm above 200 metres, especially across parts of the Highlands.

The snow and ice warning covers Moray, the Highlands and Western Isles, Orkney and Shetland and Argyll and Bute.