Construction on the biggest wind farm in the southern hemisphere will start in Victoria next year after the state’s Planning Minister gave the final tick of approval to the $2 billion facility.

It will have almost twice as many turbines and be roughly double the megawatt capacity of the wind farm at Coopers Gap in Queensland, which is presently the biggest in Australia.

It comes after years of legal challenges by local farmers and wrangling over the size of the wind farm, where 230-metre turbines – almost as tall as Melbourne’s Rialto Towers – will produce enough power for more than 765,000 homes per year, according to the project’s operators.

The site at Rokewood, 130 kilometres west of Melbourne, will cover 167 square kilometres.

Under the plan, WestWind will give annual payments to neighbours, starting at $1000 per turbine to those who live within two kilometres of them. “We appreciate that all major infrastructure projects have some impacts to the communities in which they are constructed,” a spokeswoman said. “We are grateful to the local community who have worked with us over the past five years while the Golden Plains Wind Farm has been in development, irrespective of their personal opinion of the project.” 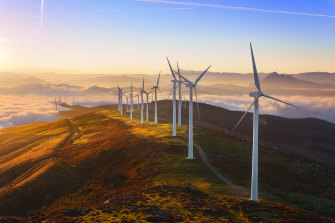 Wind turbines in the Oiz Eolic Park in Spain. Victoria has set a target of halving emissions from 2005 levels by the end of 2030.Credit:iStock

WestWind was initially given a permit for 228 turbines, although Mr Wynne said in an environmental assessment soon after that it should be reduced to 181 to protect the habitat of brolgas, a native bird.

Yet the final planning scheme was approved with a provision for 215 turbines in a layout that WestWind said was still being finalised.

Mr Wynne declined to do so. Ms Tannock said she was considering challenging this.

“This is a massive piece of infrastructure being built in Victoria and the public hasn’t seen the final plans,” she said.

“What we do know is there will be 215 turbines squeezed into a space where the minister previously told them to accommodate 181.”

In a statement, the Planning Minister said it was not necessary to send the updated proposal to a planning panel because it did not increase the total number of turbines or their height compared with the original permit granted in 2018. 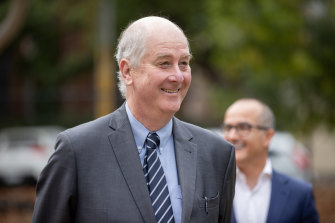 “Like all applications to amend a planning permit, the application to amend the Golden Plains Wind Farm was considered on its merits and in line with relevant planning policy and legislation,” he said.

The Andrews government has set a target of halving emissions from 2005 levels by the end of 2030, resulting in significant investment in renewable energy.

Last week the Premier pledged $40 million towards proposals for three offshore wind farms near the Gippsland coast. The largest project, Star of the South, would power about 1.8 million homes if it comes to fruition.

Golden Plains Shire welcomed the decision on the wind farm at Rokewood, which mayor Gavin Gamble said would create 768 jobs in a town with a population of 300.

“Council is a keen supporter of renewable energy and the Golden Plains Wind Farm will generate sustainable green electricity for more than 765,000 homes and save up to 4.8 million tonnes of carbon dioxide annually,” he said. “The proponents of the wind farm have engaged with the Rokewood community throughout the development of this project, including the protection of farmland and sustainable farming, as well as improvements to local roads.”

A guide to the environment, what’s happening to it, what’s being done about it and what it means for the future. Sign up to our fortnightly Clear Air newsletter here.

Chicago man who claimed he was stabbed in robbery cut himself during spat with girlfriend, police say

Maniac, 22, ‘butchered girlfriend’s sister, 14, in knife frenzy after Googling “how to kill someone” hours earlier'