INDIANAPOLIS — They’d waited more than 40 years for Monday night, as Georgia last reached this perch when Herschel Walker pranced, Jimmy Carter lived in the White House and Vince Dooley wore a tie on the sideline.

Georgia football popped occasionally under Mark Richt, hit a ceiling with Jim Donnan and toiled in the late years of Ray Goff.

Georgia’s proud fan base accumulated a generation of scar tissue waiting for a national championship, as four decades of futility included the second-and-26 in the 2017 title game against Alabama and this season’s supposed destiny getting bulldozed into SEC title game misery.

When the moment finally arrived to give Georgia its first national title in 41 seasons, it arrived only after this Georgia team stared down its demons, teased another torturous chapter and spent the fourth quarter against Alabama on Monday night toggling the thin line between history and infamy.

In the end, 5-foot-11 senior quarterback Stetson Bennett got the ending right — for the game, for a career that began as a walk-on with a half locker and for the fairy tale that will be remembered as a signature moment in school history.

After a controversial fumble gave away the lead and momentum to Alabama with nearly 10 minutes remaining, Bennett re-wrote Georgia football history by taming the fan base’s fatalism and leading a pair of touchdown drives in a 33-18 national title victory.

“I wasn’t going to be the reason that we lost this game,” Bennett said. 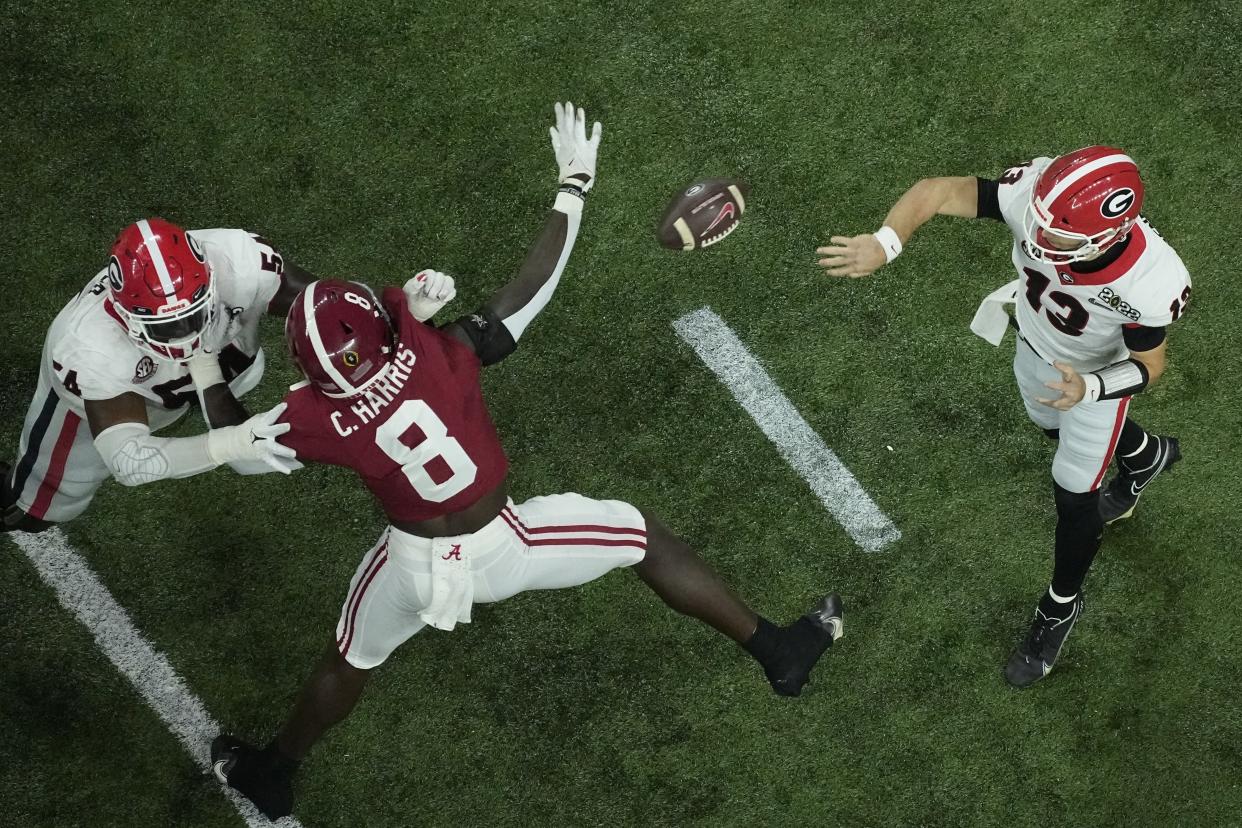 After that self-inflicted wound put Georgia behind 18-13, Bennett outdueled Bryce Young, the Heisman Trophy winner, and announced himself in Georgia lore. After Bennett staked the Bulldogs to an 8-point lead with a pair of clutch touchdown drives, they sealed the game when Young threw a 79-yard pick-six to Kelee Ringo with 54 seconds left on what could have been the game’s tying drive. After failing to score a touchdown for the game’s first 43 minutes, Georgia scored four in the final 16:20. “It hit me a little bit on the sideline,” Bennett said.

Bennett capped those back-to-back touchdown drives with a 40-yard pass to Adonai Mitchell and a 15-yard pass to star freshman tight end Brock Bowers. With Twitter coaches begging for Kirby Smart to pull Bennett for backup JT Daniels, the son of Bainbridge stuck with the walk-on from Blackshear. And two Georgia boys will be forever linked by the frenetic fourth-quarter flurry that delivered history.

“I cried,” Bennett said. He added: “I can’t articulate it. I’m not that smart. But I feel great.”

So does Smart, a Georgia graduate who won his first national title in his sixth season in Athens. He did it by finally beating his mentor, Nick Saban, in his fifth chance.

“If we had to lose a national championship, I'd rather lose one to one of the former assistants who certainly did a great job for us and has done a great job for his program and his team,” Saban said.

When historians look back on this sun-kissed Georgia moment, perusing the box score will never quite do justice to the sense of foreboding dread that followed Bennett’s fumble with 11:45 remaining in the fourth quarter. Alabama’s Christian Harris lassoed Bennett’s waist and Bennett appeared to lose the ball before his throwing hand went forward. Live, few people recognized it was a fumble.

Alabama’s Brian Branch didn’t appear to know, as he lackadaisically corralled what he assumed was an incomplete pass and just happened to have a few blades of grass between his right big toe and the sideline. That turnover gave Alabama the ball at Georgia's 16-yard line and it cashed in four plays later with a Cameron Latu 3-yard touchdown catch and an 18-13 Crimson Tide lead.

"There was going to be no way we were going to let a turnover like that stop us from winning a national championship,” Bennett said.

That was Alabama’s first touchdown, as the Tide had struggled to muster much offense the entire game. A knee injury to star receiver Jameson Williams, combined with the injury to leading receiver John Metchie in the SEC title game, left Alabama’s pass offense impaired. Young finished the game 35-for-57 for 369 yards, one touchdown and two interceptions, as Alabama gained 137 fewer yards, averaged 3 fewer yards per play (7.7 to 4.7) and gave up four more sacks than the SEC title game. “I think our defense is definitely in the history books,” Georgia defensive back Lewis Cine said.

With no touchdown for either team in the first half, Georgia’s collision with destiny came thanks to countless violent collisions throughout the game. The game’s signature showcase of dominance came when 310-pound defensive tackle Jalen Carter bullied his way through the Alabama line to block a field goal in the third quarter. Carter stuck up his left paw and clubbed the ball out of the air, penetrating so deep at the point of attack that he didn’t appear to have to jump to block the kick.

“It’s just a credit to the toughness and tenacity,” said Smart, who mentioned he took Carter off the kick return team to help him pass rush better. Carter didn’t appreciate that. “I thought he was going to beat me up over there,” Smart said.

It’s hard to say for Georgia fans if there’s a corollary between the wait and the joy, the longing and the payoff and the collective heartbreaks that preceded this breakthrough.

It’s much easier to predict that this Georgia team will always be intertwined with Bennett’s rise, as he flashed Baker Mayfield’s walk-on chutzpah, combined it with Joe Burrow’s patience and development, and endured a relentless wave of skeptics.

At least three times after the game, Bennett made it clear that fumble wouldn’t define him, wouldn’t undo this game or team. And in the end, it was the Heisman winner attempting to explain what happened, the greatest coach in the history of the sport enduring a fourth-quarter no-show and a proud program finally rising to where it has long felt it belonged.

Bennett’s journey from walk-on to junior college and back to Athens will long be a standard for betting on one’s self. Bennett overcoming his doubters unlocked Georgia’s ability to do the same.

“Man, what a story,” Smart said of Bennett, before adding: “This is a special group that will be remembered for a long time.”