A stretch of the M1 motorway has been closed because of a ‘serious road traffic collision’ as thousands of drivers head home for Christmas.

Highways England have closed all northbound lanes from junctions 11A and 12 near Luton and Dunstable. The authorities anticipate it will re-open at around 3am.

Highways England tweeted: ‘M1 Northbound J11A to J12 , if you are caught within the trapped traffic, we are looking to move you as quickly as possible. Please DO NOT move your vehicle unless told to do so by our Officers.’

It comes after motorists were warned of ‘treacherous’ driving conditions on Christmas Eve as the country faces gale-force winds and potential thunderstorms.

Social media users earlier said the Christmas getaway had brought ‘gridlock’, with one saying: ‘Train I’m waiting for to Liverpool is severly delayed and all the rest are cancelled. Merry f***ing Christmas.’

Northern Rail blamed a raft of Christmas Eve train cancellations on ‘unprecedented’ levels of staff sickness and holiday entitlements, as it runs a reduced service from Manchester, Liverpool and Lancaster.

London Paddington station was completely closed on Tuesday, while Underground services were reduced from 4pm, with most last trains leaving at Sunday times – while the final trains on Overground routes will be at about 9.30pm.

The Environment Agency had imposed 114 flood alerts and 43 flood warnings across England, with a thunderstorm warning in place for parts of the South West and South Wales which also tells of possible hail and lightning.

Much of the UK will wake up to frost and fog on Christmas Day, before the wintry weather lifts to make way for sunshine later in the day – but this will turn to wind and rain over the following 24 hours as Boxing Day arrives.

Parts of Kent, Dorset and East Sussex remain submerged under water with the Environment Agency warning of an increased risk of flooding in the South East, lower parts of the River Severn and in the East Riding of Yorkshire. 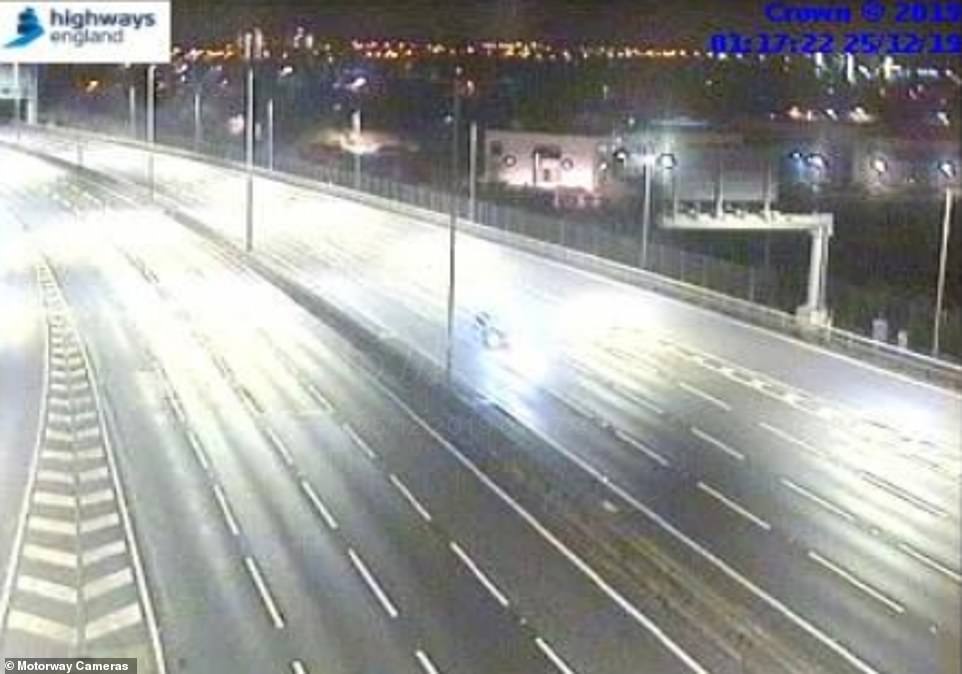 Highways England have closed all northbound lanes from junctions 11A and 12 near Luton and Dunstable. The authorities anticipate it will re-open at around 3am. 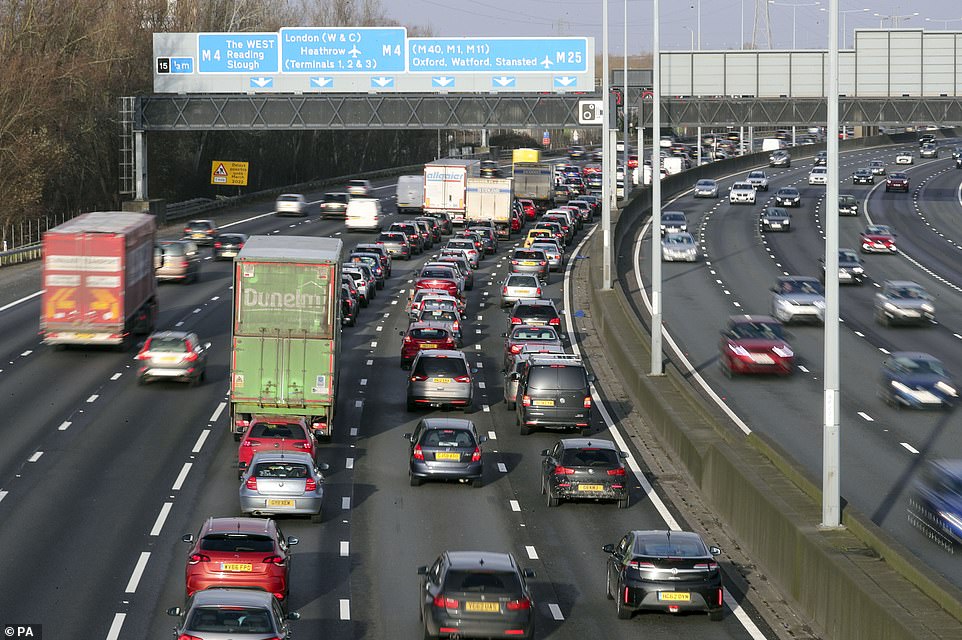 Traffic on the M25 is pictured this afternoon, as people head out of London for Christmas 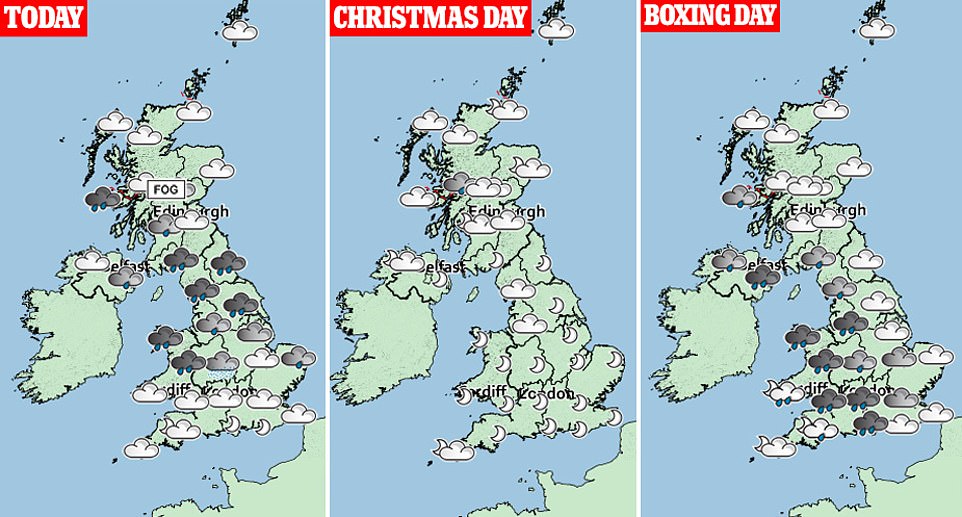 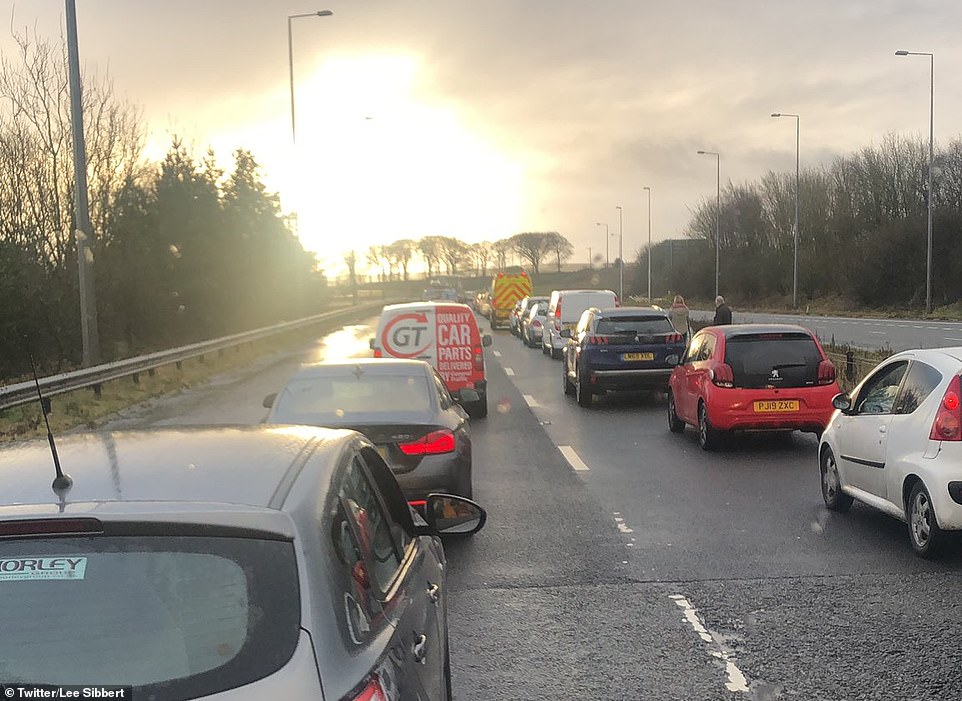 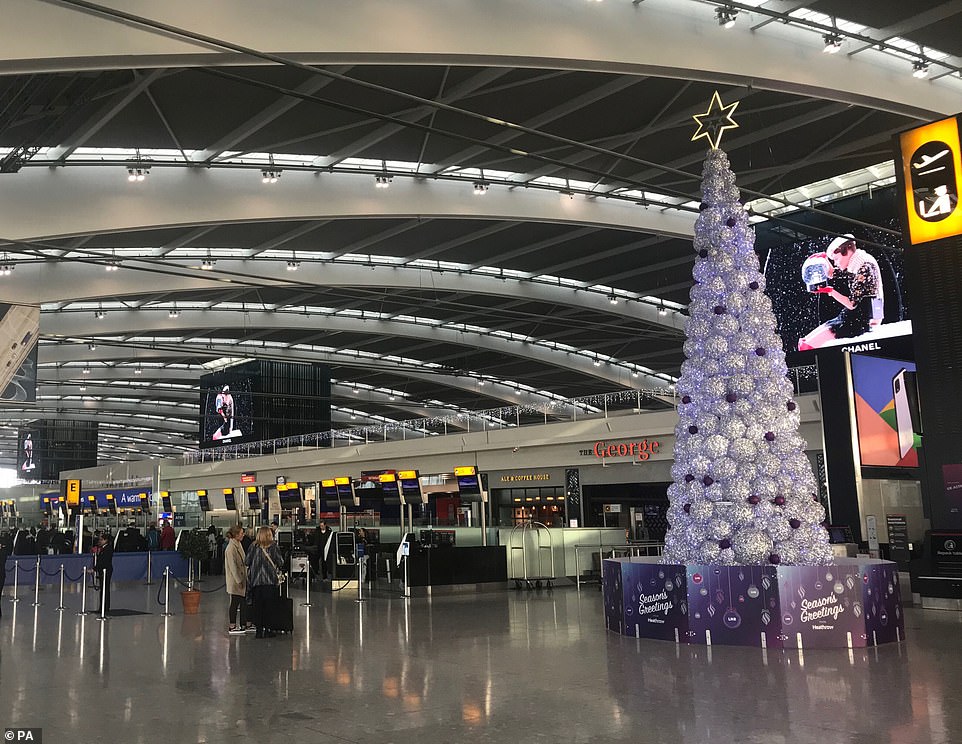 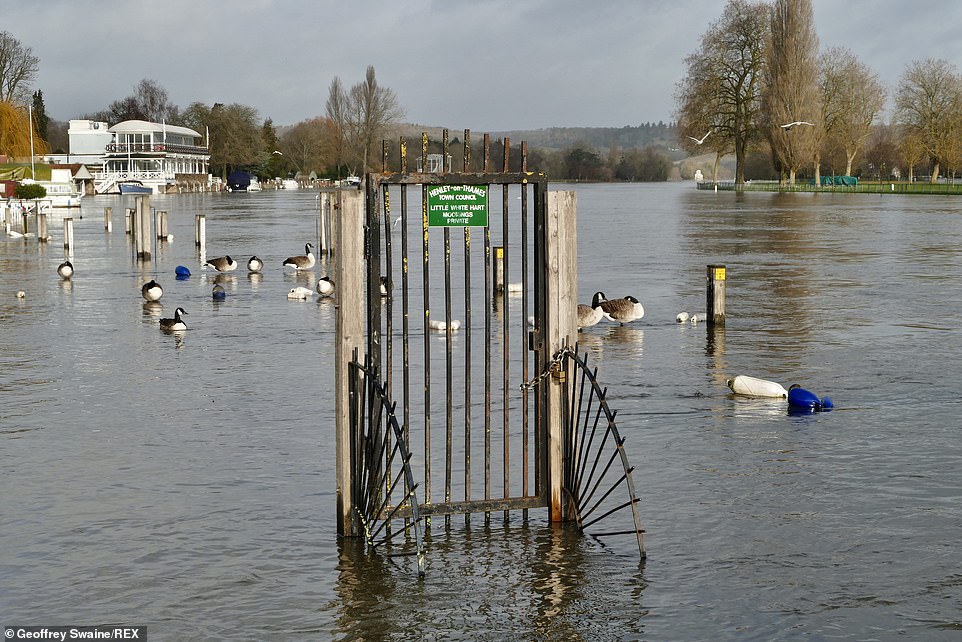 Henley-on-Thames in Oxfordshire has been hit by flooding, with the Thames path, parks and car parks all submerged

Met Office forecaster Helen Roberts said: ‘Boxing Day goes downhill a bit, with rain pushing in from the west and gradually transferring north east. There will be spells of rain for everyone and it will be quite breezy.’

The South West coast is forecast to be hit by 40mph to 45mph winds, which will reduce to 15mph to 20mph further inland. A band of rain will also sweep in from the West, pushing into the North East by the late morning.

Temperatures on Boxing Day will be mild, reaching 11C (52F) in the South West and 9C (48F) in the Midlands. More rain is forecast for Friday in the North West and western Scotland, while the South East of England will be drier.

Before the arrival of the pleasant conditions on December 25, the Met Office is predicting that thunderstorms will hit parts of south Wales and South West England on Christmas Eve today.

A severe yellow weather warning has been issued which says there may be damage to a few buildings and power outages, with delays to journeys by rail or road also possible.

As for the trains, Northern Rail – which runs trains from Hull on the east coast, to Blackpool in the west – has apologised for the disruption on its network today and advised customers to check online before travelling.

‘Alongside the annual leave entitlements at this time of the year, we currently have unprecedented levels of sickness,’ an NR spokesman said. ‘That means we have some pre-planned cancellations on certain lines.’

It is operating a reduced rail service between Lancaster to Morecambe and Manchester Piccadilly to Hadfield, with a replacement bus serving the former. A bus is also operating for its Liverpool Lime Street to Wigan service.

‘On each of the affected routes, our customers will have a range of alternative options available to them including other Northern services, trains run by other operators or rail replacement road transport,’ Northern Rail said. 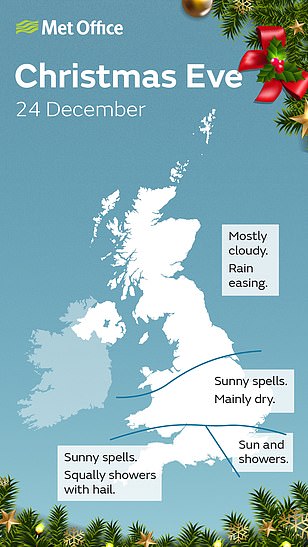 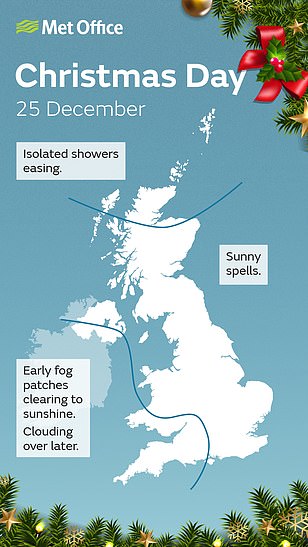 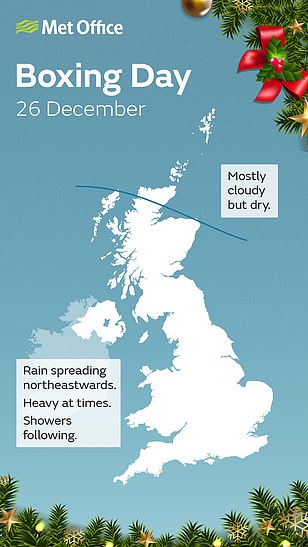 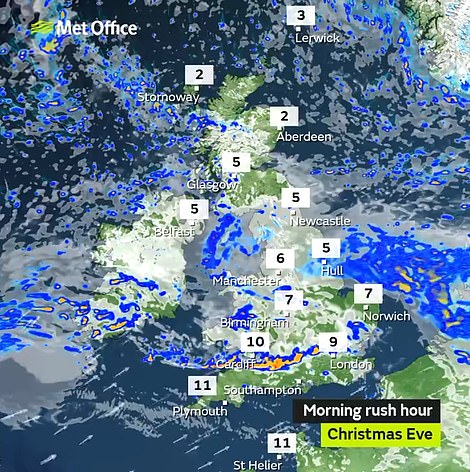 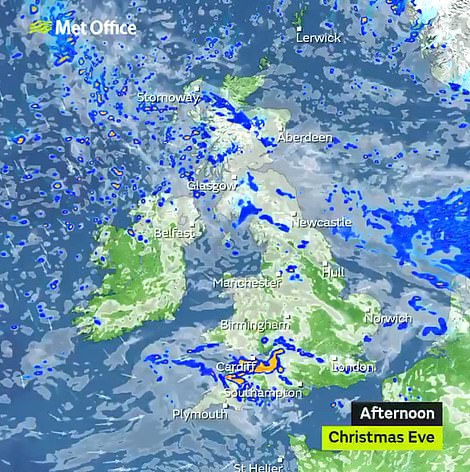 Heavy rain is falling across parts of southern England today, with the South West worst affected by the downpours 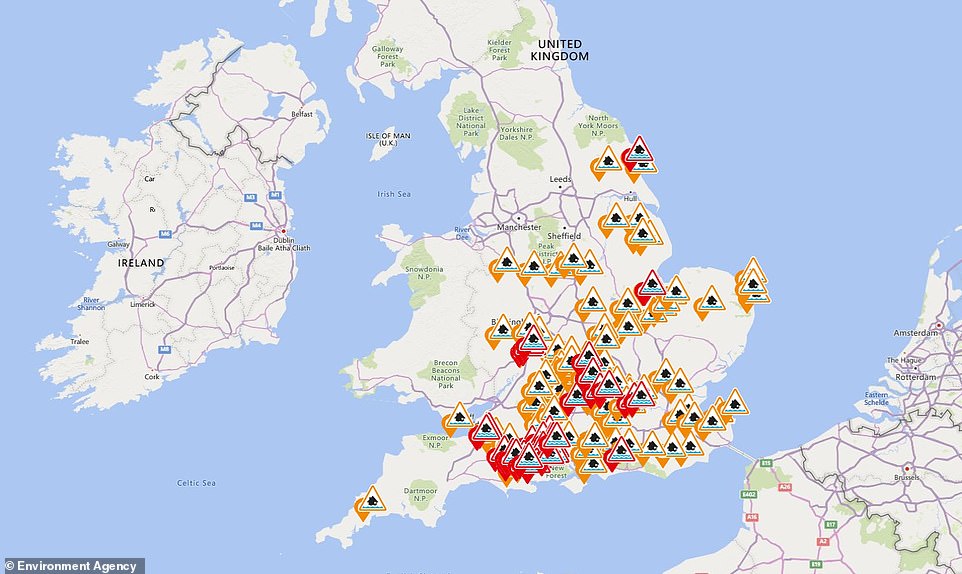 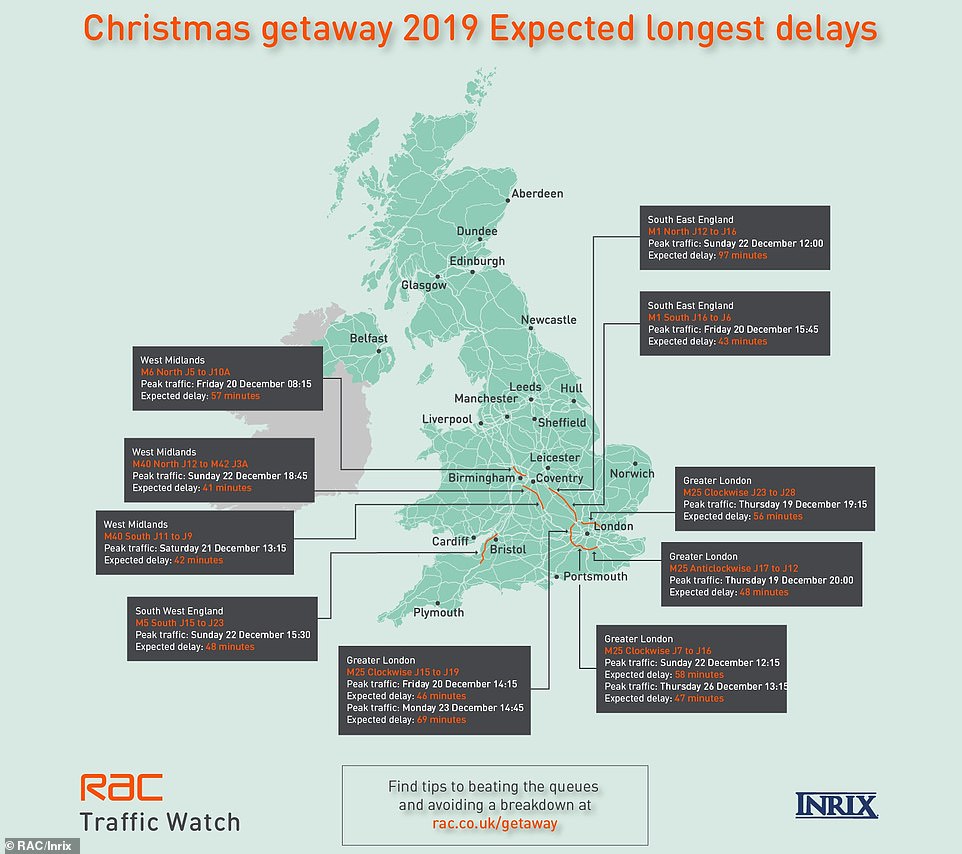 Families will make an estimated 31.2million leisure trips between Tuesday and Christmas Eve – the highest number since 2013 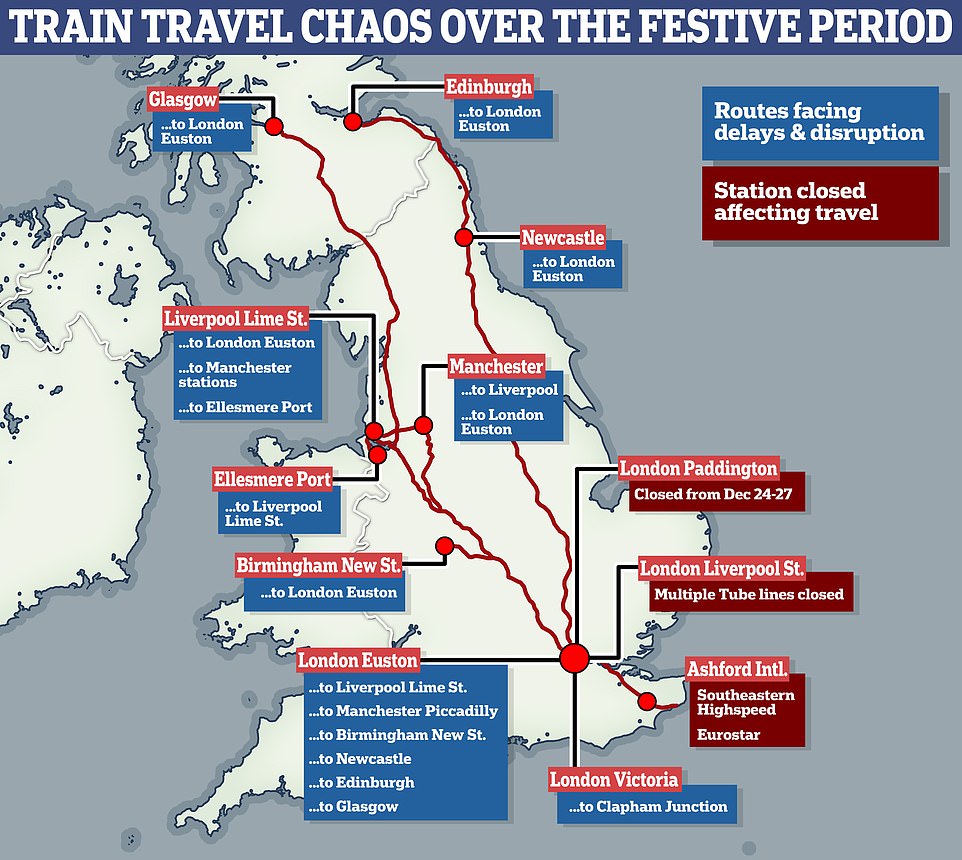 Elsewhere, London Paddington station is closed from today until Saturday due to Network Rail carrying out track and overhead wiring improvements at Southall, plus Crossrail upgrades.

What is the forecast for the Christmas holiday?

Christmas Eve: Rain will clear eastern England, to be replaced by scattered showers and bright spells. Showers in Wales and South West England may be heavy and the chance of some isolated lightning.

Christmas Eve night: It will be mostly dry with clear skies but there will be cloud and a few showers across South Wales, South West England and along the south coast during the evening. There will also be a few showers in northern and western Scotland, especially around coasts. It will be clear for most areas by dawn.

Christmas Day: It will be dry and sunny for the vast majority in the morning. There will be a few mist or fog patches in the west. Isolated showers are expected in northern Scotland. In the afternoon it will remain sunny for most although cloud will develop in some western areas. It will be foggy for many overnight.

Boxing Day: Thursday will be mostly cloudy with rain spreading eastwards. There will be hill snow in Scotland, along with brisk south-westerly winds.

Friday: There will be cloud and patchy rain in Scotland, Northern Ireland and northern England. Wales and southern England will be mostly dry with sunny spells.

A total of 386 engineering projects are being carried out across Britain’s rail network over the festive period. London King’s Cross, Liverpool Street and Ashford services will be among those suffering the worst disruption.

And motorists are being warned about ‘treacherous’ driving conditions due to last week’s heavy rainfall, as millions of people embark on a Christmas getaway.

A recent AA poll suggested 74 per cent of motorists would risk driving through flood water. Mr King said: ‘I have done a lot of driving in the last week and some of the driving conditions have been treacherous.

‘Many rural roads in the south, whilst still passable with care, have large puddles of water on the sides. Drivers need to slow down if they want to get home safely for Christmas.’

Highways England advised anyone setting off on motorways to check their routes before travelling, with many still hoping to get home for Christmas.

An RAC survey indicated that 3.1 million drivers will make a leisure trip by car today, as many people clock up the miles to be with family and friends in time for Christmas Day.

Meanwhile, London Southend Airport has confirmed no flights were cancelled on Christmas Eve despite calls for strike action by the GMB union.

A spokesman for the airport said: ‘Our teams reported for work at London Southend Airport today despite calls by the GMB for strike action.

‘We want to thank those employees for ensuring passengers flying through the airport on well-earned Christmas breaks were not delayed, and no flights were cancelled.’ 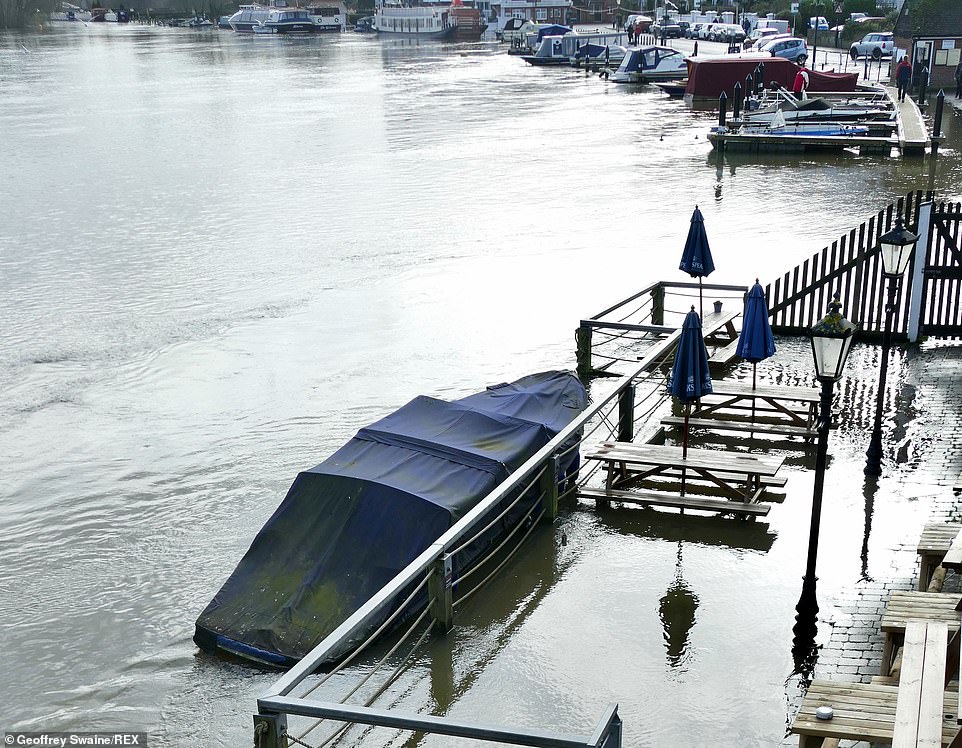 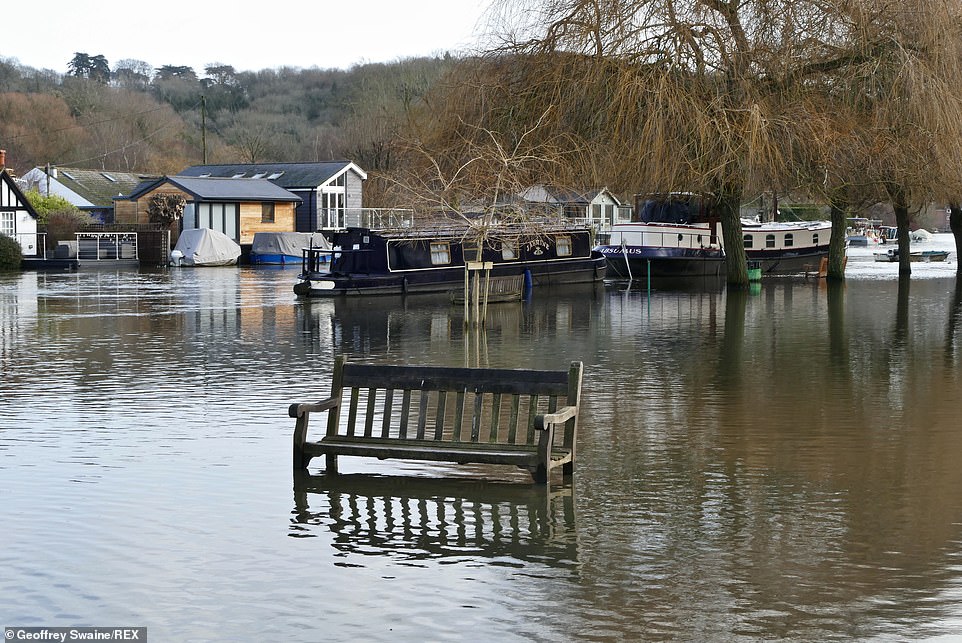 Flooding at Henley on Thames in Oxfordshire today where the River Thames path, parks and pub gardens are submerged 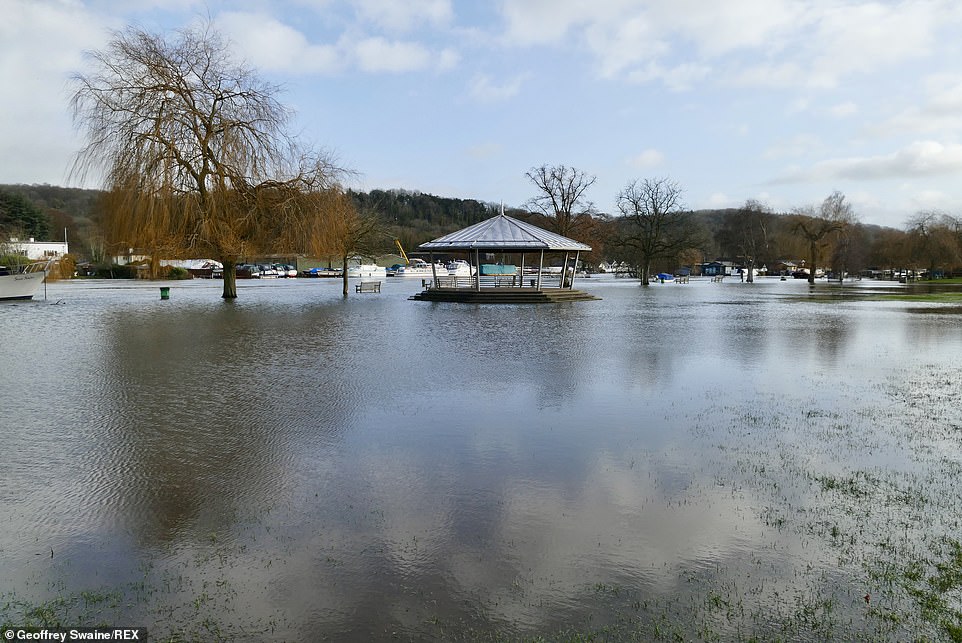 The Thames path, surrounding parks, pub gardens and car parks are all submerged in Henley on Thames today

On Christmas Day morning, temperatures in Scotland are forecast to fall to lows of -3C (27F) and about 0C (32F) in England and Wales. That will increase to about 7C (45F) in northern parts of the UK and 8C (46F) in the South.

The thickest of the morning fog is likely to be in Wales and central and western parts of England. ‘Christmas Day is looking like a lovely day for pretty much the whole of the UK,’ Met Office forecaster Greg Dewhurst said.

‘It will be a cold start in the morning with some fog, but once that clears we are looking at a dry day across the country with sunny spells. 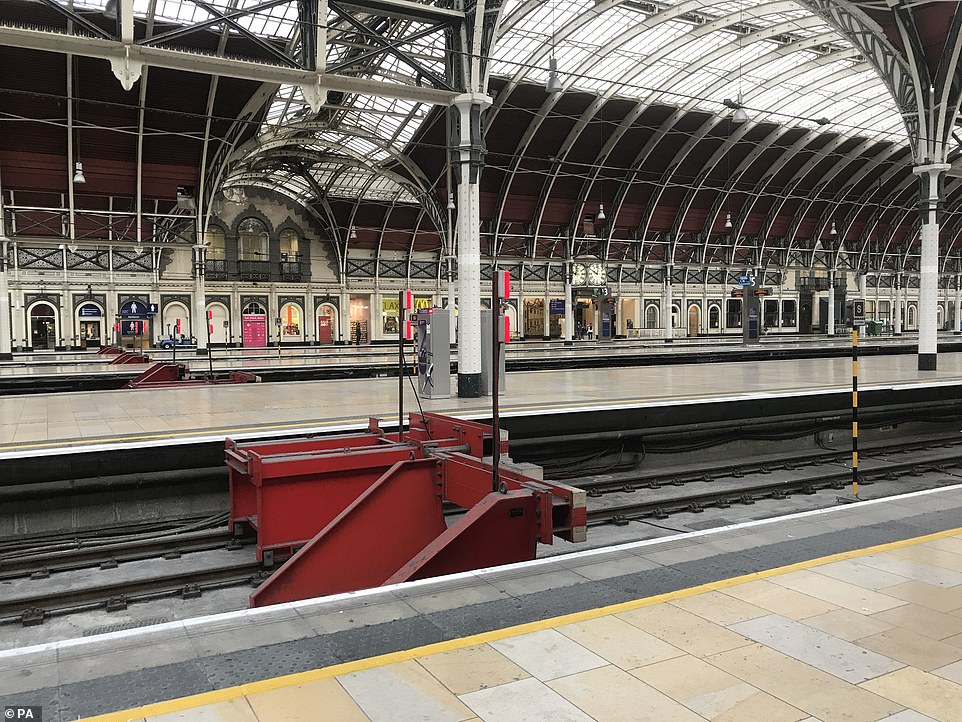 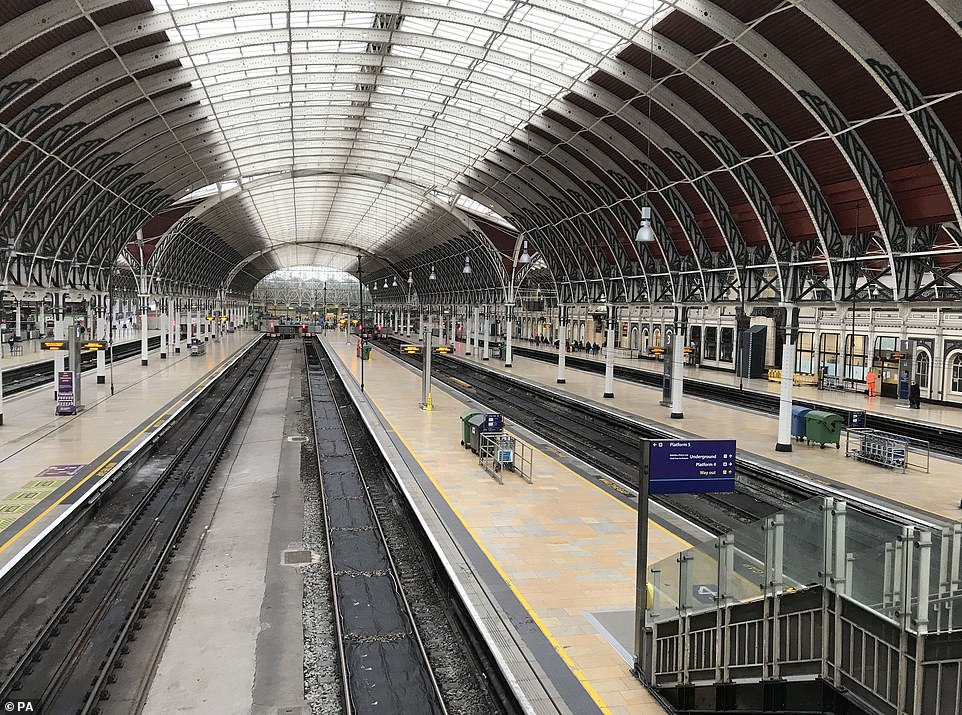 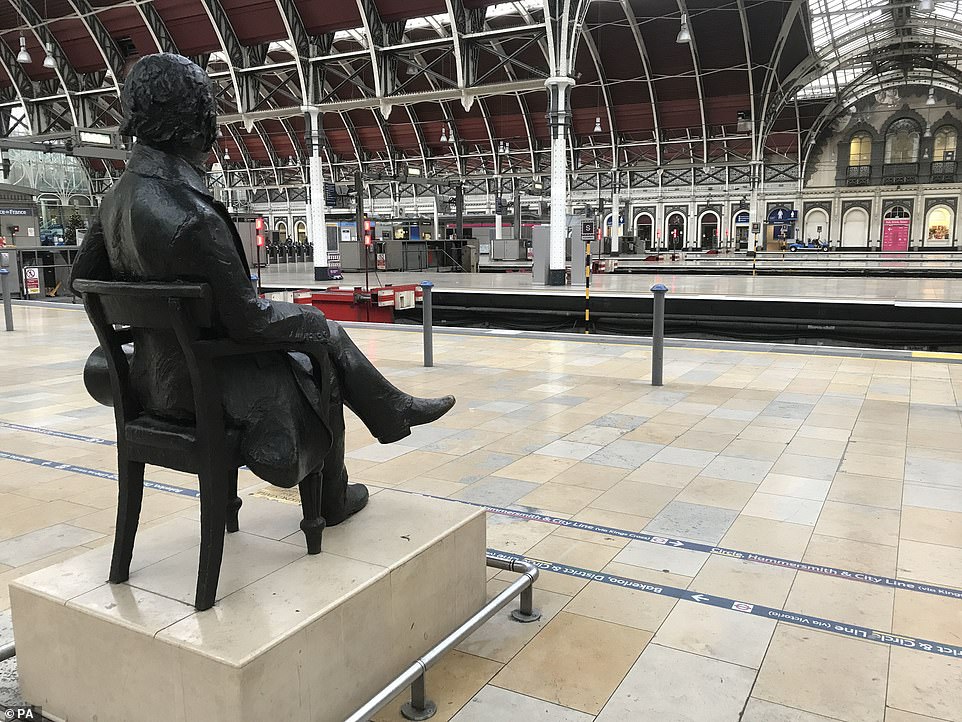 It is highly unlikely there will be any significant snowfall this year, Mr Dewhurst said, adding: ‘If there is any snow it will be over the tops of Scottish mountains, which we don’t class as a white Christmas.’

The last time there was a ‘widespread’ white Christmas in the UK was in 2010, the Met Office said. The forecaster also technically recorded 2017 as a white Christmas, after 11 per cent of weather stations reported snowfall, however none said that snow had settled. Last year there was no record of snow falling at any UK weather station.

The Met Office has to record a single snowflake falling at any one of a number of observation locations in the UK including Buckingham Palace, Edinburgh Castle and the Millennium Stadium in order to class Christmas as white. This has happened on 38 of the last 54 Christmas Days. 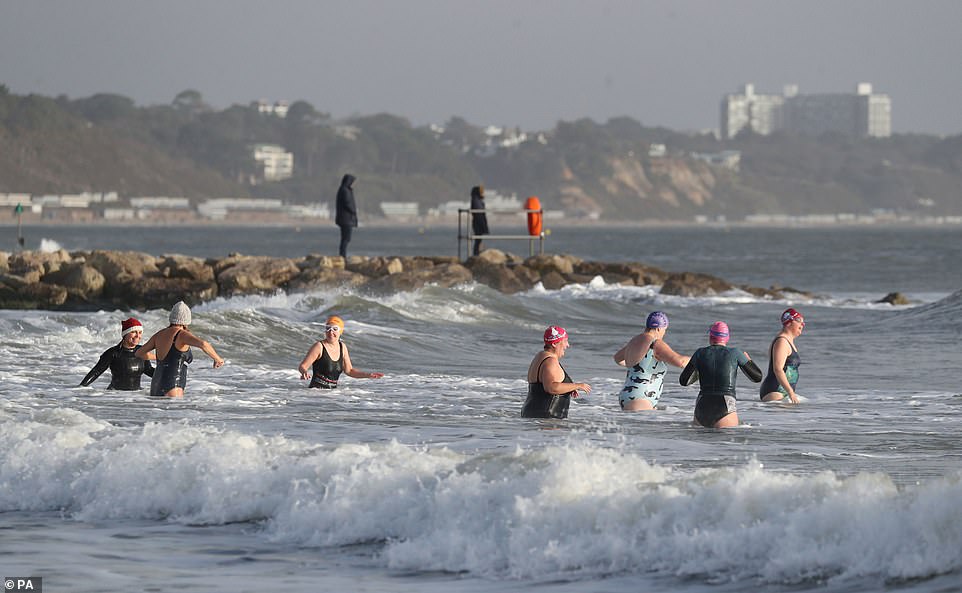 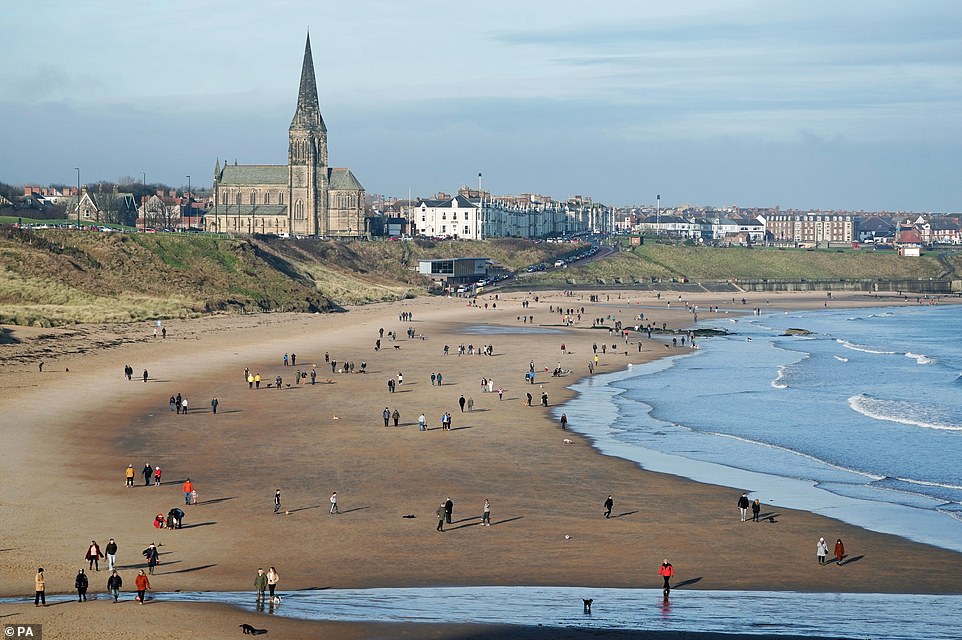 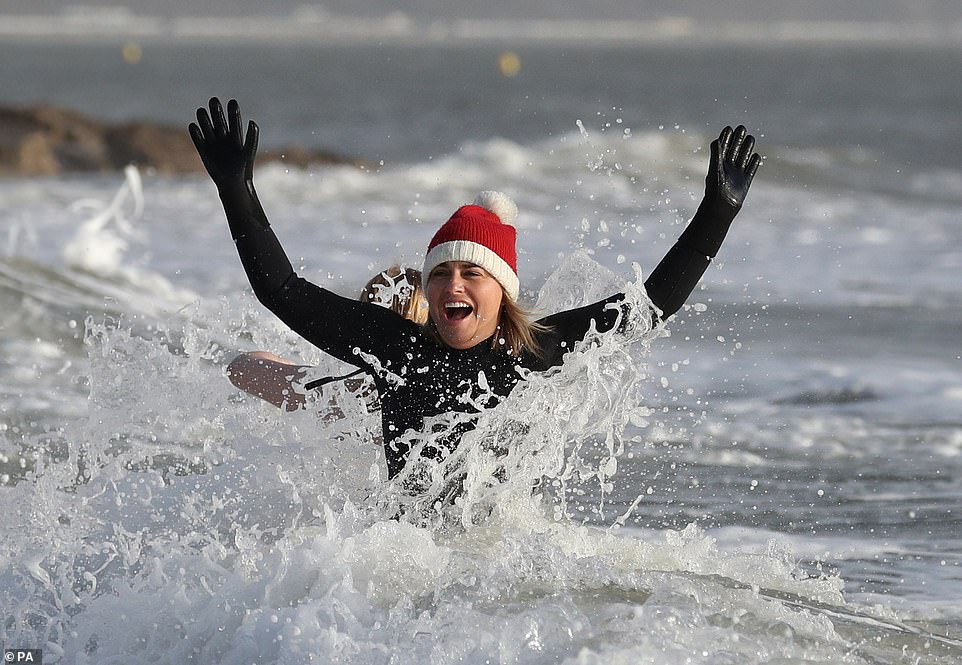 Carol Holt, flood duty manager at the Environment Agency, said: ‘While the weather outlook is improving, rivers continue to respond to recent rainfall meaning that there is a continued risk of flooding in parts of southern and central England over the next few days.

‘We continue to monitor rainfall and river levels closely and to operate our flood defences, reducing the risk of flooding to thousands of homes and businesses.’

Greedy brothers forced to give away 17,000 hand sanitizer bottles they tried to sell for $70 each after massive backlash – The Sun