How to get disengaged students interested in their English studies is a constant question for many educators. 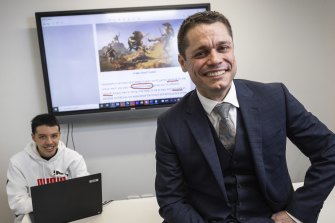 “A lot of these kids are struggling with the mechanics of English but they can’t focus because the content is inaccessible to them; we were doing texts they don’t understand,” he said.

“So when we take that barrier away and they know the content then we can focus on the mechanics.

“They’re really into their computer games so let’s tap into that.”

This thinking led Mr Sproule to create Level Up: Game-based Writing, an English elective in which his students run their own website which publishes their articles about and reviews of video games.

The subject has been a hit. It became so over-subscribed that the school now runs three classes for just over sixty students, almost entirely boys.

Student Julian says he likes the subject because he has been offered a choice while for his classmate Gabe it is simply more interesting than his other classes.

“Video games are a big part of my life and mixing a boring class with one of my favourite things in the world makes a great class,” he said.

Many of the students have disabilities that make learning more difficult so Mr Sproule said it was a source of great pride to watch them become passionate about their writing projects.

“We have a no-homework policy at the school but they’re messaging saying they’re writing them at night ready to be published first thing in the morning,” he said.

Head of Curriculum at the University of New England School of Education Dr Robyn Cox said initiatives such as Level Up were a fantastic thing for schools.

“People are trying to innovate all the time, absolutely,” she said.

“It’s multi-modal literacies – everything they’re doing when gaming. There is really strong outcomes research that shows those skills are transferable.”

Dr Cox said while innovation was admirable and important, educators had to walk a fine line to ensure the curriculum still aligned with set teaching standards and assessments.

This was something top of mind for Mr Sproule who made taking a mainstream English subject part of the requirement for Level Up. He said the positive effects of the class were flowing on to the rest of the students’ studies.

“I walked past two kids and they were talking about commas. I’ve been teaching eight years and I’ve never seen two sporty kids discussing punctuation before.

“That was a lightbulb moment; like this is something we’re really going to be able to work with.”

Ross Huggard, a council member of the Victorian Association for the Teaching of English, said Victorian schools had a history of evolving subject content to meet student interests.

“Victoria was actually at the vanguard of introducing films into English studies,” he said.

“It’s all about showing students English has different elements and it’s necessary in different ways, to help them recognise there are different ways English operates that are relevant to them and they often don’t see that, they think it’s dry, dusty hard work and it’s not.”