His face obscured by a Covid mask, the small man stands among throngs of migrants near a dense forest in Dunkirk.

He is 30 years old and watches quietly as the French police dismantle a nearby shanty camp where thousands have waited this year to get on boats from northern French beaches to Britain.

‘It is easy for these people to reach the UK,’ he boasts to me in perfect English, even though he is an Iraqi Kurd. ‘All you need is money. The more you have, the easier it is.

‘The police can pull down the camps, but the migrants will hide in the forest and then come out to catch boats across the sea.’

The shadowy figure is a people trafficker who spoke to me last week on condition of anonymity. 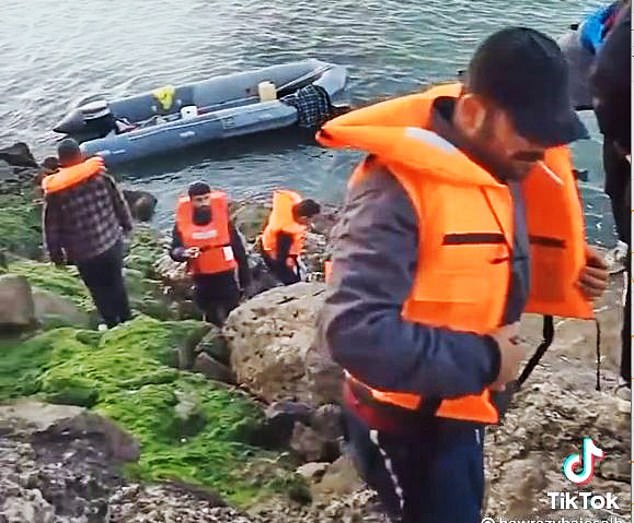 Our conversation took place as the Mail established that rival people smuggling gangs are posting videos online to compete for business – using actors to play migrants ‘crossing’ to the UK.

The man in the Covid mask is a key player in one of Dunkirk’s ten gangs which, with ruthless efficiency enforced by guns, organise the never-ending migrant flow to the UK’s south coast.

He owns a Dunkirk restaurant and has settled in France. But he travels to the UK regularly, he says, to see his extended family in London where he came to live at 18 as an asylum seeker.

‘What is wrong with us sending migrants going to the UK?’ he asks me boldly. ‘Britain needs more workers and we Iraqi Kurds work hard.’

Traffickers have gained the upper hand here. They run rings around the French police and are not afraid of anyone. Which is why the man I met last Thursday was prepared to speak to me so openly even though I am a journalist.

Yet they are dangerous characters. They push migrants who dither on to boats at gunpoint. Their gangs fight each other over the control of the boat crossings which make them millions.

They are at the root of what Home Secretary Priti Patel last week admitted is a ‘migration crisis’.

One that a prominent but anonymous Tory party donor warned this weekend could destroy the Government, as a new poll showed 77 per cent of Tory voters say its approach is too soft.

The traffickers know there is insatiable demand for passages on their boats. They are pushing at an open door.  On Friday, the former chief immigration officer for UK Border Force, Kevin Saunders, explained that migrants ‘know they’ve won the jackpot’ when they reach Britain.

‘The biggest draw is these people know everything in the United Kingdom is free, they are going to get education, medical treatment, money, accommodation.’

What’s more, he added, they ‘know that they’re not going to be removed, this is why they destroy all their documentation (in the Channel in sight of Dover)’. 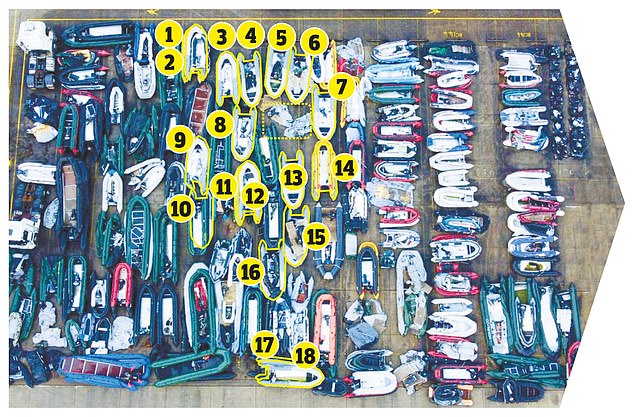 Trafficker boat of choice: Eighteen grey dinghies, like the one in the video, in a Kent warehouse after being seized

The traffickers compete violently for customers to smuggle across the world, slip into Europe, and bring to Dunkirk beaches from where 24,000 – hundreds this weekend alone – have embarked this year.

A video showing migrants how easy it is to sail to the UK unchallenged is on the social media site TikTok. Incredibly, it was made by traffickers to ramp up their trade.

With supreme confidence, six men – one puffing casually on a cigarette – step out of a people smugglers’ dinghy on to a beach, disappearing along a sea wall for a new life in Britain.

The video is accompanied by a jaunty soundtrack of a popular Kurdish song which includes the lyrics: ‘We are here, we did not die.’

That, at least, is the happy scenario the video-makers want those watching it to believe. In fact, the film was faked. It was shot not on the Kent coast but on the outskirts of Dunkirk, with its distinctive skyline of three large liquefied natural gas storage tanks near a tall lighthouse.

And the men in the video who step out of the inflatable, left behind bobbing on the sea, are trafficker actors – not migrants reaching the UK.

‘The smugglers made it as a “come-on” advertisement to migrants,’ explains an immigration expert who advises the Government.

‘It sends a message that it is easy to cross the Channel, disappear into the UK, and the sea journey is safe.’

Tellingly, the two-tone grey dinghy in the video has a colour and design which link it to a Dunkirk-based Kurdish Iraqi smuggling gang that uses it routinely for crossings. The inflatable is custom-made at a Turkish factory and then transported across Europe, via Germany, to the beaches of France for migrants to board.

Earlier this year, we found 18 identically designed inflatables – both medium and mega-sized – in the ‘dinghy graveyard’, a Kent government warehouse where migrants’ discarded vessels are piled high.

A mega-boat with the same two-tone colour scheme was also pictured being towed into Dover harbour by the Border Force vessel Hurricane after a mass Channel rescue this summer.

Our source explains: ‘The grey inflatable has become the traffickers’ boat of choice. This design is being bought in bulk by smuggling gangs. It is deliberately manufactured without logos or identifying insignia to make it tricky to trace back to the Turkish factory where it is built.

‘We fear Iraqi Kurdish traffickers now have their own factory in Turkey churning out these basic and anonymised grey boats.’

It is predicted that sea arrivals by the end of the year will hit far more than 30,000.

‘We have 24-hour, seven day a week surveillance. There are multiple departure attempts every two miles. We will stop one, two, three, four – but if we are busy elsewhere, the fifth or sixth will leave.’

This autumn, the numbers waiting in Dunkirk have grown with the arrival of Afghans fleeing the Taliban and other nationalities from the Belarus-Poland border.

Meanwhile, Lucy Moreton, head of the Immigration Services Union, has warned criminals (or those hoping to harm us) are evading Border Force sea and land patrols to get into the UK undetected.

‘Since we don’t catch them, the reason they don’t want to be collected by us is speculative. But it is most likely they have a past criminal record, either in the UK, in Europe or their home countries, that they don’t want us to know,’ she says.

In July, the Mail saw a large group arrive near Kent’s Dungeness power station after being shepherded to safety by an RNLI lifeboat. They had travelled from France in a black mega-inflatable abandoned on the shore after they had disembarked.

Tellingly, the vessel had a large orange guard on its outboard propeller, a feature that meant it had been specifically designed by the traffickers for a secret beach landing, according to an immigration official.

‘These migrants did not expect – or want – to be found by border force or a lifeboat,’ he says.

‘The guard was put on to allow an undamaged and undetected landing on what the traffickers know will be a stony beach in Kent. They don’t want to be caught up in the asylum system for years.’

The same week, a group – thought to be Iraqi Kurds – arrived on an inflatable at Kingsdown beach near the White Cliffs of Dover. They hid in a village churchyard before reaching the garden of a house.

When the owner found them, they asked him for bottled water and a charging point for their mobile phones.

A villager told us: ‘They also asked to sleep in the owner’s garden overnight. They said they were going to be picked up by a car the next day to be taken to Manchester.

‘He alerted Border Force who came and took them away.’

Migrant escapees near Folkestone, Kent, have been spotted catching buses and walking along suburban streets towards the train station with fast direct routes to London.

One afternoon the Mail tracked four migrants who had beached along the coast in Dover and ran off, discarding their boat. An hour later, we found them walking briskly up the A2 above the port towards a blue Ford parked beside a roundabout.

Its bearded driver, in his early 40s, was standing by it using a mobile phone. When he spotted us, he immediately drove off speedily.

The four migrants running towards him, also holding mobile phones, disappeared into nearby cornfields. We photographed the Ford and its registration number, handing both to Kent police.

A DVLA database check revealed that it had originally been grey. The car had either been resprayed or the registration plates were fake.

And what of the TikTok video found by the Mail with its trafficker actors? British immigration intelligence officers are searching for the gang that posted it and the origins of the grey two-tone inflatable shown on the seashore.

A Home Office spokesman condemned the clip: ‘To promote or glamorise these crossings is disgraceful. It encourages people to leave safe countries and put their lives at risk.’

Miss Patel has written to TikTok, warning the company to remove ‘unacceptable’ videos promoting the ‘deadly activity’ of Channel crossings.

And that will not please the dark-haired Iraqi Kurd trafficker who boasted to me in Dunkirk how easily migrants sail into Britain.

Is Britain's Covid vaccine roll-out on the brink of disaster?