‘Super-spreader’ events like choir practices, gym classes and business conferences may be responsible for 80% of coronavirus cases, scientists say

Experts analysing the pandemic found many outbreaks of COVID-19 infections can be blamed on so-called ‘super-spreading’ events.

One of the best examples of this, they said, is a choir rehearsal in Washington State where 87 per cent of the 61 singers ended up with the infection.

Scientists at London School of Hygiene and Tropical Medicine say, in most cases, these outbreaks are traced back to a singular highly infectious person.

Around one in ten people who get the virus are so-called ‘super-spreaders’ because they are very infectious and pass the coronavirus on to lots of people.

The majority of COVID-19 cases, around 80 per cent, are caused by this small group of highly infectious people.

The researchers said the focus of controlling the epidemic should be to limit events where super-spreaders could wreak havoc.

Super-spreading is known to occur in care homes, hospitals and religious places – but the scientists say other unusual events can lead to clusters of cases. 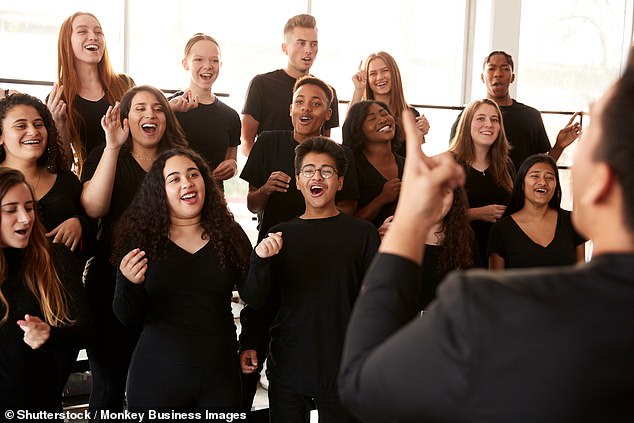 Choirs, gym classes and business conferences and other ‘superspreader events’ may be responsible for most coronavirus cases, scientists say (stock) 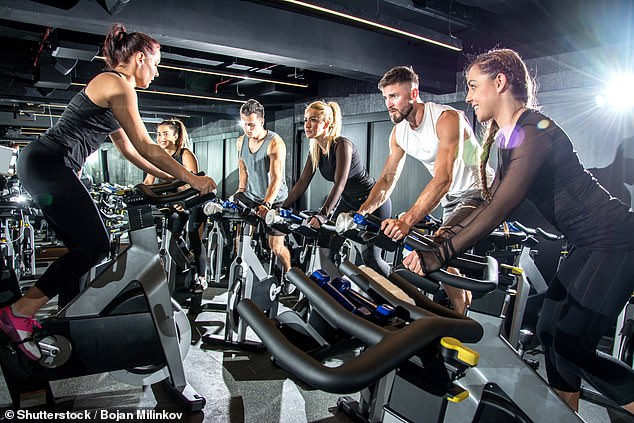 Gyms lend themselves as the perfect place for the virus to spread, due to the setting and because there are many people (stock)

The research by LSHTM and the Alan Turing Institute suggests there is variability in the number of people that an individual passes the virus on to.

They applied a mathematical model to outbreaks in various countries and published their findings in Wellcome Open Research.

The findings show that around 80 per cent of COVID-19 transmission was caused by a very small number of individuals.

These people make up around ten per cent of all infected patients, therefore their attack rate is very high. They may be called ‘super spreaders’.

But one of the authors of the paper, Dr Adam Kucharski, told MailOnline that super-spreader events are not just due to people but also the environment.

He said: ‘We should be cautious about assuming there are a few specific people that always drive transmission.

‘It’s likely that events and environments are more important than specific individuals. It’s probably more a case of “super-settings” than “super-spreaders”.’

SHOULD THE TWO METRE SAFE DISTANCE BE DITCHED?

A former Conservative Party leader has called on the Prime Minister to reconsider the two-metre social distancing rule to ‘get the economy moving’.

Iain Duncan Smith said the UK is the ‘only country in Europe’ using the measure, with Germany using 1.5 metres and France and Italy using only one metre.

Current government guidance stipulates that you be be two metres apart from anyone not in your household.

But the distance differs from advice given by the World Health Organisation. The guidance on the website says: ‘Maintain at least 1 metre (3 feet) distance between yourself and others. ‘

The reason for this as stated on its website is that: ‘When someone coughs, sneezes, or speaks they spray small liquid droplets from their nose or mouth which may contain virus. If you are too close, you can breathe in the droplets, including the COVID-19 virus if the person has the disease.’

The two metre rule can be traced back to research in the 1930s that showed droplets of liquid from coughs or sneezes would land within a one-two metre range, as reported by the BBC.

Iain Duncan Smith is not the first to criticise the UK’s adopting of the two metre rule, out of line with many other European countries.

Robert Dingwall, from the New and Emerging Respiratory Virus Threats Advisory Group (Nervtag), previously said in April the rule was ‘conjured up out of nowhere’.

Mr Dingwall told Radio 4’s Today: ‘We cannot sustain [social distancing measures] without causing serious damage to society, to the economy and to the physical and mental health of the population.

‘I think it will be much harder to get compliance with some of the measures that really do not have an evidence base. I mean the two-metre rule was conjured up out of nowhere.’

The study suggests the reproduction number – the average number of secondary infections produced by one infected person – can be reduced by focusing not on the population as a whole but super-spreader events.

Dr Kucharski said: ‘We’ve known super-spreading events are important for other coronaviruses, like SARS and MERS, and this initial analysis suggests they are similarly important for COVID-19.’

The LSHTM researchers wrote in their paper: ‘As most infected individuals do not contribute to the expansion of an epidemic, the effective reproduction number could be drastically reduced by preventing relatively rare super-spreading events.’

Super-spreader events have been pinpointed to choirs on a number of occasions.

The Centre for Disease Control and Prevention reported a large outbreak that was the result of a choir rehearsal in Washington State on March 10.

Some 61 of the choir’s members attended the rehearsal, and one person had ‘cold like’ symptoms at the time. They later tested positive for COVID-19.

The rehearsal lasted for two-and-a-half hours, with attendees reportedly taking precautions not to mingle too much because they were aware the virus was already in the US.

Ultimately, an estimated 87 per cent of attendees later got sick. This includes 32 confirmed cases and 20 probable. Two people died.

But the singers would also have been chatting closely in breaks, sharing snacks and stacking chairs at the end of practice.

In Amsterdam, 102 of 130 choir members became sick with COVID-19 days after their last performance on March 8 before the lockdown in The Netherlands.

During the course of the pandemic, a number of outbreaks have been traced back to a business conference attended by hundreds of people.

For example, a biotech conference held between February 26 and 27 led to the spread of coronavirus from Massachusetts to Indiana, Tennessee, North Carolina and even Europe.

The official number of people who got sick due to that conference held by Biogen was 99, all stemming from a couple of senior executives who did not known they had the virus.

One of Britain’s first coronavirus cases was as a result of a conference held in Singapore.

The man, Steve Walsh, from Hove, was one of 104 attendees at a conference at the Grand Hyatt Singapore hotel on Jan 20-22.

At the time, it was reported at least four people in Singapore, three Asian businessmen, a Malaysian man and two South Koreans had been diagnosed with the virus after returning from the conference.

Mr Walsh went on to travel to a chalet in the French Alps, which led to a further 11 people falling ill, technically becoming a ‘superspreader’ himself.

The Centre for Disease Control and Prevention reported a large outbreak that was the result of a choir rehearsal in Washington State. Some 52 people became sick as a result of one index case (pictured). A total of 61 people attended the rehearsal 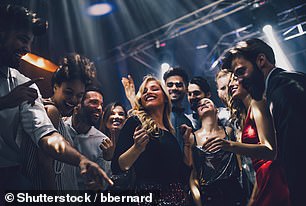 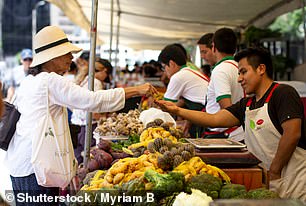 One of the authors of the paper, Adam Kucharski, told MailOnline: ‘It’s likely that events and environments are more important than specific individuals. It’s probably more a case of “super-settings” than “super-spreaders”‘

Gyms also lend themselves as the perfect place for the virus to spread, due to the setting and because there are many people.

A dance class in South Korea is an example of this, being linked to 112 cases of COVID-19.

Researchers who investigated the outbreak said it started with 27 gym instructors who attended a workshop, in which they learned routines for four hours.

Eight of them later tested positive for COVID-19.

But before that, while they had mild symptoms, they had taught classes across 12 different gyms a week after the workshop.

All together, 54 students out of 217 developed COVID-19 from the instructors – an attack rate of 23 per cent. Family members went on to catch the virus from the students.

The authors wrote in Emerging Infectious Diseases: ‘Characteristics that might have led to transmission from the instructors… include large class sizes, small spaces, and intensity of the workouts.

‘The moist, warm atmosphere in a sports facility coupled with turbulent air flow generated by intense physical exercise can cause more dense transmission of isolated droplets.’

Nightclubs and packed markets are also examples of where a COVID-19 ‘superspreader’ event could occur.

A popular ski resort with party goers, known as ‘Ibiza of the Alps’ has been at the centre of attention amid Europe’s coronavirus crisis.

The resort of Ischgl in the Tyrolean Alps has hundreds of tourists from across Europe in February half term. They piled into bars such as Kitzloch.

In April, Austria’s public health agency said that Ischgl was the source of the country’s biggest cluster of coronavirus cases, infecting more than 800 Austrians.

Up to twice as many people from abroad fell ill, particularly in Germany and Scandinavian countries, as well as Britain.

Marketplaces have also been implicated in some outbreaks.

Peruvian police closed a busy food market in the capital Lima after mass rapid testing confirmed more than 160 of its traders had tested positive for COVID-19 in April.

‘When people buy potatoes, or lettuce or any other product, they will take COVID-19 home with them,’ President Martin Vizcarra said at a news conference, Reuters reported.

Pastor who said his congregation would ‘rather die than miss church’ to hold Easter service with 1,000 people – The Sun