Singapore: AUKUS and Australia’s acquisition of nuclear-powered submarines will serve as a warning to China not to overreach or face “possibly devastating” consequences, says Philippine Foreign Secretary Teddy Locsin jnr in the strongest backing yet of the defence pact from south-east Asia.

Locsin, a former journalist who made headlines this year when he tweeted that Chinese vessels needed to “get the f— out” of Philippines waters, also declared on Thursday that Myanmar military chief Min Aung Hlaing should be excluded from an upcoming summit of regional leaders. 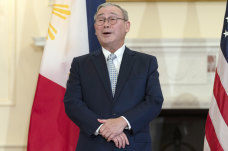 Teddy Locsin speaks while meeting with US Secretary of State Antony Blinken in Washington DC in September.Credit:AP

Speaking at a Lowy Institute online event, he said AUKUS strengthened deterrence “because when one power is too far away, the other power may think that proximity gives them an advantage”.

“But when the whole area of the future battlefield is just swarming with really deadly weapons, that clears the mind, focuses thinking and makes them realise never overreach because the response would be immediate and possibly devastating,” Locsin said.

The defence establishment in the Philippines, a US treaty ally, has acknowledged Australia’s right to improve its maritime capability, however, and Locsin would like Australia’s role in the region enhanced even further with membership of economic union the Association of South-east Asian Nations.

“I want Australia to be part of ASEAN. ASEAN is not an ethnic, cultural or in any way Asian grouping. It is a geographical grouping for regional defence and regional stability,” he said.

“What rounds out the circle of security is the anchor of Australia right underneath.”

There was also unexpected indifference to AUKUS and Australia’s submarines from Cambodia this week after its Foreign Minister Prak Sokhonn spoke to Australian counterpart Marise Payne.

The Hun Sen government “expected that AUKUS will not fuel unhealthy rivalries and further escalate tension,” according to an official Cambodian account of the meeting.

That has been the misgiving of Malaysia and Indonesia, which fear a continuing build-up of arms and competition.

Their apprehension prompted Australia to send David Johnston, the Vice Chief of the Defence Force, to south-east Asia to further explain AUKUS.

His talks in Malaysia haven’t changed the view in government there, however, with Defence Minister Hishammuddin Hussein telling parliament this week he had stressed to Johnston that “Malaysia does not want to be dragged into the geopolitics of the considerations of huge powers”.

Hishammuddin, who said Johnston had told him AUKUS was not a military alliance but a collaboration for nuclear-powered submarine technology, “also emphasised that Malaysia’s stand will not budge”.

“That is, any problems, differences and disputes must be addressed, consistently and clearly through dialogue and consultation,” he said.

Locsin on Thursday also weighed on the ongoing crisis in Myanmar as ASEAN foreign ministers on Friday meet to discuss not inviting its junta leader to the bloc’s next summit.

Eight months after staging a coup, the military won’t allow ASEAN’s special envoy to meet with ousted civilian leader Aung San Suu Kyi, who is on trial on various charges and has been held under house arrest and elsewhere since February.

Locsin said he was “pretty definitive” about excluding the military chief from the ASEAN leaders meeting.

“If we relent in any way, our credibility as a real regional organisation disappears,” he told the Lowy event.

“We’re a bunch of guys who always agree with each other on the worthless things, things that don’t count to the world. Well, I don’t know what that is, but it doesn’t seem like a vibrant alliance or regional grouping.”