Sweden has the highest death rate per capita than any country in the world this week, data shows

Sweden has the highest coronavirus death rate per capita than any country in the world over the past seven days.

The country, which refused to impose a lockdown, has seen 5.59 deaths for every million people per day on a rolling seven-day average in the week to May 29.

That rate is an astonishing 11 times higher than the world average of 0.49 deaths for every million people over the same period. 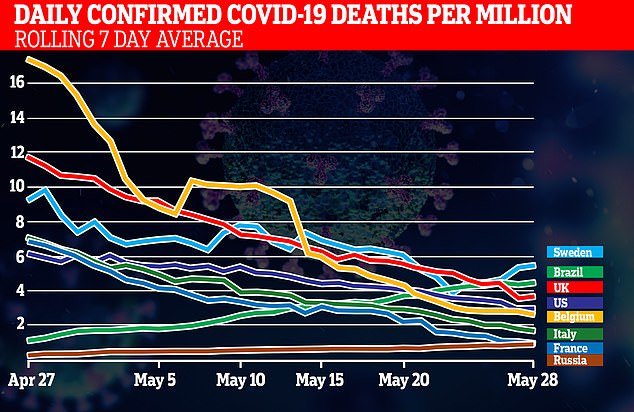 Sweden’s rolling 7-day average death rate is an astonishing 11 times higher than the world average of 0.49 deaths for every million people over the same period

Despite the rolling average, Sweden does not have the highest coronavirus death rate per million people since the outbreak started.

The latest figures for 29 May show that title goes to San Marino, which has seen 1,238.55 deaths for every million. 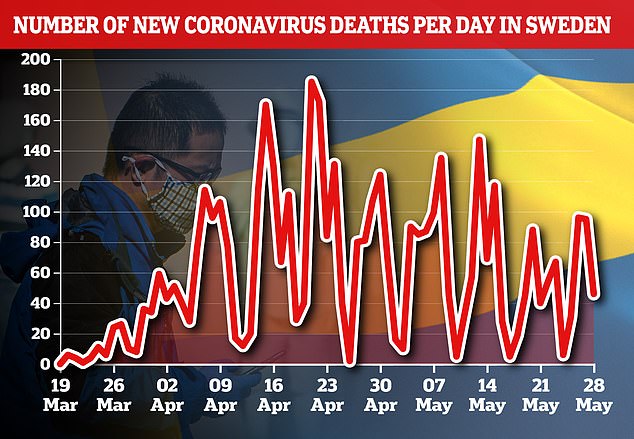 France sits in sixth place, with 439.11 coronavirus deaths for every million people since the crisis started, and Sweden is behind with 422.41.

While figures for Spain have not yet been released for 29 May, data for the previous day shows the country has a death rate of 580.03 for every million people.

It is also worth noting that all of the countries listed – particularly with reference to the rolling seven day average – have experienced the peak of the virus at different stages.

Latest figures for the Sweden reveal a total of 35,727 confirmed cases of coronavirus and 4,266 deaths as of 28 May.

Sweden’s strategy to battle coronavirus has been largely based on voluntary measures regarding social distancing and basic hygiene.

At the same time the Scandinavian country kept schools open for children under the age of 16, along with cafes, bars, restaurants and businesses.

Their approach has been both criticised by some as a dangerous experiment gambling with people’s lives, but also pushed as a future model by the World Health Organization.

A recent study found that based on 1,100 tests carried out across the country, just 7.3 percent of Stockholm’s population had developed antibodies by late April. 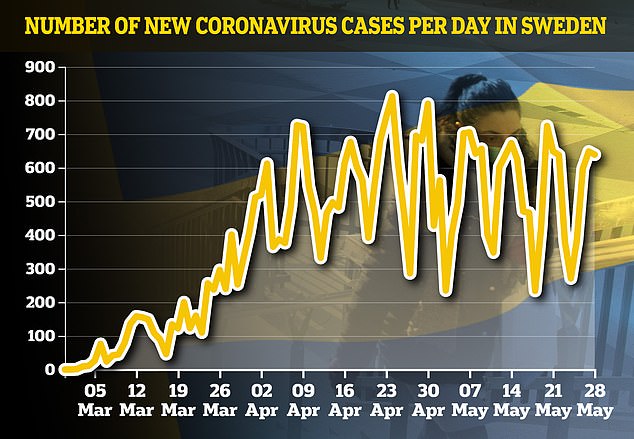 The antibody study sought to look into the potential for herd immunity, a situation where enough people in a population have developed immunity to an infection to be able to effectively stop that disease from spreading.

‘It is a little bit lower (than expected) but not remarkably lower, maybe one or a couple of percent,’ Chief Epidemiologist Anders Tegnell told a news conference. ‘It squares pretty well with the models we have.’

But the WHO has warned against pinning hopes on herd immunity. It said in mid May the week global studies had found antibodies in only 1-10 per cent of the population, results in line with recent findings in Spain and France.

Local media have raised concerns that Swedes could be excluded from other countries as curbs on travel are relaxed, both in the Nordic region and elsewhere in Europe.

News that Cyprus will not permit direct flights from Sweden when it opens up on June 9, but will allow in flights from Norway, Denmark and Finland, was widely reported with public service broadcaster SVT running the headline ‘Swedes barred when Cyprus opens up’.

And today the Swedish Prime Minister Stefan Lofven revealed that on-site education for high schools will re-open from 15 June, having been closed since mid-March.