Home » World News » Terrifying moment horse rider, 15, slams into the side of a lorry

‘Millimetres’ from disaster: Terrifying moment horse rider, 15, slams into the side of a lorry after the animal was ‘spooked’ as the HGV driver ‘made no attempt to slow down’

Heart-stopping footage shows the moment a teenage horse rider came ‘millimetres from a different story’ after hitting the side of a lorry when it failed to slow down.

Grace Crofts, 15, was riding her horse Bella alongside step-sister Ellie Jarosiewicz, 17, just minutes away from their yard when a wagon drove past at about 40mph, despite the Highway Code stating drivers should slow down to 10mph when overtaking a horse.

Dashcam footage shows four-year-old Bella becoming spooked and trying to turn away from the HGV but, in a panic, she and Grace crashed into the side of the vehicle.

Grace went to hospital the following day where she was treated for a muscle injury to her left leg after it slammed into the lorry and is suffering flashbacks from the incident on October 2.

South Yorkshire Police have launched an investigation into the incident in Staincross as Grace’s mum says she ‘could have been arranging her funeral now’. 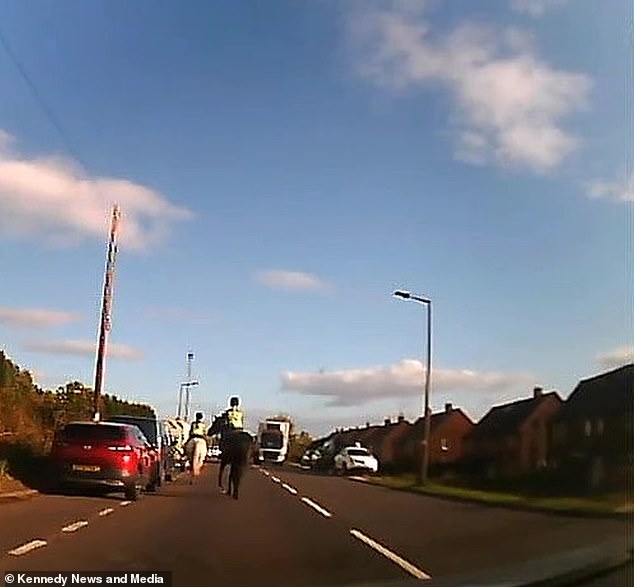 The lorry can be seen approaching Grace and her step-sister Ellie riding horses on the road in Staincross, south Yorkshire 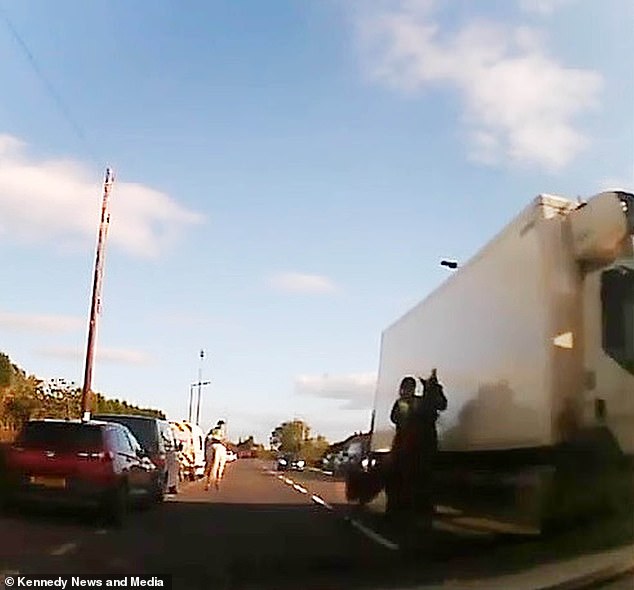 This is the heart-stopping moment Grace’s horse collided with the lorry, causing the teen to be injured 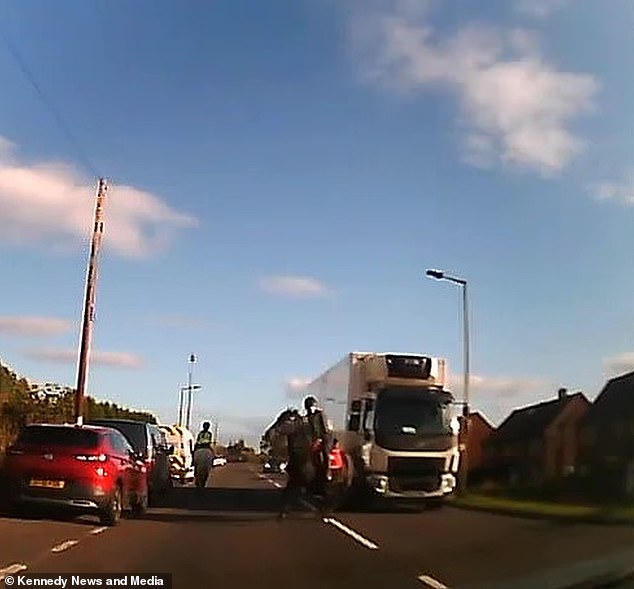 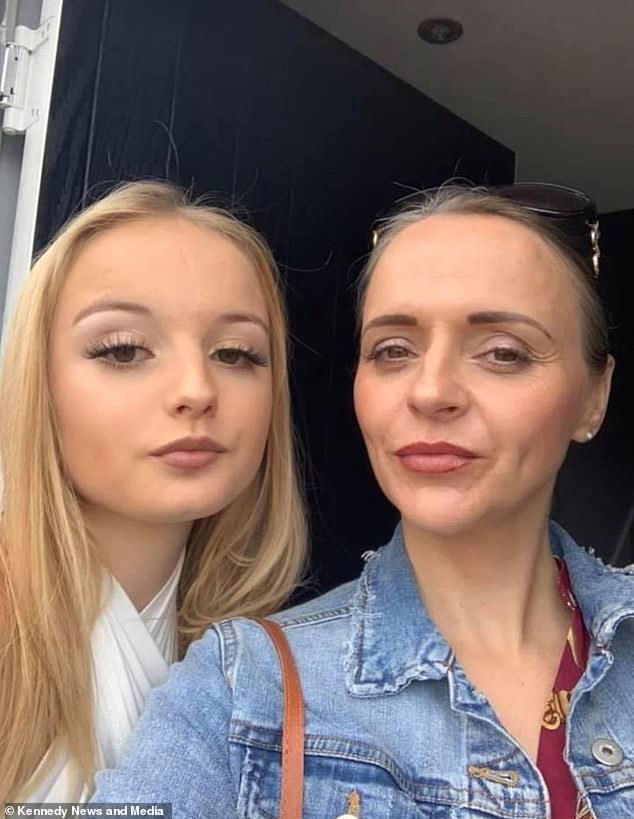 Grace Crofts, 15, and her mum Zoe Jarosiewicz, 42, have spoken out about the incident on October 2

Dashcam footage shows the sisters and their horses being overtaken by two slow-moving cars on the 40mph road before a large white vehicle comes into view from the opposite direction.

The lorry did not stop following the incident, it was reported.

Terrified Zoe phoned her mum Zoe Jarosiewicz, 42, who raced to the scene and helped Grace home.

Residential lettings manager Zoe posted an appeal for information on Facebook and a witness came forward with the shocking dashcam footage.

Grace, from Barnsley, South Yorks, said: ‘Me and my sister were out on our horses and Bella has been down that road plenty of times.

‘Two cars overtook us and the wagon didn’t slow down and carried on going at around 40mph so Bella got scared, tried to turn from the situation but we crashed into the lorry.

‘It happened too fast for me to feel anything. Nothing went through my head, it was too fast.

‘My leg is killing because I’ve got a muscle injury [from the incident] but I didn’t feel it because of the shock but after it was shaking and my boot was scuffed.

‘One person stopped and asked if we’d want dash cam footage and to see if we were OK.’ 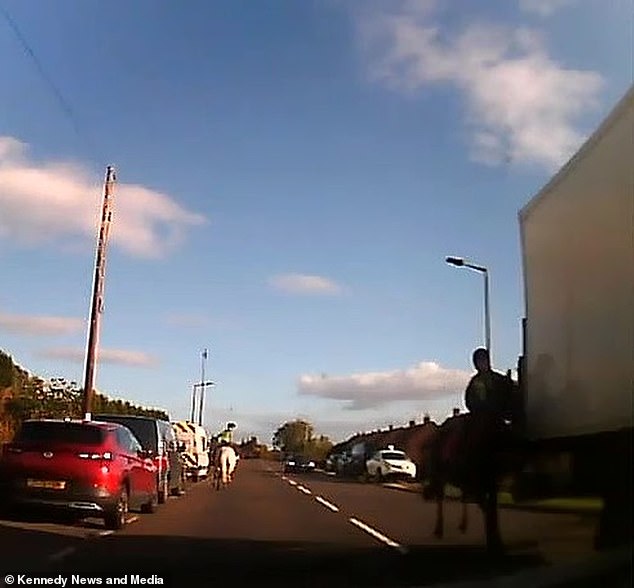 The driver of the lorry did not slow down or stop following the incident, the family revealed 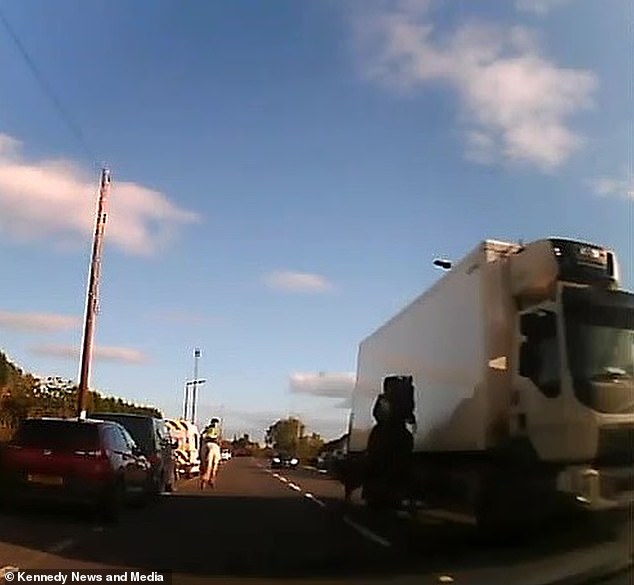 A spokesperson for South Yorkshire Police said: ‘We received a call at 7:08pm on 2 October for reports of a horse being spooked by an HGV driver on Windhill Lane in Staincross.’ 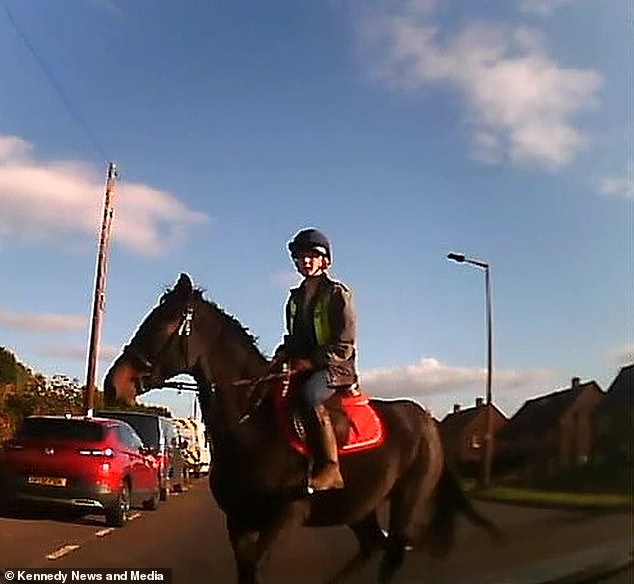 The 15-year-old pictured moments after she and horse Bella collided with the lorry, as the incident was caught on dash-cam footage 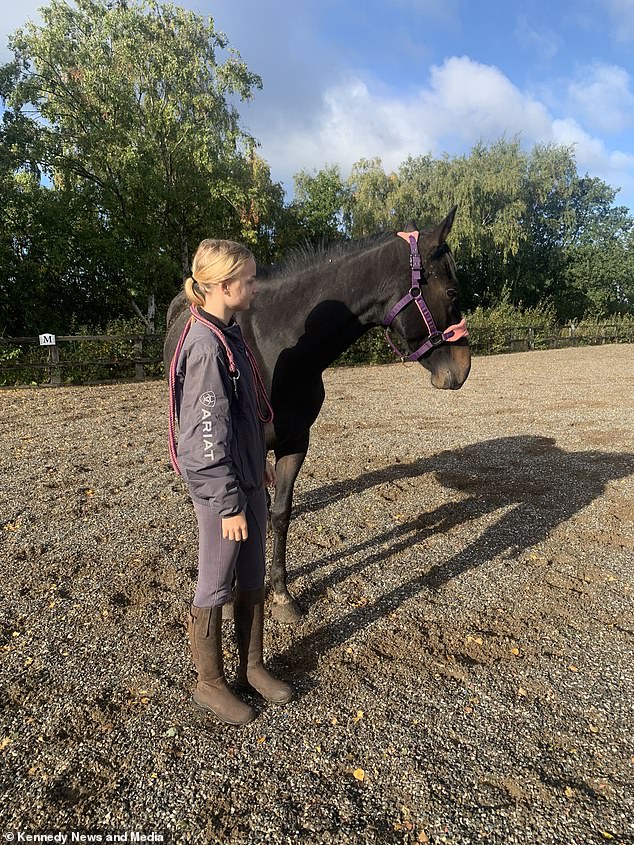 Zoe said: ‘It was hard to understand, she said she’d been hit by a lorry so I thought the worst, but she was on the phone. We ran down and were in shock, we were trying to be strong for Grace.

‘I could have been arranging my daughter’s funeral now, it was millimetres from being a different story.

‘The video sickened me, we haven’t slept. Grace isn’t sleeping, she’s having flashbacks. When I close my eyes all I can see is the video.

‘Ellie isn’t sleeping as she saw it happen. She heard the horse scuttle and turned around and saw the horse hit the wagon. They’re bewildered with it and shocked.’

Zoe added: ‘He made no attempt to slow down and that’s the maddening thing.’

Grace has been around horses all of her life but Zoe says that she doesn’t know if her daughter will ever feel safe again.

She says Bella is also traumatised by what happened.

Zoe said: ‘Fingers crossed Grace will go out again but Bella is traumatised and jumpy.

‘We’ll have to take our time and do a lot of groundwork, she’s really calm and good.

Grace said Bella is usually good with traffic and they take her out five times a week. 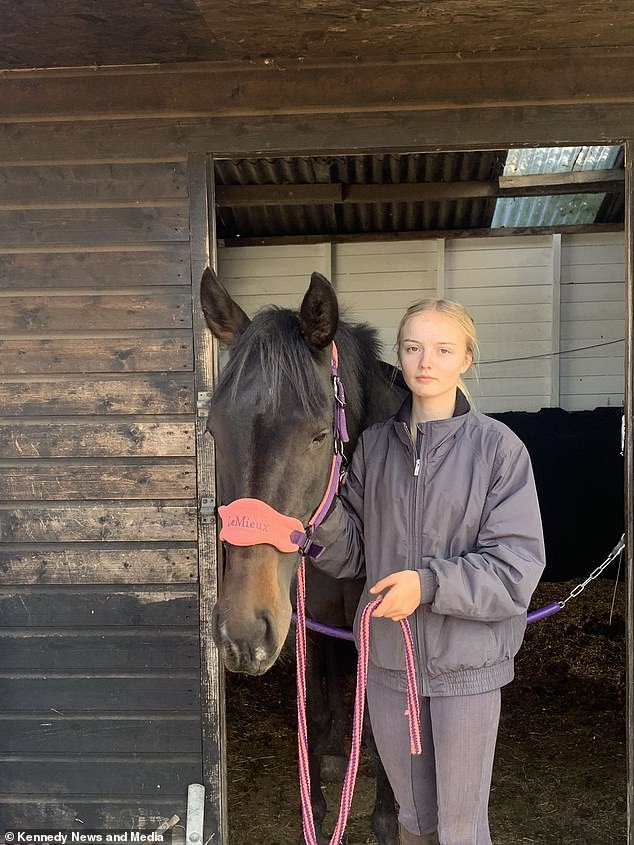 The Highway Code states: ‘When you see a horse on a road, you should slow down to a maximum of 10 mph.

‘Be patient, do not sound your horn or rev your engine. When safe to do so, pass wide and slow, allowing at least two metres of space.’

Zoe is sharing the footage in the hope of raising awareness and to educate drivers on how they should behave when they see a horse.

She said: ‘Five seconds is all it will take to slow down and go around. It could be your child or one of your relations.

‘There needs to be more awareness. I hope he gets suspended, he shouldn’t be on the road until it’s been investigated.’

A spokesperson for South Yorkshire Police said: ‘We received a call at 7:08pm on 2 October for reports of a horse being spooked by an HGV driver on Windhill Lane in Staincross.

‘The caller reported that the driver’s inappropriate driving manner while passing the horse caused the horse to spook and the rider to fall.

‘The rider, a 15-year-old girl, suffered minor injuries to her leg.

‘Enquiries are on-going and anyone with information is asked to provide information via the SYP website and reporting portal quoting incident number 669 of 2 October, or call 101.’

Lawyers for Ben Roberts-Smith call for explanation over ‘buried’ material

Evil wife helped paedo husband rape girl, 12, telling victim to squeeze hand if in pain while being abused – The Sun