Bangkok: Thai navy ships and helicopters are searching for more than two dozen sailors still missing more than 12 hours after a warship sank in rough seas overnight in the Gulf of Thailand.

As of noon, Bangkok time, 75 sailors from the HTMS Sukhothai corvette had been rescued and 31 were still in the water, the navy said. The high waves that caused the accident had lessened since Sunday night’s sinking, but were still high enough to endanger small boats, the navy announced.

A rescued crew member interviewed by Thai PBS television said he had to float in the sea for three hours before he was rescued. He said that the ship was buffeted by 3-metre high waves as it was sinking, complicating rescue efforts.

Strong winds blew seawater onto the HTMS Sukhothai and knocked out its electrical system, making control of the ship difficult. The navy dispatched three frigates and two helicopters with mobile pumping machines to try to assist the disabled ship by removing the seawater but it couldn’t do so because of the strong winds.

The loss of power allowed more seawater to flow into the vessel, causing it to list and sink. 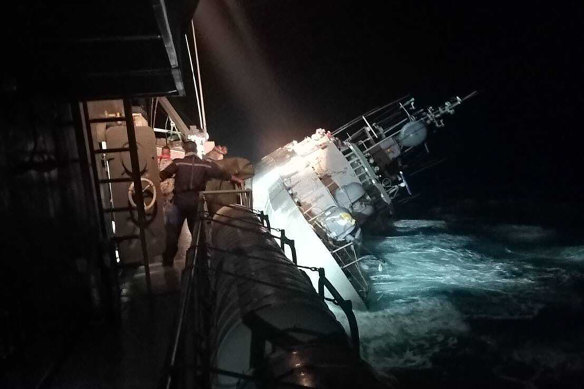 The HTMS Sukhothai corvette warship lists off the coast of Prachuap Khiri Khan province, Thailand, on Sunday night. It has now sunk.Credit:Thai Navy/AP

The warship had been on patrol at sea 32 kilometres from the pier at Bangsaphan district in Prachuap Khiri Khan province. Pokkrong said the ship had been on its regular patrol to assist any fishing boats needing help.

“Our top priority now is to rescue all the sailors. We will plan to have the ship salvaged later,” he said. The search was being conducted in an area of 16 square kilometres around the site.

While northern and central Thailand are seeing their coldest temperatures of the year, far southern Thailand has been experiencing storms and flooding in recent days. Ships were warned to stay ashore.