Home » World News » The end of May could come in June, as unpopular Tories confront PM

London: Theresa May could have only weeks left as British Prime Minister after agreeing to set out her timetable for stepping down – following one more shot at getting her Brexit deal through Parliament in early June.

If she fails to win support for the deal, which has already been rejected three times by the House of Commons, she could resign immediately, according to British media reports. Otherwise she would stay a little longer to see Brexit through, possibly in the second half of July. 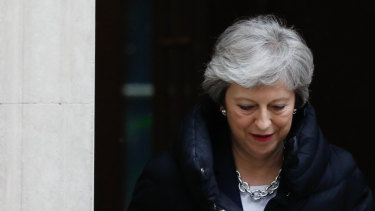 Prime Minister Theresa May has vowed to step down once her Brexit deal is passed.Credit:Bloomberg

The most recent survey, published at the end of March, found the Tory membership (which will vote on May’s successor) liked Johnson the best, followed by Brexit Secretary Dominic Raab and Environment Secretary Michael Gove.

May met the executives of the Conservatives’ 1922 committee, which represents all Tory MPs, on Thursday for what was described as a “tough” and “frank” exchange of views over her ailing leadership.

In this month’s local elections almost 1300 Conservative councillors lost their seats. The Conservatives are placing third in polls for next week’s European Parliament elections, behind Nigel Farage’s Brexit Party and Labour.

On general election intentions, Conservative support has plunged to its lowest level in 17 years, the latest Ipsos MORI survey found.

If an election were held tomorrow just 25 per cent of voters would pick the Conservatives, down from 38 per cent in March. Jeremy Corbyn’s Labour were on 27 per cent, the Brexit Party on 16 per cent and the Liberal Democrats on 15 per cent.

This is the lowest combined Tory and Labour score since the Ipsos polls began 40 years ago.

After the meeting, the 1922 Committee executive and May agreed on a statement saying she was “determined to secure our departure from the European Union” and would try to secure the passage of a Brexit bill through Parliament in the week beginning June 3.

The timing has been criticised, as US President Donald Trump arrives in the country for an official visit that week, and the Prime Minister is due to attend D-Day commemorations on the Wednesday in Portsmouth and the next day in France. 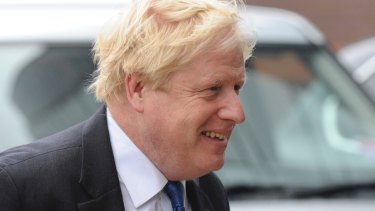 Former foreign secretary Boris Johnson is one of several politicians lining up to replace May.Credit:AP

“We have agreed that [May] and I will meet following the second reading of the Bill to agree [on] a timetable for the election of a new leader of the Conservative Party,” 1922 Committee chair Sir Graham Brady said.

Senior government sources told the BBC that if the bill does not pass its second reading May would resign soon after, with a leadership contest over the northern summer.

The Tory leadership is usually decided with a ballot of MPs selecting two candidates for a membership-wide postal vote. However there could also be a fast-tracked contest due to the looming Brexit deadline.

May could stay on until her successor is chosen, though there is a push for her to be replaced immediately by a “neutral” caretaker.

Whoever replaces May would be faced with the daunting task of finding a new approach to Brexit, with a looming deadline of October 31 when the UK is again at risk of a damaging no-deal exit.

If the bill did get a second reading, May would stay on to make sure all necessary Brexit legislation is passed and ratified by the EU, with an eye to Brexit happening before the parliamentary summer recess on July 20.

May’s former chief of staff Nick Timothy wrote in the Telegraph that it was “beyond time for the Prime Minister to accept that the game is up”.

“Her premiership has failed and her authority is shot,” he wrote. “She has lost control of her ministers, who are clamouring to replace her. She has lost her MPs, who feel betrayed and misled.”

In the same newspaper, Tory MP Owen Paterson wrote: “Unless she accepts defeat and resigns now, her enduring legacy will be to have destroyed the Conservative party”.

Paterson said the paralysis over Brexit was “the result of the barely believable intransigence of a Prime Minister consumed by the increasingly deluded aim of passing an agreement which MPs have thrice told her in emphatic terms is a bad deal”.

However other Conservatives warned that May’s departure would only add to the uncertainty over Brexit.

Jimmy Dean Recalls More Than 29,000 Pounds Of Sausage Due To Metal Contamination