The fishing village that is split in two by coronavirus rules: Residents are left baffled after most locals are free to socialise – while a handful on the other side of a FOOTBRIDGE are banned from mixing indoors

A picturesque fishing village has been split in two by the controversial Covid-19 rules.

On one side of the river dividing Staithes, residents must obey the Tier Two regulations that ban indoor social mixing between households.

But the bulk of the tiny community living on the other side of the footbridge are in the less strict Tier One – and are free to socialise with neighbours in local pubs and cafes. 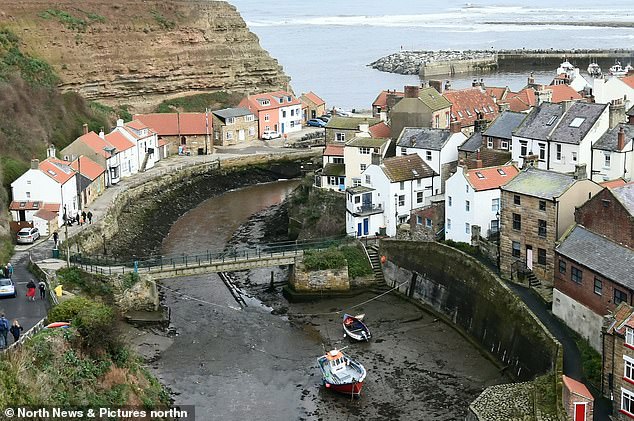 All at sea: Residents in Staithes have been left confused

The village where Captain Cook was a grocer’s apprentice in the 18th century is said to have a little over 100 full-time residents – tourists usually far outnumber them.

There are about 40 houses on the bank under the control of Redcar and Cleveland Council in the Teesside area and 100 on the larger Scarborough Council side – where all the cafes and shops are. Colin Harvey, 66, a retired chartered surveyor, and his wife Angela, 63, agreed the divide was ‘a bit of a joke’.

Mr Harvey, who lives on the Tier Two side, said: ‘A lot of people are totally confused especially since we all share the same TS13 postcode. But it all comes down to who empties your bins it seems.’

Lifeboatman and retired solicitor Colin Harris, 59, said: ‘The problem is if you create a stupid situation like this, people will just not respect the rules.’

Maureen Manship, 77, and husband William, 79, a retired postman, have lived in the village for 67 years and never known anything like it.

Their home overlooks the footbridge joining both sides and Mrs Manship said the lack of social distancing gives her ‘Covid rage.’ 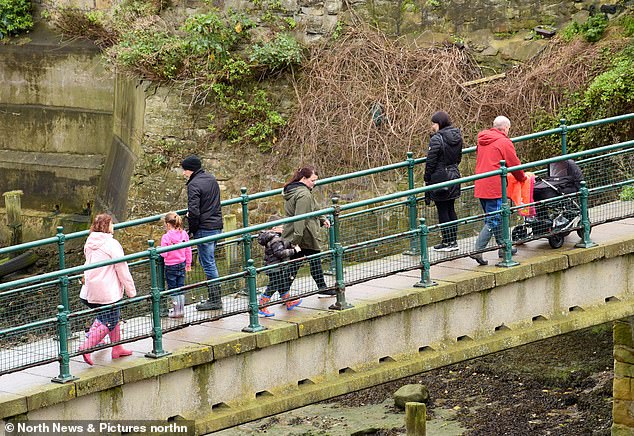 Dividing line: The footbridge across the river joins the two zones

She said: ‘Three quarters of people are careful when using the bridge but the other quarter are not and that’s what makes me mad.’

There has not been a village Bobby in Staithes for decades and short of posting a full-time guard on the bridge there would be no way of enforcing the rules if Redcar was to go into tier three and Scarborough remained at tier one.

Mr Harris said: ‘Any law is a bad law if it is not clear and cannot be enforced.

‘It has created a grey area in which people are not sure if they are breaking the rules and how can it be enforced if the police are confused.’ Martyn Cowell, 66, a volunteer at the Captain Cook and Staithes Museum, on the Scarborough side, said people felt both amused and fearful that part of the community was being classed as higher risk.

‘But on the whole I think people feel remarkably safe here,’ he said.

‘Tourism is booming with 100 per cent of the holiday cottages booked, which is more than normal.

‘So in a village where everyone knows each other this feels unreal.’

Yazidis recount the harrowing tales of being kept as ISIS slaves