As Victoria hits 90 per cent double vaxxed, the rebuild begins. The economy, the arts, the city and the suburbs, rural communities and tourism – green shoots are emerging and not a moment too soon.

Cautious elation is how I felt as I walked through the CBD twice midweek. I had not been anywhere near the city for so long, I was almost curious about what I may find. I had driven through the CBD six months ago [!] and it seemed there were tumbleweeds rolling uninterrupted down Swanston Street. Shuttered store fronts, barren pavements, leaves piled up in doorways – it was apocalyptic. 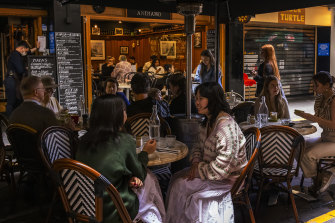 Diners enjoy the delights of Degraves St as Melbourne reopens completely to the fully vaccinated.Credit:Getty Images

This week I caught a bus into the city and noticed 100 per cent compliance with not just checking in on the QR code prominently displayed, but all the passengers were touching on with their Myki. I confess to never having seen that before. Has scanning QR codes become habit-forming and morphed into ending fare dodging as well?

My lunch visit was at a bustling restaurant full of excited patrons warmly greeting each other and toasting their endurance. Millennials in sharp business attire, the blokes all in the new uniform of tight blue suits with slim brown shoes, boisterously toasted the demise of Zoom and Teams, the end of the cramped home office and no more working from the broom cupboard.

Sharing bandwidth with tech-savvy teenagers or juggling clients with home-schooling kids has been a nightmare.

The euphoria of being back in the office was plain to see as was the relief readily expressed by the solicitous restaurant proprietor, and all the staff. Those confident predictions of but a few months ago, prophesizing the death of the high-rise office suddenly seem rash and exaggerated. 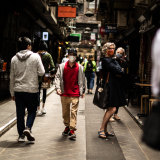 Melburnians out at lunch time, still wearing masks despite the easing of restrictions.Credit:Scott McNaughton

Next day, as face-to-face meetings resume, I had the typically indulgent Yum Cha in Little Bourke Street, as always ordered too many steaming bowls of dumplings and marvelled at the novelty of shops open for trade.

Dodging kids skateboarding outside the State Library while slowly walking from Chinatown to the University of Melbourne I could feel my tension release. We’re back!

For everyone rushing to re-enter a world thought to have been lost, there are those who have withdrawn, turtle like into their shells. Not just high school and uni students are experiencing heightened levels and incidences of anxiety – plenty of “grown-ups” are stressed and even depressed by the challenges of re-entry too.

They deserve and require help, and we can all play a role, not just the professional therapists. Friends, neighbours, relatives … we have helped each other through the lockdowns, now we can support each other for the revival.

The real action is on the streets, and the parliamentary theatrics are but a distraction. The Premier now has to negotiate with not just the crossbench holders of the balance of power, but also a shameless Adem Somyurek who is either extracting revenge on Dan Andrews or looking for some other concessions in his feud within the ALP.

His political wrangling can have zero influence on IBAC or any police investigation – but could influence who does what behind the scenes on any other outstanding issues arising from the “Somyurekage”. In a perverse way, his stance assists the Premier by forcing broader consultation, not a bad outcome.

Our Prime Minister’s initial comments condemning the violence embedded in the protests outside State Parliament, whilst simultaneously empathising with those same protesters, was fraught with risk. Saying that he understood their frustrations and governments should step back from governing is no less than giving comfort to saboteurs of our COVID-19 recovery.

His words have been greeted as supportive by the fringe. In their minds the PM validated their protest, at which the Premier was hanged in effigy on makeshift gallows.

The next day crossbench MP Andy Meddick – who had already been a target of threats – confirmed his daughter had been attacked in the street.

The PM then back-pedalled at full speed.

Why would the PM make those initial comments? It can only be because he does not want to alienate those potential voters, nor does he want to take the pressure off his enemies. He ought to be aware that sitting on the fence just means you get a sore bum.

Some media coverage seeks to describe Dan Andrews consultation and negotiation as a failure. As I tried to explain last Sunday, consultation does not come easily to this Premier.

Deborah Glass, Victoria’s Ombudsman wrote mid-week, that there are still some important modifications to the machinery of public health laws to be refined, but that is all – it is not demolition, just fine-tuning.

Meanwhile, the business of running Victoria resumes. Our hospitals and health care systems have massive back-logs of procedures and treatments that will take a very long time to resolve. Cancer screening, elective surgery, mental health programs, community health and many more will need support and money to catch up.

The legal system, put into deep freeze for nearly two years, has massive challenges in overcoming crippling delays. For instance, any new application filed in VCAT now will not be reached until November 2023. Other courts and tribunals are not immune, particularly criminal jury trials.

Along with the services that need re-investment, the social and cultural fabric is being re-imagined. Concerts, festivals, our renowned music scene, dining both fine and simple, the repair is underway.

Marvellous Melbourne will be marvellous again.