It is an incongruous scene. Other prisoners, mostly heavily muscled young men who have fallen in with bikie gangs, look up from their tables to acknowledge Goussis, a respected figure within the maximum-security jail.

The newbies wear green coveralls, experienced prisoners like Goussis wear blue. Razor wire lines the wall of a playground where a mural of Thomas the Tank Engine fades in the sun.

Ange Goussis is serving a minimum 35-year sentence for two murders; the close-range shootings of Lewis Caine and Lewis Moran. No survivor of Melbourne’s gangland war is facing a longer stint behind bars. Even Carl Williams, had he lived, would have gotten out before Goussis.

As Goussis cuts the cake with a plastic knife, he explains the prison bakes them on request. Gone is the temptation to smuggle in contraband between layers of sponge, jam and cream. Once the cake is served, Goussis’ piece sits untouched for the next hour as he recounts, publicly for the first time, his account of what happened the night Caine was killed.

The story begins on a Saturday night at a Carlton pub, a now closed watering hole near Melbourne University once frequented by a sozzled mix of students, lawyers, cops, crooks and knockabouts. Goussis is drinking pints of Guinness with Caine. The third man in the shout is a criminal associate of Goussis.

It is May 8, 2004, the height of Melbourne’s gangland war. Goussis, once a promising boxer, is making his living collecting debts. His constant companion is the older, more experienced criminal associate who, since the murder of Goussis’ previous benefactor Nikolai “The Russian” Radev, has become his gangland mentor. 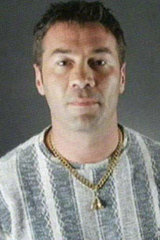 At the time of Louis Caine’s murder, Ange Goussis was the constant companion of an older crook who’d become his gangland mentor. Credit:Channel 9 News

Their close relationship had recently become strained. A week earlier, the older crook telephoned Goussis from outside his house. He was in a rage, threatening to kill his own wife. When Goussis opened the door, the crook stuck a gun in his stomach. Goussis calmed him down but feared what he might do next.

This Saturday night at the pub, the older crook works himself into a rage again. He is drinking heavily, as he invariably does. And he is furious with Caine, an extroverted, denim-clad criminal figure he derisively describes as a wannabe gangster with delusions of grandeur.

Caine’s claim to notoriety was kicking to death a man outside a nightclub, a gratuitous assault for which he served 10 years. Still on parole that night at the pub, he was in regular contact with Carl Williams. His friend Andrew “Benji” Veniamin was dead and criminal patriarch Lewis Moran had been gunned down inside the Brunswick Club six weeks earlier. Caine was convinced he would be next to die.

Caine was known among gangland associates for running out of money and “snipping” people for a loan. That night he borrowed $200 from Goussis and another $500 from Goussis’ companion to buy drinks. When Caine went to the bar, the older crook turned to Goussis and declared: “I’m going to whack that c—.” 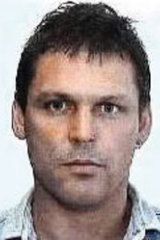 The body of gangland figure Lewis Caine was found dumped on a quiet Brunswick street 17 years ago.

Goussis knew it was no bluff. His mentor had spent his adult life in and out of jail and killed men on both sides of the walls. He was dangerous and usually armed. Tucked into the front of his pants that night was a .38 calibre snub-nosed revolver. But before Caine returned from the bar, an abrupt change came over the older crook. “That stuff before, forget about it,” he said to Goussis.

Goussis believed the storm had passed.

The three men had been drinking for several hours when the older crook suggested they get something to eat. Phone records obtained by police show that just after 10pm, he called a Greek restaurant in Nicholson Street, Fitzroy, and booked a table for three. Hotel security footage captured Goussis and his companion farewelling bar staff at 10.36pm.

Just after 11pm a passerby found Caine’s body, still warm, dumped in a Brunswick street. He was face down, his denim jacket scrunched up around his shoulders. He still had $435 in his pocket. Crime scene photos show blood flowing from a head wound into the bluestone gutter. An abandoned shopping trolley sits upturned on the footpath.

Within 11 days, Goussis and his companion were arrested.

Twice Goussis was interviewed by police. First he claimed that Caine had planned to buy his girlfriend’s car and had driven it home from the pub that night. Two days later, having workshopped a new story with his companion while they were housed together on remand, he admitted shooting Caine and claimed it was self-defence. He claimed the older crook wasn’t in the car when the shooting happened. Police believed hardly a word of either account.

Investigating police suspected the other man was the killer and urged Goussis’ lawyers to convince their client to tell the truth. His lawyers knew he was taking the rap for a shooting he didn’t do but he refused to implicate his mentor. With Goussis determined to cover for older crook, police were left with little choice. After a two-week trial, both men were found guilty of murder.

‘It is time to fight back’

In Port Phillip Prison, Goussis shifts on the metal-and-plastic seat bolted to the floor. He says he doesn’t regret lying to police. In his world of warped allegiances and misguided notions of honour, there is nothing worse than being a dog: snitching to police.

What he didn’t realise at the time was his companion, a man he considered family, had no such qualms. Although the older crook, in a recorded telephone conversation, told his partner he would rather cut his own throat than help the police, he also told her: “It looks like I could be doing a deal with the Jacks, love.”

“I’ve taken the rap for this scumbag,” Goussis says quietly. “Now he has lumbered me with all this other stuff. It is time to fight back.”

When Goussis told his story to this reporter, it was his 47th birthday; the 10th he had spent inside. He is now 53. His hair is lighter than it was and the lines on his face more worn. His circumstances have improved marginally – he has shifted from Port Phillip to Barwon prison and more recently, to a medium-security facility in Lara – but fundamentally they are unchanged. 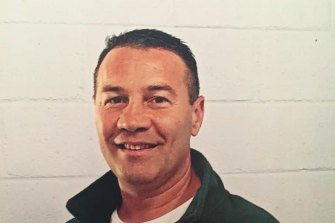 Goussis admits he is no angel but swears he is not a killer. A change to Victoria’s criminal law by the Andrews government two years ago means he may have a new opportunity to prove it.

Where anyone convicted of a crime was previously limited to one appeal to the Victorian courts, the law change allows prisoners to lodge second or subsequent appeals if they can establish there is “fresh and compelling evidence” raising doubt about their guilt.

This provision, known colloquially as “Orman’s Law”, was introduced after Faruk Orman, a wrongfully convicted former client of defence barrister-turned-police informant Nicola Gobbo, lodged a petition of mercy with the Victorian attorney-general to have his case reviewed. The government accepted that access to justice, whether for Orman or Goussis, shouldn’t depend on the vagaries of politics.

Appeal documents seen by The Age and Sydney Morning Herald cite evidence unavailable to Goussis’ legal team at the time of his trial and first, unsuccessful appeal, and evidence concealed from his lawyers by Victoria Police. Some of the information comes from recorded conversations between police and his mentor.

So what does Goussis say really happened the night Caine was killed?

The three men left the pub in a black Ford Explorer 4WD the older crook liked to call their “Sopranos” car. Goussis was driving, his companion in the passenger seat. Caine sat in the middle of the back seat, drunk and relaxed.

As they were driving up Nicholson Street towards the restaurant, the older crook abruptly suggested they go to another Greek place in Brunswick, near the Lyndhurst Club Hotel. As soon as Goussis turned into a parking lot near the bottle shop of the pub, he saw the older crook reach for the revolver in his pants. He knew what was coming next and felt powerless to stop it.

Sitting in jail, Goussis recalls the shooting as if in slow motion. The gun the older crook carried had been crudely modified for gangland purposes. He had shorn off the top of the firing hammer with a file – an old underworld trick so that, when he drew in a hurry, the hammer wouldn’t get caught on his clothes. As Goussis eased the Ford into a parking bay, he saw his companion reach down and cock the hammer. Then, with Caine oblivious to his fate, he swung his arm around until the barrel was just inches away from his victim’s face.

The single, fatal shot entered Caine’s skull just below the right eye. He slumped forward onto the back of the seats, blood spurting from his face. The next thing Goussis felt was the gun jammed into his ribs. “Just drive,” the older crook said.

For a few frantic minutes they drove through the backstreets of Brunswick in Melbourne’s inner north until they reached the dead end of Katawa Grove. The older crook wrestled Caine out of the back seat and dumped him on the quiet street.

From there, the night got crazier still.

The pair decided to drive home but on the way were forced to slow at a random breath test outside Melbourne Zoo before a young constable waved them through. Passing through the suburb of Newmarket, west of the city, the older crook declared: “Let’s have a drink.”

‘It is common knowledge’

That Goussis didn’t kill Caine is one of the worst-kept secrets in the Victorian justice system. “It is common knowledge that he didn’t do it,” says Caine’s girlfriend at the time, criminal lawyer Zarah Garde-Wilson.

Gangland war survivor Mick Gatto was inside Port Phillip Prison awaiting trial for Veniamin’s shooting at the same time that Goussis and the older crook were waiting to be tried for Caine’s murder. Gatto convinced a jury that he shot Veniamin in self-defence but couldn’t convince the older crook to do the right thing by Goussis.

“I said ‘why don’t you put up your hand and clear the kid, he has never done it’,” Gatto recalls. “He said ‘I can’t do that’. He didn’t elaborate about it but I knew it was [the older crook]. He just led Ange up the garden path.” 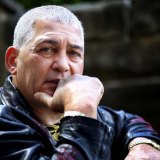 Mick Gatto couldn’t convince the older crook to “do the right thing” by Goussis and admit he was the shooter.Credit:Anthony Johnson

The older crook is still in jail. His reputation, inside and outside the prison system, is well known; killer, liar, manipulator.

In a lengthy jailhouse letter, Goussis laments that, although he is not the first, he was taken for a fool by his one-time friend and mentor. “It wasn’t hard for him to manipulate me into agreeing to change my story to suit him,” he says.

Goussis had his opportunity to come clean about his involvement in Caine’s murder a long time ago. Shortly after his arrest, police offered him preferential treatment if he agreed to give evidence against the older crook. Goussis thought he had a better offer: a promise from the older crook that if the pair were convicted for Caine’s killing, he would tell the truth to police and exonerate Goussis.