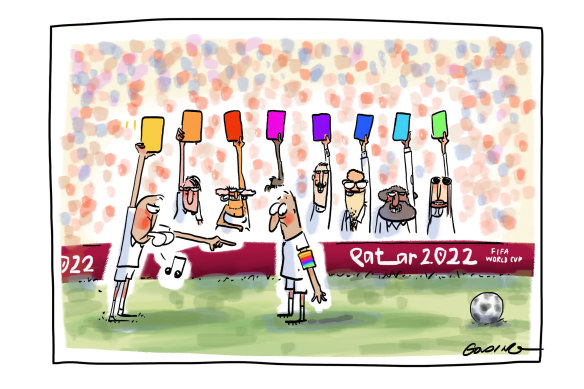 So the lord mayor thinks COVID-19 has been good for Melbourne (The Age, 25/11). Seriously? How about you ask the families of the almost 6000 Victorians who died from it for their thoughts, Sally Capp? You may get a different response.
Anthony Clifford, Wendouree

The impact on business

Sally Capp still collected her substantial mayoral allowance while many small businesses were going to the wall. She appears to have no pity for all those Victorians who suffered through our numerous lockdowns. These small businesses were the lifeblood of the CBD but many will not survive.
Peter Harney, Delacombe

I hope your readers are too principled to take Nicole Pedersen-Mackinnon’s advice to “milk” their health cover (Sunday Age, 20/11).

When John Howard introduced the private health insurance rebate, we were assured that using government money to prop up the private health system would “take the pressure off the public system”. Perhaps another article can explain exactly how the massages, getting new glasses that you don’t need, and swimming lessons (all of which Pedersen-MacKinnon recommends) will help our hard-pressed public hospitals.
Jill Baird, North Melbourne

Do some of the world’s best soccer players have to be members of Actors Equity to qualify to play the game? (Especially around the penalty box). Fair dinkum.
Keith Robinson, Glen Waverley

Man of many ministries

When Tony Abbott voiced his concerns that it could change the way government works because it will have “an unspecified say, over unspecified topics, with unspecified ramifications” (The Age, 26/11), was he referring to the Indigenous Voice or Scott Morrison’s secretive stealth of five ministries?
Pat Anderson, Airport West

From a multi-minister prime minister to sing-alongs at the governor-general’s official residences (The Age, 26/11), one is reminded of John O’Grady’s (under the pseudonym “Nino Culotta”) assessment of Aussies in his 1957 novel, They’re a Weird Mob.
Rick Whitelaw, Anglesea

The solution is clear

Re the High Court battle over taxing electric vehicles which will pit the federal government against the states in a constitutional fight (Sunday Age, 20/11). I wonder how much the plethora of barristers representing the states and commonwealth will cost taxpayers. Everyone involved knows that, ultimately, it has to be a national scheme, operated by the commonwealth. Why waste money on arguing about it?
Anne Warner, Melbourne

The too high cost of EVs

The deal to give tax breaks for electric vehicles (The Age, 23/11) is meaningless to most people who cannot afford to buy them. The tax breaks benefit the rich and corporates. Most people don’t pay the fringe benefits tax, so I don’t understand why the federal government, the Greens and independent senator David Pocock think it is such a big win. If you want people to buy these cars, they have to be cheaper.
Pier Paolo De Carlo, Ascot Vale

Rebellion of the workers

Re the shortage of vets in regional areas (The Age, 26/11). Apparently the answer to the problems of poor wages, unattractive hours and not enough childcare is…recruit poor sucker men who will put up with these sub-optimal conditions.

No evidence is presented that the recruitment problem is due to too many women vets – just that rural and regional Australia “has tended to employ more men”. Perhaps the issue is that workers in general are no longer willing to accept unpleasant conditions that impact their work-life balance.
Molly Williams, Warrandyte

Pain will never leave us

To more senior people, Black Friday means a day in 1939 when Victoria was on fire. Obviously not many of us are left who can remember that terrible day with a 40 degree temperature and a very strong north wind – fire carts with sirens blaring and police cars zooming around. My father was the local GP and my mother was in the Red Cross, and I remember them being out all day and half the night tending to injured volunteers, firemen and policemen. So please, Victorian Retailers Association, change the name to any colour but black for our sakes.
David Sutherland, Hawthorn

It’s no good bemoaning the collapse of our underfunded recycling systems if you are lured by bonanzas like Black Friday. We need large-scale, centrally organised recycling programs, but also people need to buy less. Recreational shopping is a malady encouraged by the fashion and other industries. I buy, therefore I am. Attitudinal change is essential.
Christine Cemm, Mornington

Michael Bachelard sends an exclusive newsletter to subscribers each week. Sign up to receive his Note from the Editor.