Examine, a free weekly newsletter covering science with a sceptical, evidence-based eye, is sent every Tuesday. Below is an excerpt – sign up to get the whole newsletter in your inbox.

Since the emergence of COVID-19, a question has obsessed many: where did it come from?

That question – and the fact the virus was first detected in the city of Wuhan, home of the Wuhan Institute of Virology – has sparked geopolitical convulsions and a fracturing of faith in science, not to mention a thousand anonymous Twitter-sleuth accounts. 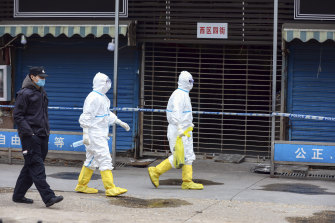 In January 2020, workers in protective gear carry a bag containing a giant salamander that was reported to have escaped from the Huanan Seafood Market in Wuhan.Credit:ChinaTopix

People love a conspiracy theory, especially one playing out in real time on social media.

Meanwhile, a group of scientists has been working on their own parallel investigative effort. With a pair of articles published in Science last week (you can read them here and here), they say they are at the end of their search.

The virus almost-certainly jumped from wildlife into humans in the Huanan Seafood Wholesale Market in Wuhan, the papers argue. The authors have even found the most likely section of the market. They have old photos of caged raccoon dogs – known carriers of COVID-19 – being sold there.

“The siren has definitely sounded on the lab leak theory,” says Professor Edward Holmes, a world-leading viral evolution expert based at the University of Sydney and co-author on both the papers. “In terms of what we can reasonably do, with the available science and the science we’ll get in the foreseeable future, I think we’re at the end of the road frankly. There’s not a lot more to mine.”

Professor Dominic Dwyer, director of public health pathology in NSW and a member of the World Health Organisation (WHO) team that travelled to Wuhan last year to investigate the origins of the virus, agrees.

“That’s what we thought originally back when we did the first report. This is yet another brick added to the wall of information around zoonotic infection.”

When COVID-19 first emerged in Wuhan, two distinct viral lineages were spotted, separated by two small changes in genetic code. They were detected a week apart in late December 2019.

The team behind the Science papers used computers to simulate the most likely sequence of events that would produce two viruses circulating at the same time.

They found it is exceedingly unlikely that a single virus would jump into humans and quickly split into two distinct variants.

Far more likely, was that the virus had been circulating in animals for long enough to split into multiple variants, two of which then jumped separately into humans. Multi-virus jumps have been seen when COVID-19 jumped from minks on Dutch farms to humans, and when SARS and MERS also jumped into humans.

If the COVID-19 virus originated in a lab, as some conspiracy theories suggest, you’d expect a single introduction into humans – rather than two distinct viral lineages. And both strains were found in samples taken from Huanan market. “That, I think, is pretty good evidence,” says Dwyer.

Our story now moves to the Huanan Seafood Wholesale Market; two-thirds of early hospitalised cases had a link to the market.

Lab-leak advocates argue that Huanan is a perfect super-spreader site. Maybe a scientist from the Wuhan Institute of Virology shopped there and spread the bug?

The Science papers show that 155 COVID cases in December 2019 were strongly clustered in the suburbs around the market – including cases with no known link to the market.

If the virus emerged from the Wuhan Institute of Virology, wouldn’t early cases cluster around there? Wouldn’t an infected scientist have passed on the virus while walking to work? “You wouldn’t expect to find the virus around a not-very-well-visited animal market in a different part of the city,” says Holmes.

And the papers show Huanan is hardly the perfect superspreader site that some suggest.

It turns out the market is a small and relatively obscure shopping spot. By reviewing social media check-in data, the team deduced that 70 other markets in Wuhan had more visitors than Huanan. Of 430 identified possible super-spreader sites in Wuhan, such as shopping malls, supermarkets and schools, the Huanan market was among the least visited.

“It’s like going to Coles in Bendigo on a wet Wednesday afternoon. It’s not a thriving mass of humanity,” says Holmes.

“What are the odds that two lineages escape from the lab and both make their way into the market and both cause superspreader events? It’s ridiculous. There is no way that can happen,” says Holmes.

Using Chinese and WHO data along with public online maps, business registries, photos and official reports, the scientists reconstructed a map of the Huanan market.

This map shows the west side of the market. Each black dot represents a human case. Triangles mark stalls selling live animals or unknown meat.

Coloured boxes mark the number of times Chinese investigators detected COVID-19 on environmental samples in late 2019 (by the time they arrived, the market had been shut down and disinfected, and there were no live animals left to test).

On the far left, marked by the dotted line, is the market’s wildlife section. The Chinese found COVID-19 all over it. Eight of the earliest human cases linked to the market worked nearby.

The red box marks a stall where COVID-19 was found on a metal cage, a machine for removing hair and feathers from animals, two carts used for moving cages, a nearby water drain and on the ground.

Ironically, Holmes had visited that same stall on a trip to Wuhan in 2014 – and snapped a photo of caged raccoon dogs stacked on top of caged birds. “We can’t prove it is this exact stall but the data is very suggestive,” he says. 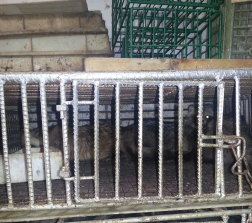 We know now that COVID-19 moves easily among many species of animals, including raccoon dogs – but also badgers, hares, rats and foxes, all observed being sold live at the market in 2019.

Raccoon dogs were supplied to the market by a network of farms in western Hubei province, the Science papers note. Western Hubei is known for its extensive network of caves filled with Rhinolophus bats, which carry coronaviruses similar to the one that causes COVID-19.

“Raccoon dogs are a suspect,” says Holmes, but not the only one. “I think, strongly, there are a whole bunch of animals out there who have viruses like this that we have not sampled yet.”

Theory one: Two closely related versions of a virus emerge at the same time in people who live near or work in a small market selling wildlife. The market sells animals known to both carry the virus and to be farmed near bats that carry similar viruses. We detect those viruses on cages in the market’s wildlife section.

We know from past experience viruses can jump from animals to humans at wildlife markets. And we don’t have any evidence of the virus spreading anywhere else in Wuhan before it was in the market.

Compare this to the lab-leak theory. No one has ever been able to prove COVID-19 – let alone a twin strain – was ever at the Wuhan Institute of Virology. There’s no epidemiological evidence that the virus was spreading near the institute.

“There’s no emails. There’s no evidence in any of the science. There’s absolutely nothing,” says Holmes.

Lab-leak proponents have now turned to trying to find malfeasance in the articles’ peer review process, of all places. Holmes doubts the conspiracy theorists will ever be convinced. “Even if the Chinese do let us in the lab, people would say ‘aha, but they’re covering it up’,” he says.

The Examine newsletter explains and analyses science with a rigorous focus on the evidence. Sign up to get it each week.

Kindergarten teacher 'molested girl, 5, under his desk after giving her a bottle of bubbles to play with'