Home » World News » Theresa May, the super-yacht and the Garbage King

As Prime Minister of Great Britain, Theresa May often came across as joyless and wooden.

As a backbencher, May is finally having a little fun. Before the no doubt delicious schadenfreude of watching her successor Boris Johnson’s political demise, there’s the matter of May’s trip to Australia in February this year. 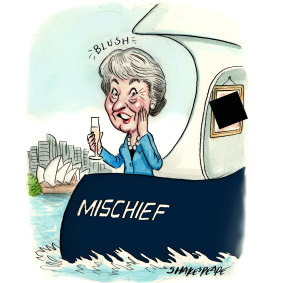 During her nine-day jaunt down under, May was hosted by garbage millionaire Ian Malouf on his plush 52-metre yacht Mischief for a cruise around Sydney Harbour, estimated value £30,600 ($55,000). We wonder how May, who once told a TV interviewer the naughtiest thing she’d ever done was run through fields of wheat as a child, coped with Mischief’s famously risque artwork.

Her date with Australia’s richest garbo turned yacht broker wasn’t the only bit of generosity May received. Her flights and accommodation were paid for by the Victorian division of the Liberal Party at a cost of £38,700, according to disclosures to her register of interests.

The Liberals hoped May’s visit would help rally more women to the cause. Given the party’s evisceration at the last election, and likely defeat at next month’s Victorian poll, well … perhaps someone who nearly lost to Jeremy Corbyn isn’t the greatest electoral asset.

ABC’S BATTLE OF THE AGES

Culture reporter Thomas Mitchell made the case for fresh faces at the national broadcaster, which triggered a tit-for-tat between writers in these pages and ABC management.

But, the debate has now broadened beyond Kelly to discrepancies in pay and opportunities for Aunty’s younger employees — criticism which chair of the ABC board Ita Buttrose dismissed as simply ignorant and “ageist”. 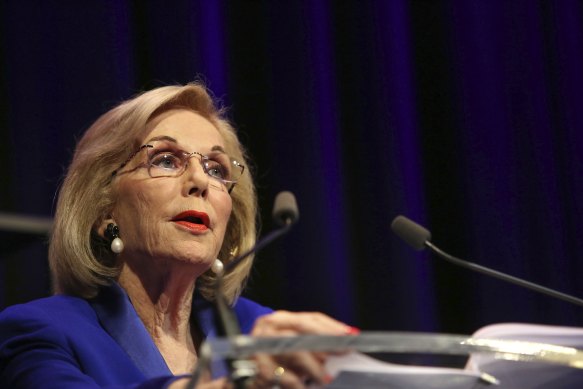 But the reality is many young staff are trapped in short-term contracts while veteran reporters are treated like protected species. ABC staffers are now breaking ranks – publicly backing culture news editor Osman Faruqi’s latest op-ed on the topic.

Behind the scenes, ABC staff are mobilising too, with group chats lighting up after Buttrose denied the ABC had a youth problem.

“It’s cathartic to read this!” wrote one current ABC employee of Faruqi’s work. “Maddening to hear Ita’s comments. I’ve been on short-term contracts (nothing over 12 months) for ten years.”

Faruqi says he received around 30 messages from current staff to discuss what is a constant point of discussion within the organisation.

Rather than engaging – Buttrose doubled down, speaking to News Corp’s media column to query Karl Stefanovic’s use-by date and issue a thinly veiled insult in Faruqi’s direction. The lady doth protest too much, methinks.

Snake Man was back in court last week to receive judgment in his defamation case against a string of publications and journalists, including Nine’s Peter Hitchener, Tom Kelly and ABC’s Paul Barry.

The legal battle involves coverage of an incident where a tiger snake was supposedly found hitching a ride underneath a car at a service station at Coles Nunawading. Snake Man later conceded he mocked up photos of the deadly snake for the shoot – but was incensed at how this was reported.

Hoser filed an exhaustive list of defamatory imputations including that he had spread fake news, is a liar and a fraud for planting snakes and that he endangered lives by releasing snakes in public when he says the “re-enactment” was necessary to conduct the segment safely.

County court judge Julie Clayton dismissed a long list of Hoser’s imputations, which extend to reader comments labelling him a “wanka” and “peanut”. But the battle will live on, as Snake Man has been given an opportunity to re-plead others, including that he’s a faker and a fraud. The self-representing Snake Man will now have to weigh up whether to come back for another bite.

In any election tearing down corflutes is par for the course.

But outside the Bulgarian Orthodox Church on Northcote’s High Street, it’s been taken to the next level.

Church treasurer Martin Manev doesn’t know who tore down the sign, but it’s certainly not the first political attack on the building. Recently, an English flag was burnt and replaced with a “No To Monarchy” sign, following months of graffiti.

This time around, it seems the quinoa curtain is back with a vengeance.

The Property Council of Australia’s chief executive Ken Morrison abruptly announced his departure from the lobby group on Monday, citing the need to pursue fresh challenges.

He’ll finish up in December after eight years at the top, and 25 years of involvement. While CBD wondered whether he’d be tempted to follow that other Morrison from the property council into politics (a few Liberal seats have opened up in NSW after all), something in the business world seems more likely.

Morrison told his LinkedIn followers there were no immediate plans, beyond a family holiday, and a management course at global business school.