Home » World News » ‘They can only suffer so much’: Explosion leaves Beirut teetering on the brink

Samah Hadid was standing at the window of her Beirut home when the building started shaking and a pink mushroom cloud formed before her eyes. The Australian dived into a corner seconds before the ceiling collapsed – a moment of instinct which may have saved her life.

"The explosion ripped through the apartment, destroying pretty much everything," Hadid says. "It took me a few minutes to recover, to realise what had happened and to see the destruction before me.

"I ran out of the building to seek safety. As I was doing so, many of my neighbours were injured. The staircase was just full of blood." 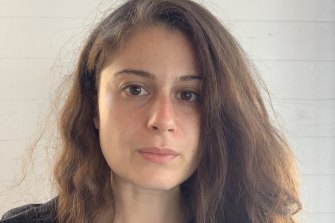 Samah Hadid in Beirut after she survived the blast.

The 32-year-old aid worker grew up in the south-western Sydney suburb of Bankstown and had been living in Beirut for about five years before a devastating explosion in a warehouse packed with ammonium nitrate claimed at least 157 lives and injured 5000.

Tuesday's blast also unleashed a new wave of suffering in a nation already teetering on the brink from its worst crisis since the 1975-1990 civil war. A badly mismanaged economy has been in freefall since October, the government is riddled with corruption, and more than 1.5 million refugees – about one quarter of Lebanon's usual population – have poured in following the war in neighbouring Syria.

COVID-19 has also started to hit hard. A lockdown was imposed without any of the financial assistance offered by other governments to cushion the blow. Case numbers were surging and hospitals filling with virus patients before the blast overwhelmed them. One major hospital was so badly damaged it couldn't even accept the masses who had gathered at its doors for help.

The bustling street where Hadid lived was within a kilometre of the waterfront warehouse which for six years contained 2750 tonnes of highly dangerous ammonium nitrate seized from a Russian-owned cargo ship in 2014.

It's not clear what caused the stockpile to detonate just after 6pm on Tuesday. 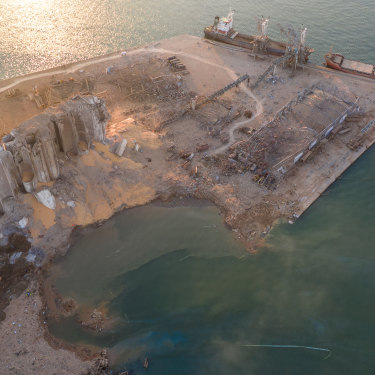 The explosion decimated the port and sent a powerful shockwave across the city. Credit:Getty Images

"Coming out of my building, the scenes were absolutely horrifying," Hadid recalls. "Glass filled the streets. We saw buildings just reduced to rubble and people injured and not being able to go to the hospitals nearby because they were overcrowded.

"The Lebanese people have gone through a lot. They've seen wars, they've seen terrorism, they've seen disasters and now they are facing this. They can only suffer so much.

"It is often said that the Lebanese are resilient, but no people should have to bear this much suffering."

The problems facing the economy are immense. Lebanon was unable to meet a $1.2 billion Eurobond debt repayment in March and talks to secure a $10billion loan from the International Monetary Fund have stalled. The value of the lira has collapsed by 80 per cent in less than a year. The country's debt-to-GDP ratio is the third-highest in the world at nearly 170 per cent. Household savings have evaporated. Inflation is skyrocketing. And more than a third of the overall workforce is unemployed.

Mains electricity is frequently unavailable for hours each day. One in every three Lebanese citizens now lives in poverty. The World Bank warned in November – before the pandemic and Tuesday's deadly blast – that that figure could rise to 50 per cent if the economic situation worsens.

These grim numbers will be compounded by the destruction of Beirut's port in Tuesday's blast. Lebanon imports about 80 per cent of everything it consumes. The decimated port handled about 60 per cent of those imports and the shattered grain silos held 85 per cent of the country's cereals.

Rami Shamma, the field operations director for World Vision in Lebanon, says he feels sick about what now faces the country and whether its government and the international community will mount a proper response.

"No matter how much we hear or see on the news, no matter how much we try to talk about the situation in the country, what people here are going through right now is hard to comprehend," Shamma says. "You would not be able to understand it if you have not lived it. 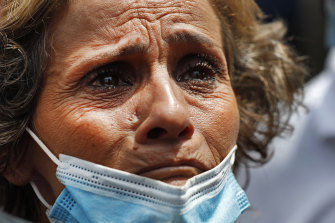 A woman in tears waits outside the port for news about her missing son.Credit:AP

Australia's Lebanese Muslim Association has been collecting money and donations of medical supplies to send to Beirut. This follows its fundraising effort since April for food parcels to help with the fallout from the economic crisis.

The Australian government has also directed $2 million from its existing aid budget towards the recovery, but is wary of giving aid to the Lebanese administration directly over fears it will be ransacked by corrupt officials or fall into the hands of Hezbollah. The $2 million will instead be split evenly between the World Food Program and the Red Cross.

"Now the port has been destroyed, there is a fear that hunger will rise," says Hadid, who is also a human rights campaigner. "Lebanon needs international support and aid assistance. This country cannot cope with this disaster and the multiple crises it is facing." 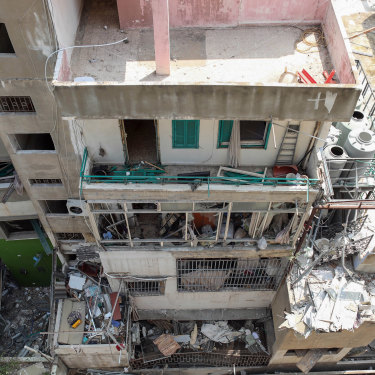 One of hundreds of damaged residential blocks in the city.Credit:Bloomberg

Officials are now openly blaming each other. The head of Lebanon’s Customs Department, Badri Daher, told the AP news agency that one of the main security agencies, State Security, had been investigating the ammonium nitrate stockpile this year. Daher says State Security sent several reports to the cabinet about the risk of the material being stored in the warehouse.

As shock on the streets of Beirut gives way to anger, people want to know why the stockpile was there and whether the valuable material was the subject of any corrupt activity. One of the top-trending hashtags on Lebanese social media this week has been "hang up the nooses". 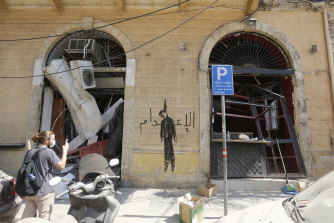 Graffiti reading 'The Hanging' is seen on a damaged building in downtown Beirut.Credit:Getty Images

"The link between this explosion and corruption is as clear as sunshine," says Beirut-born Karim Chaya, who has extended family in Sydney and Melbourne.

"We will never know what really happened because everything is covered up. Everyone scratches everybody else's back. All of them incompetent and waiting to make a quick buck."

Chaya says the people of Beirut are now focused on survival.

"When you have lived through so many wars, another blast is just another blast. We thought 'what else is new?'. But the magnitude of this was a game-changer."