Home » World News » ‘This is nonsense’: Collins on the attack in first NZ leaders’ debate

Wellington: National leader Judith Collins was on the offence in the first debate of the New Zealand election, calling Labour leader and Prime Minister Jacinda Ardern’s answers “nonsense” and arguing with host John Campbell about the need for her tax cut plan.

But the opposition is on the defence in the campaign, as it remained 17 points behind Labour in a TVNZ/Colmar Brunton poll released just before the debate.

It is also fighting to salvage its economic credibility after a second multibillion-dollar gap was revealed in its fiscal plan. 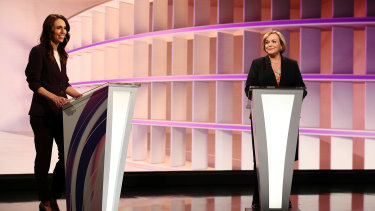 The error has come about after National appeared to count $NZ3.9 billion left over from the New Zealand Upgrade transport and infrastructure package twice.

No new policy positions were revealed by either leader, and no major slip-ups were made.

It was preceded by the first TV poll since the Auckland coronavirus cluster. The poll still had Labour in a position to govern alone, although down 5 points from the previous survey.

Labour’s support was at 48 per cent, the National’s at 31 per cent, ACT’s at 7 per cent, and the Green Party at 6 per cent. No other party breached the 5 per cent threshold.

Collins told Campbell her party could make up the difference before election day, saying campaigning had been stymied by the Auckland lockdown and pointing out that 14 per cent of the voters in the poll were undecided.

“We’ve got a fight on,” Collins said. 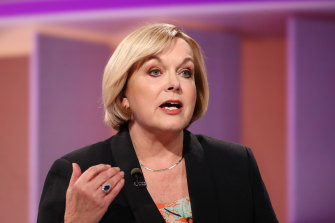 Collins was pushed by Campbell on her tax cut plan. He argued stimulatory spending should go to lower income earners, not the rich who benefit more from tax cuts.

Collins said people on the average wage deserved some more cash in the pocket – in particular teachers – and she believed higher earners would be spending the cash, not saving it.

Ardern mostly stayed away from attacking National directly throughout the night, but did criticise the party on hospital infrastructure. 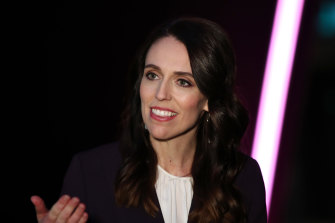 Ahead in the polls: NZ Prime Minister Jacinda Ardern.Credit:Getty Images

She said her government had to spend more than expected fixing up hospitals left neglected by National and that the government had spent more on health infrastructure in its last budget – $NZ900 million – than the entire operating allowance National had given itself in the next budget.

Collins said the attack on the past government “wasn’t fair” and pointed to hospital wings built under National.

Both party leaders were asked about the capital gains tax, which neither party currently supports. They both discussed a need to get people into jobs, with Ardern focusing more on higher wages and Collins on the need to train children for technology jobs.

On agriculture, Ardern was on the defence as a farmer asked the leaders about changing regulations hitting the mental health of those in the rural sector. Ardern said consensus between the government and the sector would be key. Collins said National would “look after” farmers and “not bag you” – saying Labour’s water quality reforms went too far.

Collins gained in energy as the debate went on, eventually interrupting Ardern to say “this is nonsense” while the Labour leader talked through her policies aimed at fighting child poverty.

She also said Ardern should stop giving her “nonsense” on housing, saying the Government had gone too far with its rental policies and was discouraging landlords.

Despite all this, Ardern told reporters following the debate politics “wasn’t blood sport” and the debate was about competing visions for the country.

Collins laughed at this assessment, saying she enjoyed the debate and wanted to do it again.

Woman, 46, wakes up in a body bag at Paraguay funeral home after doctors believed she was dead – The Sun

The Eagles played for a tie, but it was a losing decision

Daughter, 18, in Britain's biggest family opens up about her pregnancy