Warsaw: A contentious near-total ban on abortion in Poland has come into effect, despite rampant opposition from hundreds of thousands of Poles who began protesting last year in the largest demonstrations in the country since the 1989 collapse of communism.

Thousands of outraged women, teenagers and allies returned to the streets on Wednesday night, Warsaw time, bundled up against the cold after word that a ruling that halts the termination of abortions for fetal abnormalities — virtually the only kind of abortion performed in Poland — would come into force. 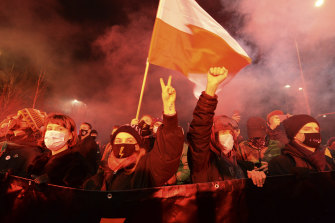 The decision had been made in October by the Constitutional Tribunal, but its implementation was delayed after it prompted a month of protests. On Wednesday, the government abruptly announced the ruling was being published in the government’s journal, meaning it would come into effect.

The protesters chanted slogans like “I think, I feel, I decide!” and “Freedom of choice instead of terror!” In Warsaw, they marched to the headquarters of the governing Law and Justice Party to songs including “I Will Survive”.

“We are dealing with incompetence, corruption, a total decay of the state, so these men are doing what they know best — taking away rights and freedoms from the citizens,” Marta Lempart, a protest organiser, told television station TVN24. “This is about women but also about all other minorities and majorities that Law and Justice hates.” 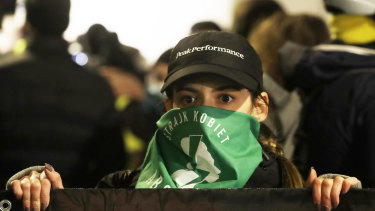 Opposition MPs criticised the decision to suddenly announce that the ruling would be published in the Official Journal. The government had previously delayed publication in an apparent answer to the protests, a move that legal experts have called unconstitutional.

“It’s not only women whom you’re bringing to the streets, it’s the whole nation that has had enough,” said Rafał Trzaskowski, the mayor of Warsaw, adding the decision to publish the ruling “against the will of Poles” was a “conscious and calculated acting to the detriment of the state”.

Others did not mince words in their discontent. “Bastards. #pseudo-ruling #pseudo-tribunal,” Barbara Nowacka, a centre-left opposition MP, said on Twitter.

The decision by thousands to protest, despite a surge in coronavirus cases, was another sign of discontent from a wide array of groups that believe human freedoms are being eroded under the Law and Justice Party, which is growing increasingly autocratic. It also comes as public anger is rising over the government’s handling of the pandemic — extending restrictions to the end of January — and a sluggish vaccination rollout.

Poland already had one of Europe’s most restrictive abortion laws, with the procedure legal in only three instances: fetal abnormalities, pregnancies resulting from rape or incest, and threats to a woman’s life. The latter two remain legal. But with 1074 of 1100 abortions performed in the country last year because of fetal abnormalities, the ban would outlaw abortion in most cases, and critics say many women will resort to illegal procedures or travel abroad to obtain abortions.

Even without the ruling in force, some hospitals had preemptively instructed doctors to stop performing abortions for fetal abnormalities, fearing the legal ramifications for their doctors, according to local media.

European legislators, who have accused the government of influencing the court’s decision, also criticised the announcement.

“Many of us cannot be in the streets with you to march in defence of our fundamental rights,” Terry Reintke, a Green member of the European Parliament from Germany, said on Twitter. “But know this: In every village, in every city in Europe there are women following your struggle. Never forget you are standing on the shoulders of brave and courageous women who have fought this fight for many years.”

“For them it is not about protecting life,” said Donald Tusk, an opposition Polish legislator and former president of the European Council, of the Law and Justice Party. “Under their rule more and more Poles are dying, and less are being born.”