School’s out! Thousands of bunker fish swirl in hypnotizing patterns off Long Island

Thousands of silvery fish swirled around in hypnotic patterns in stunning aerial footage shot over the coast of Long Island, New York.

The school of menhaden, also known as bunker fish, threaded around one another in a mesmerizing patchwork of charcoal gray and silver and the sun reflected off their scales.

Occasionally they could be seen splashing around as they jumped through the crystal clear water.

Menhaden tend to migrate to southern warmer waters in the Atlantic during the fall and winter in North America, and return up north for the spring and summer.

The group flat-bodied fish was captured in stunning drone footage by Joanna L Steidle on October 5.

The video was posted to her YouTube channel, and has over 5.3 thousand views.

In the stunning clip, the schools of fish weave around each other in rippling patterns and sulkily circle around one another.

Steidle has also captured stunning views of fall fog and other sites in the Hamptons through drone footage.

‘The most important fish in the sea’

Menhaden (Brevoortia patronus) play a vital role in the marine ecosystem across the Atlantic.

Some conservationists call them ‘the most important fish in the sea’ in reference to a book of the same name by H. Bruce Franklin, according to Ecori News.

Many believe the species should receive special protection because so many species feed on them, including bluefish, dolphins, eagles, humpback whales, osprey, sharks, striped bass and weakfish.

Menhaden are often removed in bulk by trawlers and their nutrient-rich flesh is used to make fertilizer, cosmetics and feed for livestock and farmed fish. 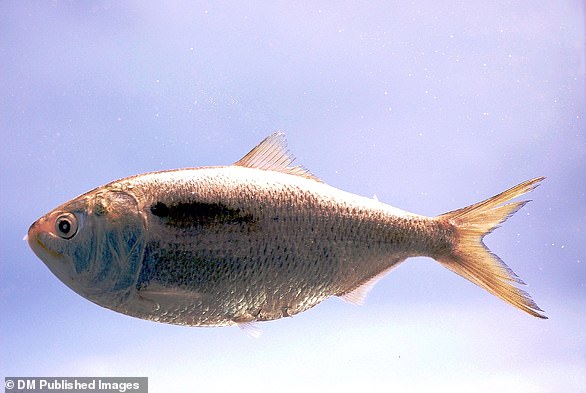 Brits admit they are 'rubbish' at messaging back friends and family – and can take MONTHS to return calls, survey says