Several thousand protesters have descended on Victoria’s Parliament today, after a week of sit-in protests against the state government’s controversial pandemic bill.

Organisers are hoping for numbers as big as last week’s CBD rally which attracted at least 10,000 people. The anti-lockdown and anti-vaccine mandate rallies have been held weekly for months. 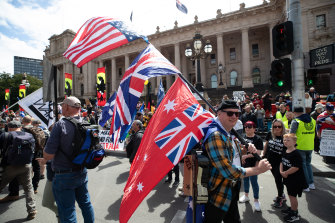 Protests are billed around the country today, with rallies to be held in Melbourne, Sydney, Brisbane, Adelaide, Perth, and Darwin today, as well as a number of regional cities.

The protesters are a loose group who oppose vaccines, vaccine-mandates and passports. In Victoria, they oppose the pandemic bill which is currently stalled in the upper house.

Many conspiracy theorists attend the protests.

In Sydney, ex-Liberal MP Craig Kelly is listed as a crowd speaker. The Age revealed Mr Kelly has recruited a number of key figures in the “freedom” movement for Clive Palmer’s United Australia Party.

In Melbourne, a counter-rally is planned to take place at the same time as the anti-pandemic bill protesters, with Victorian Greens Leader Samantha Ratnam and Reason Party Leader Fiona Patten both endorsing the event.

It is the first time a counter-protest has been organised against anti-lockdown and anti-vaccine demonstrations.

Both Ms Ratnam and Ms Patten have been in the news this week as the government works to convince crossbenchers to support its bill – a bill that would transfer public health powers from the Chief Health Officer to the Premier and Health Minister.

Critics say the powers are too far-reaching and do not allow for proper parliamentary scrutiny of decisions.

Saturday’s protest comes after a week of at times toxic rhetoric around Premier Daniel Andrews and his government’s legislation, with home addresses of MPs shared in encrypted chat groups as well as threats of violence against the Premier.

U.S. slaps sanctions on 7 Russians in response to Navalny poisoning

Students will have staggered return to university over five-weeks