Police identified two of the three victims: Luis Cuadros, 30, of Elmhurst, Queens, and Quameek Mack, 25, of Freeport L.I. The third person was not yet named.

The accident happened at around 4:45 a.m. on Borden Avenue and 29th Street in Long Island City, under the Long Island Expressway. 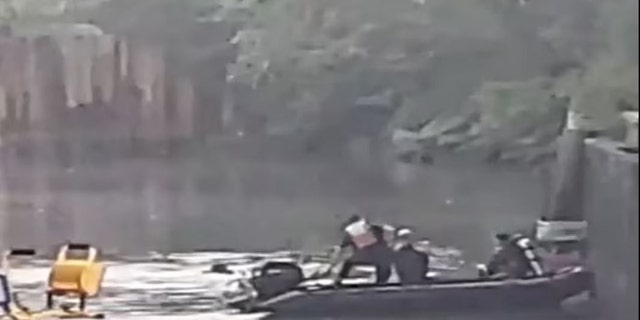 A witness told The Post that he saw the “souped-up black sedan with a modified exhaust speeding down a dead-end street,” on Borden Avenue.

The mangled car was pulled from the water later Saturday.

Police saw no property damage around the area of crash.

The witness said it isn’t unusual to see drag racers in the area because Exit 15, Van Dam Street, is the last exit before the tolls of the Midtown Tunnel. In order to avoid the tolls, racers usually get off there.

Moment man climbs out of window and dangles child from ledge