Terrifying moment a tiger leaps on to a man and knocks him into a 15ft pit after straying into Indian town, attacking scores of people and injuring at least two

A tiger charged at a man and sent him sprawling into a 15ft pit today after straying into a town and menacing locals in India.

The Bengal tiger – feared to have escaped from a nearby nature reserve – attacked scores of people, injured at least two and has yet to be brought under control.

Footage of its terrifying leap at a man who was fleeing its pursuit shows the moment that man and tiger went tumbling into the pit while others rushed to escape.

Vets and forestry officials hurried to the scene as they prepared to tranquilise the tiger, but they fear that firing a dart in the open could lead it to attack others. 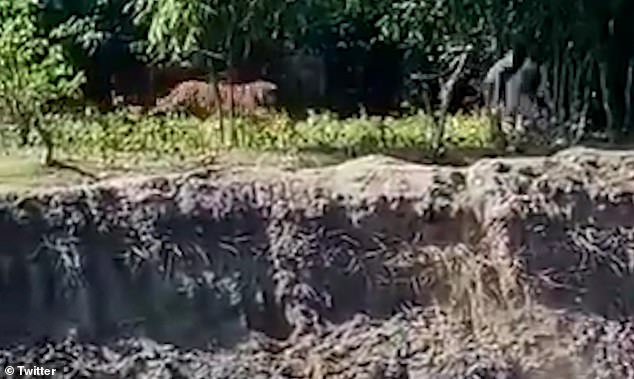 Pursuit: A Bengal tiger gives chase to a man trying to flee from its path in an Indian town where the animal attacked locals after a suspected escape from a nearby nature reserve

The tiger was still believed to be roaming in the open on Wednesday morning, according to Times Now.

P Sivakumar, a forestry official in the town of Tezpur, said a team was ready to tranquilise the animal to drive it away ‘if the need arises’.

‘It becomes easy to tranquilise the tiger if it is confined to a building,’ he said.

‘But it becomes tough when the big cat is roaming in the open. After a dart shot, the tiger might flee and may attack other people.’ 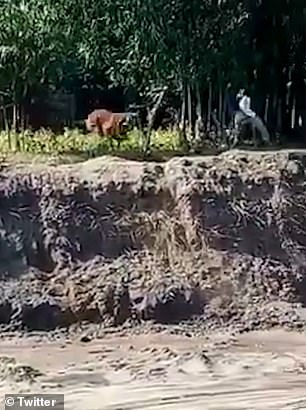 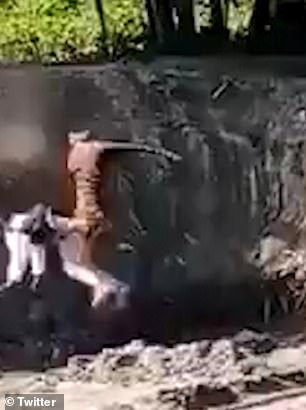 Crash: The tiger leaped at the man (left) and sent them both tumbling into the pit while others escaped from the rampaging animal 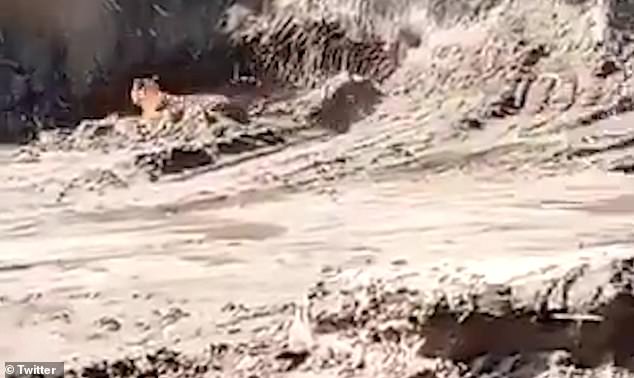 The tiger is still believed to be in the open in the town of Tezpur, where forestry officials fear it will react dangerously if it is tranquilised near humans

India is home to the majority of the world’s wild tiger population, with nearly 3,000 identified in a ‘census’ last year.

PM Narendra Modi hailed India as one of the safest habitats for tigers in the world as he announced that numbers had doubled in the space of just four years.

Bengal tigers are a type of continental tiger alongside the Malayan, Indochinese and Amur varieties, the last of which are mainly found in Russia.

The Caspian tiger is believed to be extinct in the wild, while another species, the South China tiger, has not been seen in the wild for decades.

There are also island tigers in south-east Asia, but the WWF says they are now limited to Sumatra, with tigers in Java and Bali now extinct.