Home » World News » Tom Cruise could be going to space

From harrowing leaps of faith in the “Mission: Impossible” films to daredevil dogfights in “Top Gun: Maverick,” Tom Cruise has gone from one of the world’s most famous actors to one of its most death-defying stuntmen. Where he might go next, however, no leading man has gone before.

“Tom Cruise is taking us to space. He’s taking the world to space. That’s the plan,” Donna Langley, the head of Universal Pictures, told the BBC.

“We have a great project in development with Tom, that does contemplate him doing just that,” Langley continued, per Variety. “Taking a rocket up to the space station and shooting and hopefully being the first civilian to do a spacewalk outside of the space station.”

The unprecedented project reportedly has a budget of $200 million and would reunite Cruise with Doug Liman, who directed the star in “Edge of Tomorrow” (2014) and “American Made” (2017) along with a string of stunt-laden “Mission: Impossible” movies.

Langley told the BBC the script “actually takes place on Earth, and then the character needs to go up to space to save the day” and described the protagonist as “a down-on-his-luck guy who finds himself in the position of being the only person who could save Earth.” 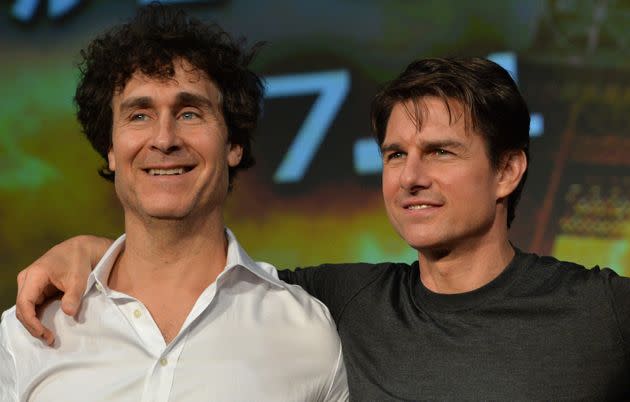 Doug Liman and Tom Cruise previously collaborated on “Edge of Tomorrow” and “American Made.” (Photo: YOSHIKAZU TSUNO via Getty Images)

Cruise has proven himself as the right man for the job. The actor previously scaled the world’s tallest building for “Mission: Impossible — Ghost Protocol” and strapped himself to the outside of a plane for its sequel. He filmed a harrowing HALO jump for the sixth installment of the franchise.

This upcoming project would require more than stunt professionals, according to Variety. Both NASA and SpaceX are interested in collaborating on the effort, with a potential spacewalk upping the ante. This would be the first narrative feature film to shoot in space.

“When a producer proposes something as insane as shooting a movie in outer space and the project actually starts to happen … you entertain the idea because of from whom it came,” Liman told Thrillist in 2021. “You’re like: Maybe the impossible is possible.”

Cruise, who reportedly earned $100 million for “Top Gun: Maverick” after it grossed more than $1 billion worldwide, would enter the Liman project with similar prospects as its producer and star.

This article originally appeared on HuffPost and has been updated.

Ahmaud Arbery trial: Police officer testifies he would have given trespass warning