Olympic diving star Tom Daley has called for a boycott of next years’ Fifa World Cup in Qatar because of the host country’s ‘extreme rules about LGBT people and women’.

The Olympic athlete, who won gold and bronze medals at Tokyo 2020, said he was making it his ‘mission’ to ensure countries that criminalise homosexuality are not allowed to compete at future games.

Mr Daley, who confirmed his sexuality, in 2014, in an emotional YouTube video to fans, said countries, like Qatar, ‘that criminalise against basic human rights’ should not be allowed to host a sporting event.

He made the comments after collecting the Attitude Sport award at Virgin Atlantic’s 2021 Attitude Awards on Monday night.

Concerns have been raised about the treatment facing gay fans attending next year’s World Cup due to the country’s conservative religious code prohibiting same-sex relations. 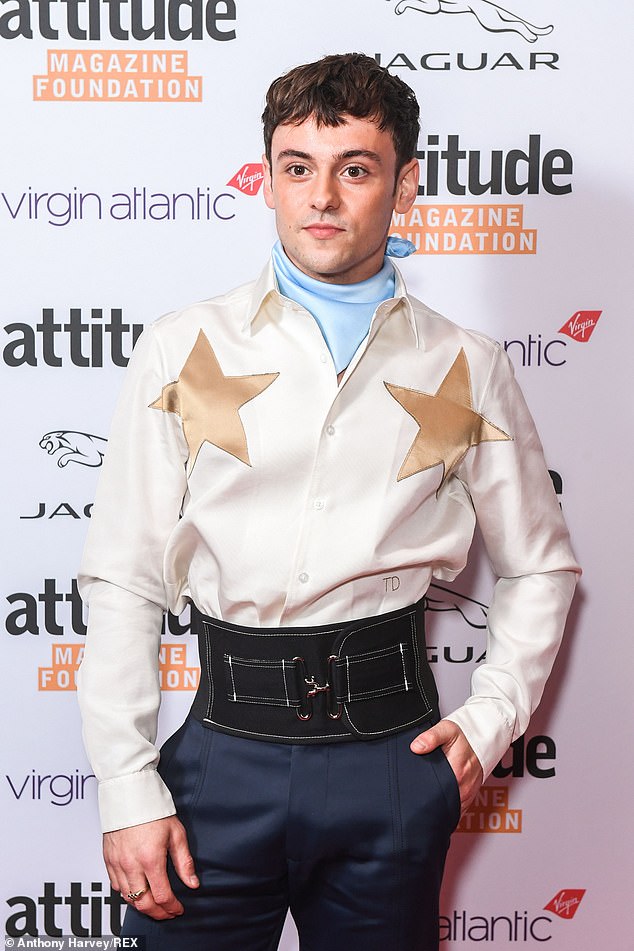 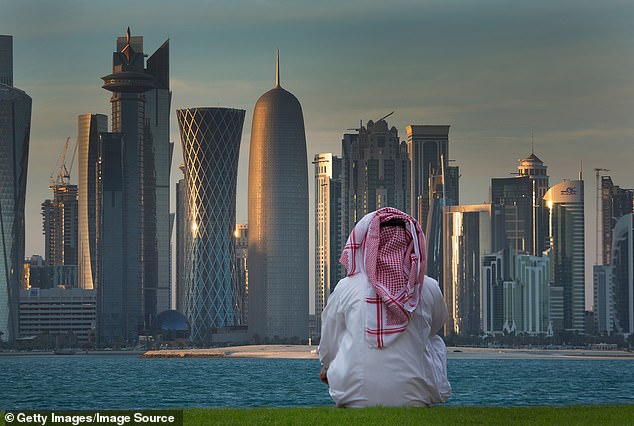 Qatar, where a conservative religious code prohibiting same-sex relations, is due to host next year’s Football World Cup (file photo)

Mr Daley said: ‘The World Cup coming up in Qatar has extreme rules against LGBT people and about women.

‘And I think it should not be allowed for a sporting event to host in a country that criminalises against basic human rights.

‘So that is going to be my mission now to try and change that.’

Mr Daley also referenced the Olympic Games and hoped to ban all countries that criminalise homosexuality from competing in future games, including the next event in Paris in 2024. 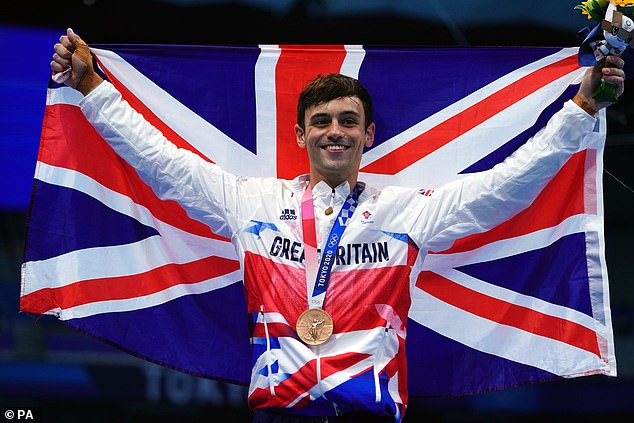 Tom Daley said there is still a ‘long way to go’ for LGBT rights, pointing out that in 10 countries who competed this year homosexuality is still punishable by death

He added: ‘These past Olympic Games, there were more out LGBT athletes than any of the previous Olympics combined, which is a great step forward.

‘Yet there are still ten countries that punish being gay with death that there will still allowed to compete at the Olympic Games.

‘And I think that is quite shocking to a lot of people because I know I’ve spoken a lot about that, but at the same time, it’s all well and good to be able to speak about those things, but I think it’s really important to try and create change rather than just highlighting and shining a light on those things.

‘So, I want to make it my mission, hopefully, before the Paris Olympics in 2024 to make it so that the countries that criminalise and punishable by death for LGBT people are not allowed to compete at the Olympic Games.

‘I am incredibly lucky to come for Great Britain, where I am able to be my true authentic self and compete without worry of ramification.

‘And I feel like wherever you are born, you should be able to have that stress taken away from you.

Mr Daley did not name the specific countries but, according to the Washington Post, homosexuality may be punishable by death in Yemen, Iran, Mauritania, Nigeria, Qatar, Saudi Arabia, Afghanistan, Somalia, Sudan and the United Arab Emirates. 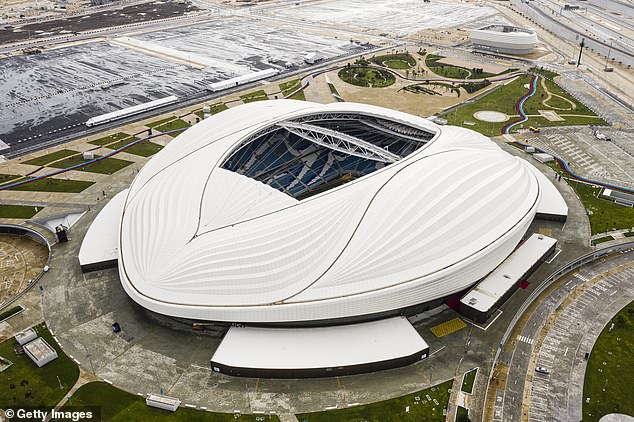 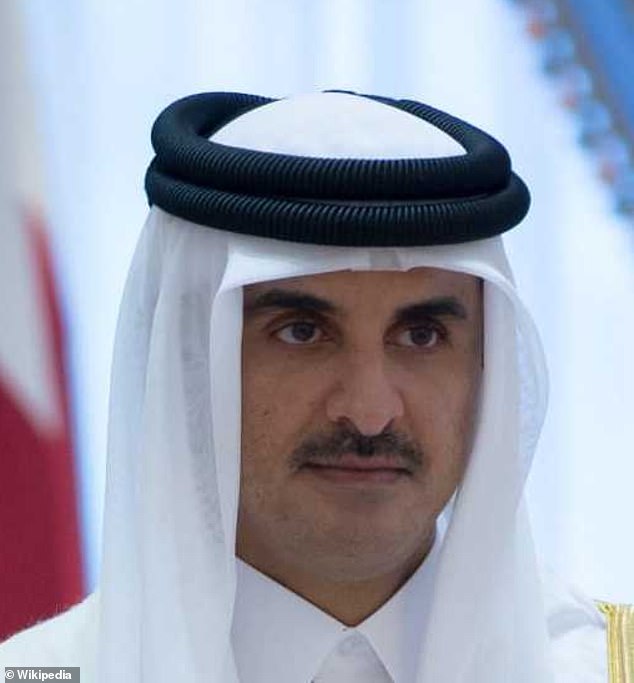 In Qatar, under Sharia law, homosexuality is considered abnormal and is punishable by three years in jail.

Gay men and women in the gas-rich Gulf city-state are persecuted and, ever fearful that their double lives will be uncovered, exist in a constant state of anxiety, the Mail of Sunday discovered last week.

The country will welcome 1.5 million football fans next year as it hosts football’s biggest tournament in November 2022 despite having a stifling climate and no football culture.

Mr Daley previously called out homophobic comments aimed at him during the Tokyo Olympics in the summer.

Russia’s Channel Rossiya 1 made a number of bigoted slurs against Daley during the Tokyo Games, as well as against other LGBT athletes, by referring to homosexuality as an ‘abomination’ and a ‘perversion’. 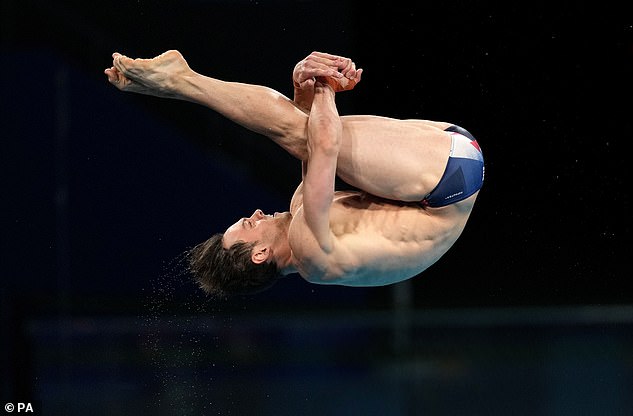 Tom Daley competing at Tokyo. He won a gold medal in the men’s 10m synchronised diving for Team GB

Speaking in response to the bigoted remarks, Mr Daley said: ‘I had no idea. When we’re at the Olympics, we’re in a bubble and we don’t really see anything.

‘History shows that everything that society is has been dictated from the straight, white, male experience.

‘If we could come together and use different points of view, the world would be a better place.’

After collecting his award on Monday, Mr Daley also thanked his husband Dustin Lance Black and their son Robbie.