Thug Tommy Robinson has been banned from all football matches home and abroad for four years after being filmed punching a fan outside an England match in Portugal.

The 38-year-old far-right extremist, whose real name is Stephen Yaxley-Lennon, was filmed punching an England fan to the ground in Portugal while the national team were playing in the Nations League finals in June last year.

The footage was obtained by the Mirror, and was used by Bedfordshire police to bring a civil case against Yaxley-Lennon this week, according to the newspaper. 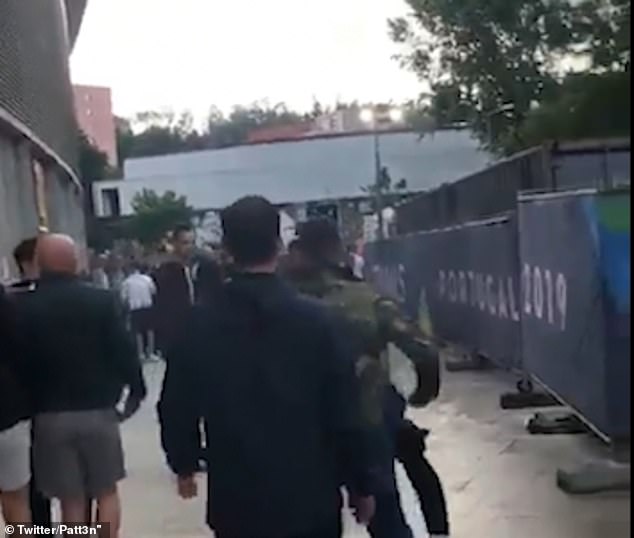 Tommy Robinson (whose real name is Stephen Yaxley-Lennon, shown from behind wearing a camo-jacket) was filmed last year punching another England fan to the ground 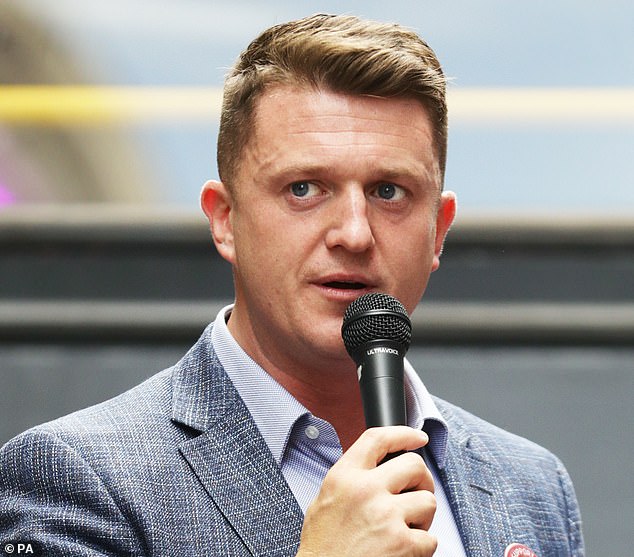 Yaxley-Lennon (pictured) has been banned from ‘all regulated football matches, home and abroad’ for four years, which will include England at the next two European tournaments as well as the 2022 World Cup in Qatar

As a result, he has been banned from ‘all regulated football matches, home and abroad’ for four years, which will include England at the next two European tournaments as well as the 2022 World Cup in Qatar.

The video showed Yaxley-Lennon hitting another England fan before England’s 3-1 defeat to the Netherlands on June 6, 2019.

The former leader of the English Defence League approached the England fan, who told the thug ‘You do not represent me’.

Recalling the incident, a witness said ‘Robinson throws a punch. This is from a man trying to become an MEP’.

Yaxley-Lennon had campaigned to become an MEP in the north-west in 2019, but polled just 2.2 percent of the vote, losing his £5,000 deposit.

He said the man had been rowdy and abusive towards him, and said after the incident in Portugal: ‘I was with my wife. If people get physical, I am not going to wait for them to attack me… the man needs to keep his views to himself.’

Prior to the game, Yaxley-Lennon has posted a message online saying ‘No football banning order here, mate’, believed to be in reference to a banning order applied by Bedfordshire Police over a flag that read ‘F*** ISIS’ at Euro 2016.

The force said that it was inciting hatred against Muslims, but Yaxley-Lennon successfully challenged the order.

The same police force worked with the UK’s Football Policing Unit to obtain the order that has now banned him from football matches until 2024, and also orders him to pay £3,600 in costs.

A spokesperson for the court confirmed to The Mirror that the order was granted for ‘causing or contributing’ to violence.

Yaxley-Lennon was convicted of hooliganism in 2011 for leading a group of 100 Luton Town fans in a skirmish gainst a group of Newport County fans.