Boris Johnson and the Tories’ lead over Jeremy Corbyn and the Labour Party has dipped to nine points in a new poll as Lib Dem support has been squeezed.

The Conservative Party is on 42 per cent overall in the new Survation survey for ITV’s Good Morning Britain programme while Labour is trailing on 33 per cent.

However, the numbers show Labour has gained three points since the company’s previous poll which was published on November 25 while the Tories are up just one per cent.

Both parties appear to have been helped by a reduction in support for their rivals. 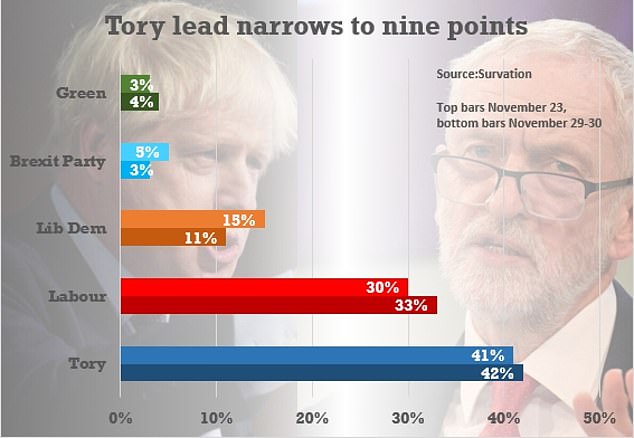 It suggests that Labour has been able to win over some Remain voters from the Lib Dems while the Tories have won over many Eurosceptics from the Brexit Party.

The poll numbers increasingly suggest that the 2019 general election is following the pattern of the 2017 general election which saw the two main parties gradually garner more and more support until they both ended up around the 40 per cent mark.

The rise in support for Labour comes after the party unveiled its election manifesto which set out plans to increase annual public spending by £83 billion.

The party’s manifesto pledged to scrap tuition fees, introduce a four-day working week and nationalise a number of industries including water and rail.

The Survation poll follows numerous polls which have suggested the race for power on December 12 is tightening, with the chances of a hung parliament appearing to increase.

A survey conducted by BMG Research and published yesterday gave the Tories a six point lead over Labour.

The Conservatives were down two points to 39 per cent in that poll – conducted between November 27-29 – when compared to a previous survey conducted on November 21.

But Labour was up five points to 33 per cent overall. 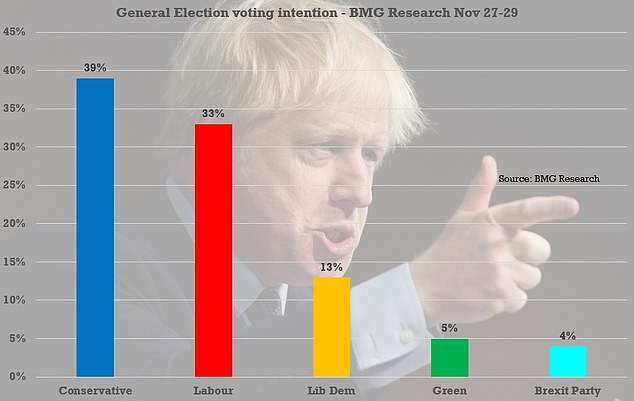 If such a result was replicated at the ballot box later this month it could mean no single party having an overall majority in the House of Commons.

The six point lead recorded by BMG Research is believed to be the narrowest yet seen during the campaign.

But it is not the only poll to suggest that Labour is gaining ground on Mr Johnson.

A survey conducted by YouGov between November 28-29 put the Tories on 43 points – the same rating as the company recorded on November 26.

But Mr Corbyn’s party was up two points to 34 per cent as the Tory lead shrunk to single figures.