London: The temples will not hold their fairs, the trains and planes will not run and the new movie releases, from Leap to Chinatown Detective 3, have been cancelled. China must spend this New Year holiday racing to detect and contain a new respiratory disease, the Wuhan coronavirus, which has killed at least 26 people and scientists think has spread to several thousand.

There is good news. The virus is not as deadly as SARS. In fact, it is only about 10 times as deadly as seasonal flu, meaning 98 per cent of people who get it will survive (versus 85 per cent for SARS). While this isn't exactly wonderful, it isn't apocalyptic either. Crucially, however, China is managing the Wuhan virus very differently from how it managed SARS in 2003. 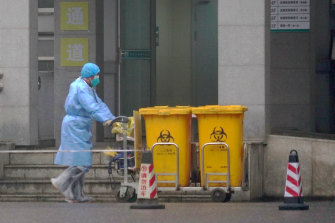 A staff member moves bio-waste containers past the entrance of the Wuhan Medical Treatment Center in Wuhan, China, where some people infected with a new virus are being treated.Credit:AP

According to Peter Kellam, a virus professor at Imperial College, London, the most important factor in managing a pandemic is "sharing". This is hardly an area in which Chinese authorities have traditionally excelled, but for scientific purposes, both China and international institutions appear to have learnt from Beijing's disastrous attempt to cover up SARS. Scientists across the world have been given access to data like confirmed infection rates and the virus's genome, allowing the system to gear up quickly, developing diagnostic tests and researching potential drugs. An inspection team from the World Health Organisation visited Wuhan this week and "commended" the Chinese authorities for their handling of the crisis.

As so often in China, however, the boundaries of freedom are strictly drawn. Official state media outlets have kept reporting low-key, placing news of the outbreak below reports of Xi Jinping's latest marvellous speech. For now, non-state media have had their leash loosened, but they are ever-alert as to when it shortens again. Whether it is air pollution, anti-foreign rage or product contamination, the pattern is the same. Periods of relative openness are followed by crackdowns before the debate gets "out of hand".

In some ways, a totalitarian regime might be seen as uniquely well-suited for handling a pandemic. Quarantining a zone of some 30 million people, as China is attempting around Wuhan, has never been done elsewhere. Beijing's desire to build a surveillance network capable of tracking every single individual always and everywhere sounds like it might be useful in tracing infection. And Westerners are dumbfounded to hear that the city's authorities are erecting a new hospital within a week. 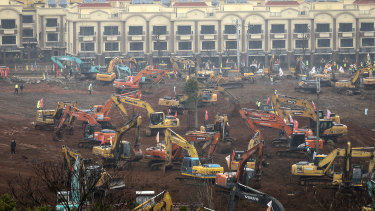 Human adaptation to threat is not quite so straightforward, however. The desire for total control, and the illusion of having it, can be just as dangerous as it is efficient. On Monday, Xi issued an edict commanding officials to put "safety and health" before all other objectives. Unfortunately, when you have built a political culture on lies and censorship, it is difficult to change the habits of a lifetime by decree.

There are multiple reports suggesting that Wuhan city authorities leaned heavily, in the initial stages, on local media and hospitals to stop news spreading of a new virus, and information is still being tightly controlled. Scientists abroad may well have been inspecting its genome well before locals were given any comprehensive information about the disease.

From here, it might seem inconceivable to think that a government can control the spread of domestic news about a major disease outbreak involving a quarantine of 30 million people during the busiest travel time of the year. But Beijing is experienced in such matters. In 2008, authorities permitted a cover-up that led to 300,000 babies being poisoned by contaminated milk formula in order to avoid embarrassment ahead of hosting the Olympics. And across the country, the real death toll – 20 to 30 million people – of Mao's great famine just two generations ago, is still not widely known.

Where cover-ups become tricky is when they hit international scrutiny. It was New Zealand that blew the whistle on the poisoned formula scandal, just as it was the international backlash that made the suppression of SARS impossible and therefore highly politically damaging to the Communist Party. Clearly, the party has learnt this lesson when it comes to managing disease.

Domestically, however, Chinese citizens know that they rarely get the full story from their media or government. It might not directly affect medical collaboration abroad, but it undermines the trust needed to manage public responses during a crisis like a pandemic. If the government tells its citizens not to travel, to report suspicious symptoms or to take protective measures, for example, its advice is more likely to be heeded if it does not have a longstanding habit of lying. And in a really deadly epidemic, living under a government that views its people's lives as disposable could rather change the calculus over whether to go and get tested for a suspected infection.

More broadly, it is difficult to change ingrained habits in a system riddled with corruption and distrust. New diseases like the Wuhan virus, as well as bird and swine flu, are known to be especially liable to emerge from food systems in which live, wild game mixes freely with concentrated populations, cooking and slaughtering. Officially, trade in wild animals, from delicious-sounding wild duck to the rather less appealing civet cats and pangolins, is strictly controlled in China.

In practice, undercover reporters find live specimens of the poor creatures on sale all over the place, like the market where the Wuhan virus is thought to have originated. I've seen such a sight myself in a Chinese market, though it was about seven years ago: rows of sorry-looking, panting animals in cages or live insects being snapped in half right next to raw meat being prepped for cooking. 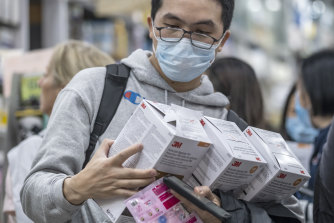 A customer inspects respirators at a pharmacy in the Central district of Hong Kong.Credit:Bloomberg

For now, Chinese media are being given relatively free rein to report on the problem. But how long will it be before they investigate too far up the chain and cross the wrong person – some senior official with an interest in the trade, for example – and the window of freedom closes?

Clearly, China's management of disease has improved enormously in the past 15 years and we are all safer for it. But openness to science has not translated into openness for ordinary citizens. Unfortunately, this capricious boundary means that a society that produced outbreaks like SARS, bird flu and a live swine flu epidemic that is even now devastating the country's pork industry, still cannot openly debate the question: "How does this keep happening to us?"

Passengers evacuate plane at Cardiff as engine ‘blows up’

'We don't see the enemy': concealed jihadists slow IS defeat

As investigators try to ID girl found in duffle bag, a missing child turns up safe