Behind every great man! Tottenham stars Harry Kane and Kieran Tripper share a smooch with their other halves as they prepare for the Champions League final against Liverpool

Tottenham Hotspur players shared a special moment with their families ahead of what could be the biggest game of their lives on Saturday.

Stars Harry Kane and Kieran Tripper were spotted sharing a smooch with their other halves at the Wanda stadium in Madrid, Spain, after a training session, while doting fathers Fernando Llorente and Toby Alderweireld played with their children.

The team, which has never competed in a Champions League final, is playing against five-time European title winner Liverpool FC – which got to the 2018 final before losing 3 – 1 to Real Madrid.

Tottenham coach Mauricio Pochettino said today, after his team eliminated Ajax 3 – 2 in the semifinals, that it is now up to the players to go out there and make history. 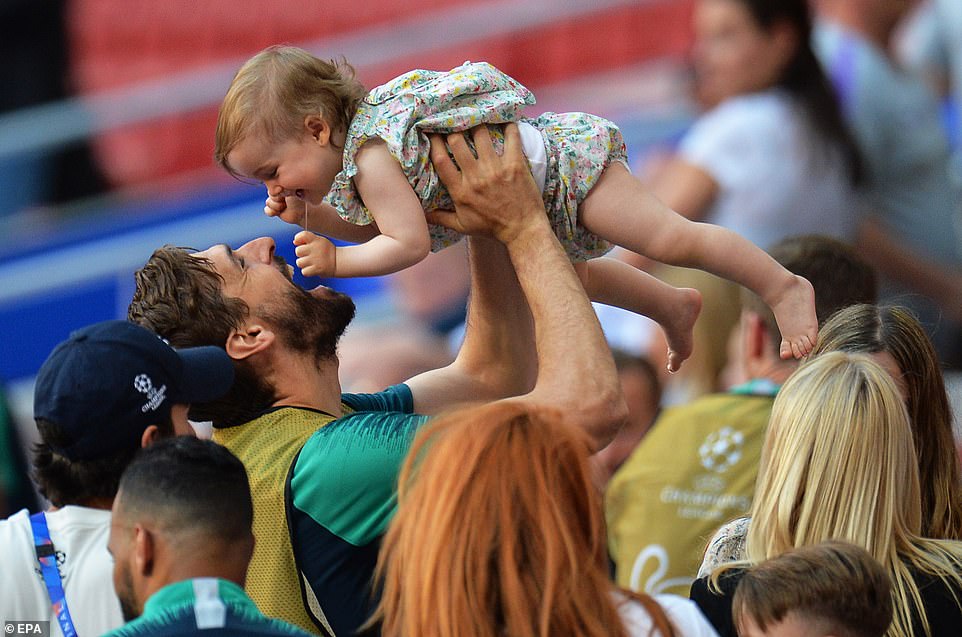 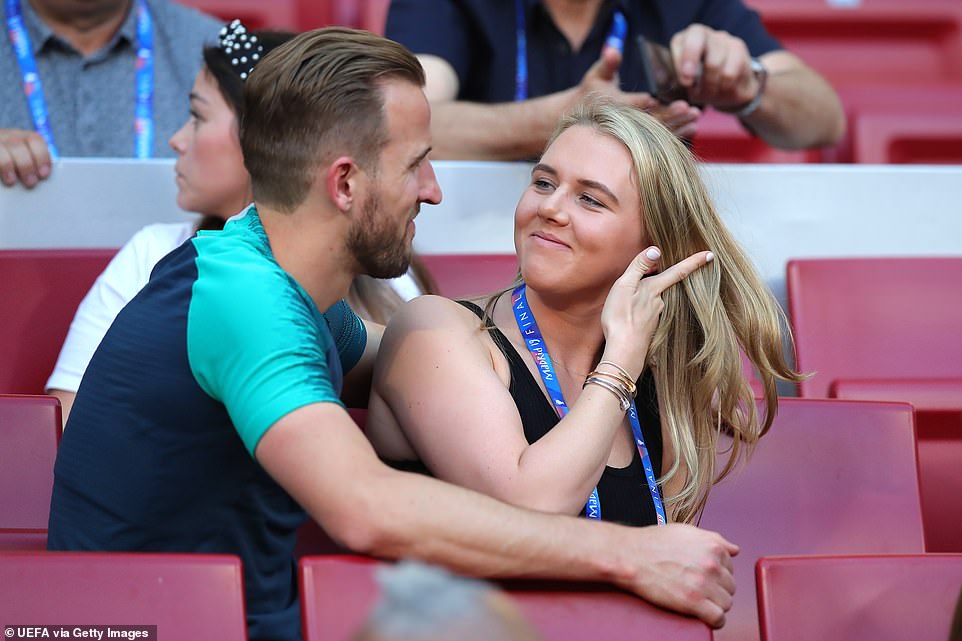 Harry Kane shares a romantic moment with his fiance Katie Goodland at the Wanda stadium in Madrid, Spain 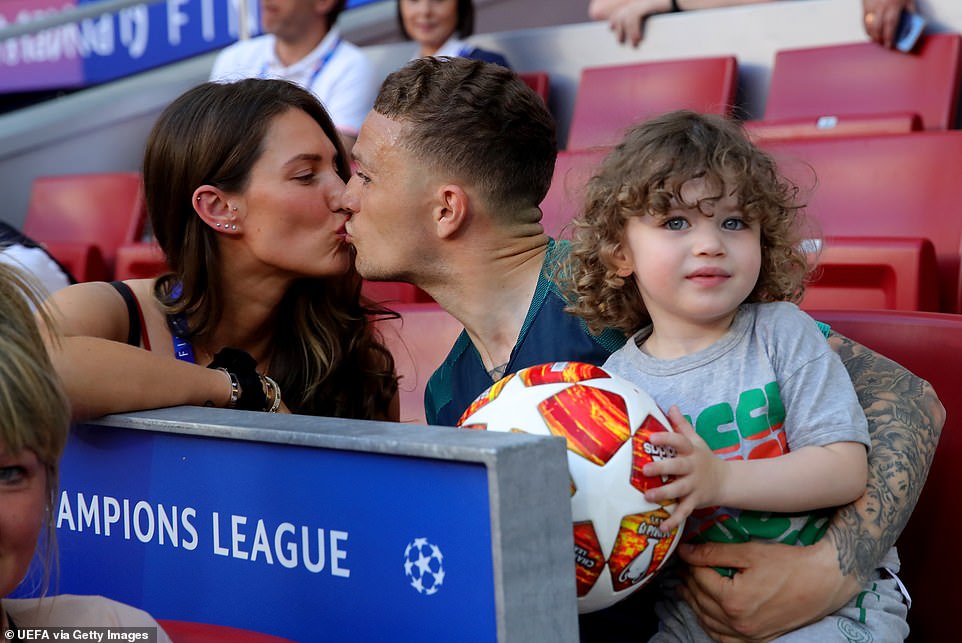 Husband Kieran Trippler shares a kiss with his other half, Charlotte, as their child Jacob poses for the camera with a football 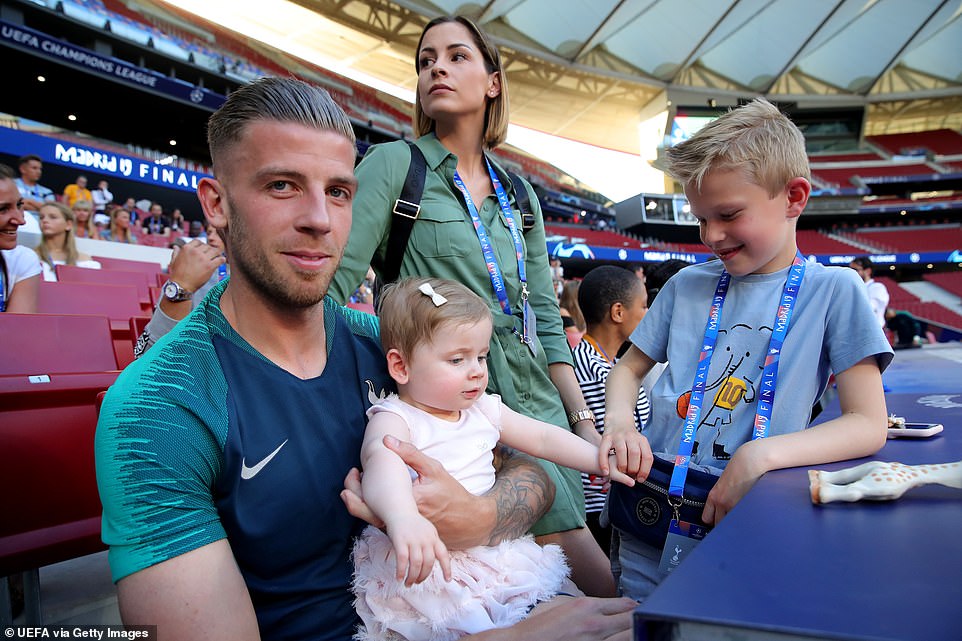 Pochettino believes his team have been stress-tested during a campaign littered with complications; from the World Cup, injuries and the transfer market to delays with the new stadium.

‘All those difficulties have made us stronger as a group, more creative and we have shown if you believe and work hard in football you are rewarded,’ he said.

‘The moment you get to the final, it’s about winning the final,’ he said. ‘We trust in ourselves.’

The north London club, which hasn’t won an English title since the 1960s, made a remarkable run to its first Champions League final after it beat Pep Guardiola’s Manchester City in the quarterfinals and romping past Ajax in the semi-final.

Liverpool, one of Europe’s most successful clubs, also needed some heroics to return to the final, reversing a 3-0 first-leg defeat against Lionel Messi’s Barcelona in the semifinals.

Klopp said Liverpool has matured significantly from the 3-1 loss to Real Madrid in last year’s final in Kiev, having made all the necessary adjustments to be able to win its first European title since 2005.

“We are much more mature. It’s a good thing we are getting older, from all points of view,” said Klopp, who also lost a Champions League final while coaching Borussia Dortmund in 2013. “We are a year older, we have players like Trent (Alexander-Arnold) who has 50 games more in his legs, he has more experience in football.”

Klopp said there was not much the team can take from the actual final last year. It was a different opponent and different circumstances, but it gave the squad a mental edge going into this year’s match.

“The boys performed in that final, it was not like we had no chance,” Klopp said. “(We played against) a clear favorite, so that was OK, that helped us as well. But last year we were surprised about ourselves a little bit that we were in the final. We weren’t as consistent as we are now. That was the main thing that we had to develop.”

Klopp is set to have Mohamed Salah available for Saturday’s match after he missed the second leg of the semifinals because of a concussion. The Egyptian forward had to leave last year’s final in the first half because of a shoulder injury. 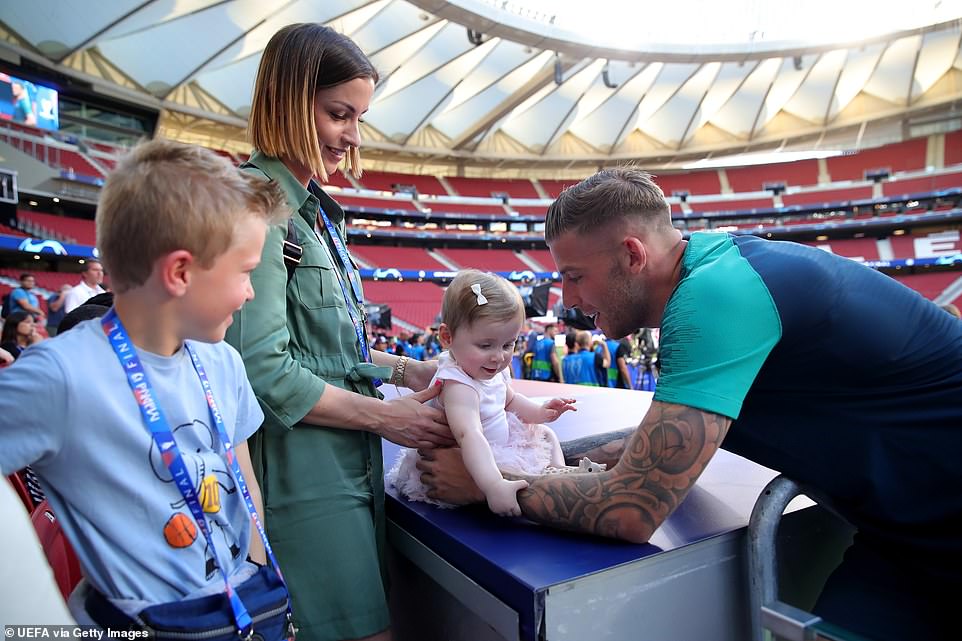 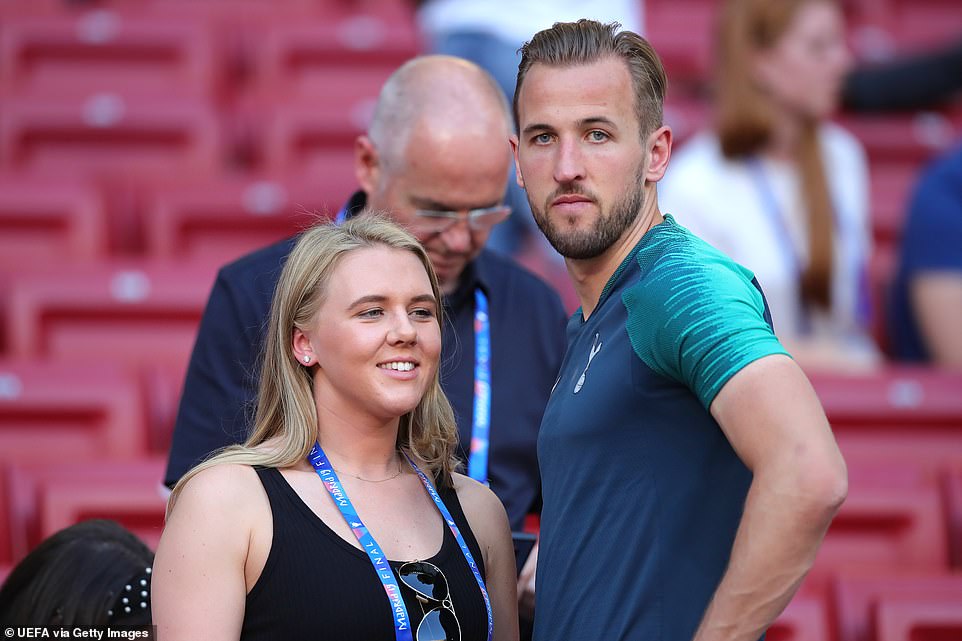 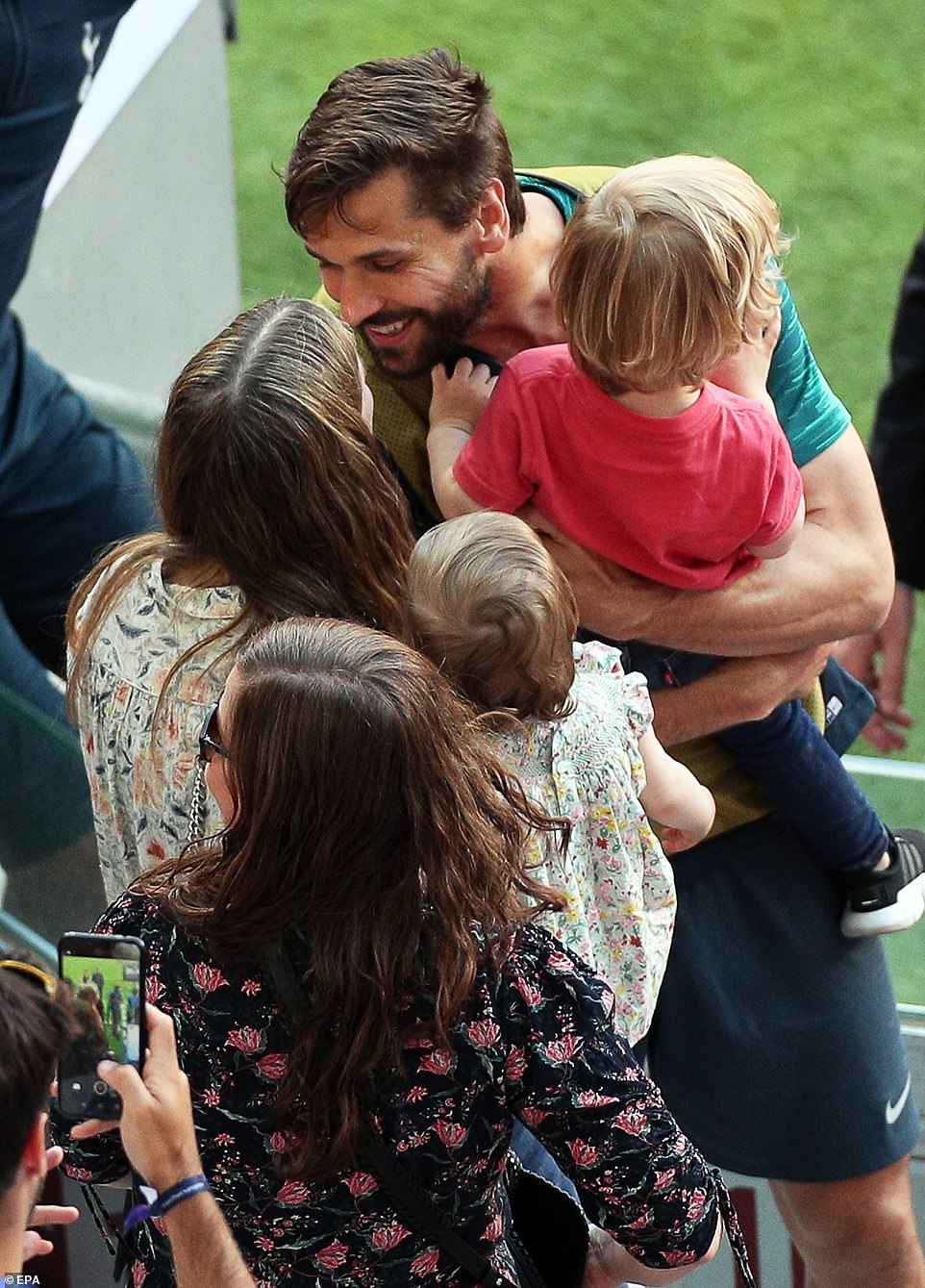 Fernando Llorente smiles with family members after a training session at the Wanda stadium in Madrid, Spain 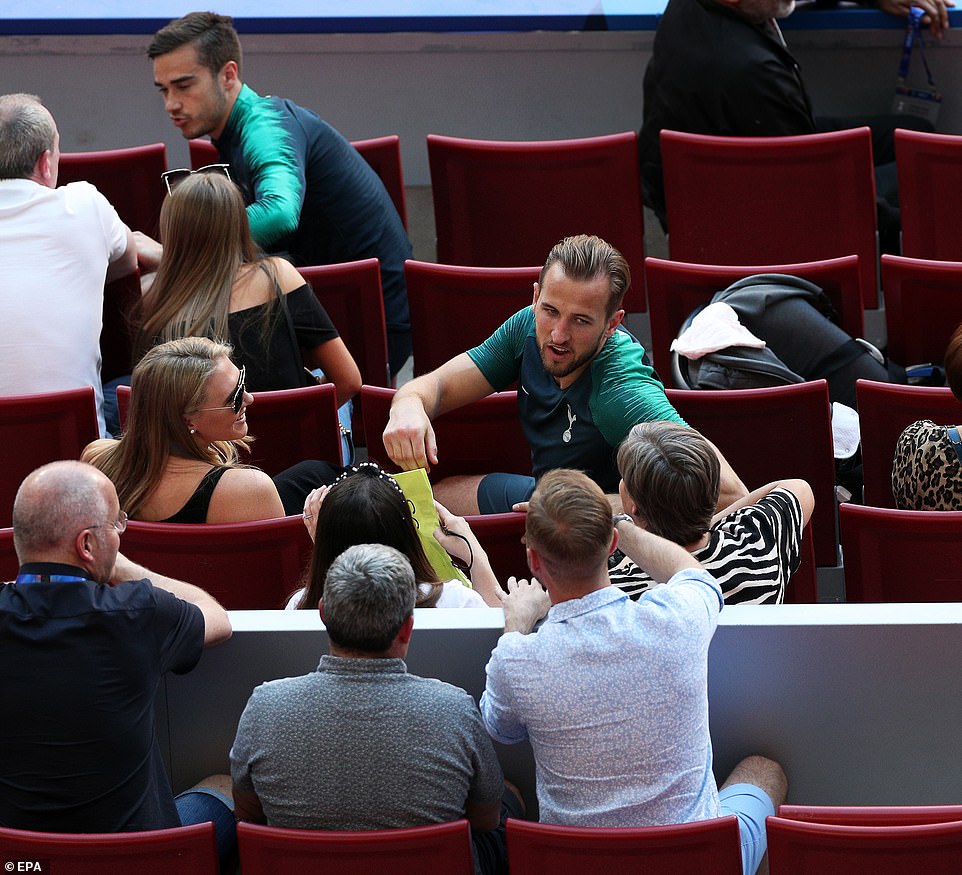 Mel B is ‘unemployed’ in child support battle with Stephen Belafonte