One in 10 infected, 500 dead a day, eight COVID tests to get in and out. The numbers were staggering, but after two years of waiting, there was never going to be a right time for a holiday.

The staff manning the COVID testing station at the international airport in Warsaw, Poland, were startled when I walked in the door. The flight from Singapore via Helsinki was full, but few other travellers took the opportunity to do their tests behind baggage carousel number 5. 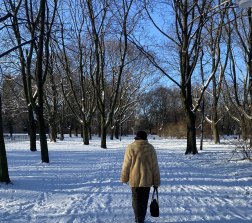 A white Christmas greeted the author on arrival in Warsaw.Credit:Eryk Bagshaw

COVID deaths hit 596 that day but no one at the international terminal seemed particularly bothered. The QR code on my vaccine passport did not work; the border guard waved me through anyway. When I entered the testing centre, the two young workers, glued to their phones, scrambled to put on the medical gowns slouched below their waists. One only managed to get his mask halfway between his nose and mouth before typing in my details.

The Asian COVID world I was used to in Singapore, defined by density limits, masks and social distancing was suddenly gone. It is nowhere to be seen in many parts of Europe. The virus has already overrun the continent four times over.

Warsaw greeted me with minus 10 degrees and hospitalisations pushing past 20,000 a day – 10 times the level of Australia – but it was Christmas, it was snowing, and it was beautiful.

The golden lights carpeting Krakowskie Przedmieście, one of the best known streets in Warsaw, outshone the gloomy predictions of Health Minister Adam Niedzielski who warned the country was “facing a catastrophic scenario” once Poles got through their 12 courses of Christmas and bottles of vodka on New Year’s Eve. 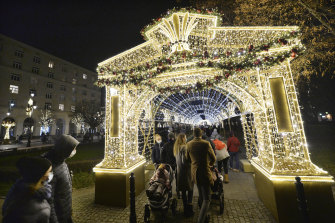 Christmas lights down one of Warsaw’s main streets. Credit:AP

Those skating around the ice rink in the Old Town square or clasping their cups of mulled wine for warmth did not seem worried. Warsaw is not Poland’s COVID problem – the regions are. Like much of eastern Europe, a legacy of post-communist distrust of government and poor rural medical information has kept the nationwide vaccination rate down at 55 per cent. 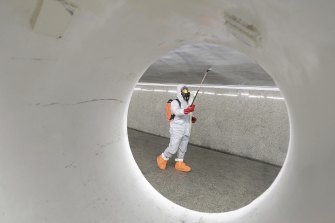 A worker wearing a protective suit sprays disinfectant at the Centrum subway station in Warsaw. Credit:AP

The day after I arrived there was a funeral. It was for a dear neighbour of my family’s. Neither she nor her family had been vaccinated. Nor had many of the residents of the village 40 kilometres north of Łódź. The villagers had long held that you can’t trust what you can’t see. Now an invisible enemy was cutting swathes through the Polish countryside. At the funeral, the mourners wore masks, but three days later when the villagers returned for Christmas Mass, many were once again without them.

COVID is everywhere and nowhere in Europe. The deaths surge ever upward but mask compliance in its busiest airports and train terminals is appalling. This is what shock therapy looks like – deaths by the hundreds but life returning – families gathering for big meals, theatres filling up and a Christmas regained after so many months lost. Those taking the risk do so in the knowledge that if they are vaccinated, getting a mild or medium illness may be an acceptable price to pay. Death rates for the mostly unvaccinated suddenly become a tragically abstract figure.

This gamble is particularly stark in the UK, where 3.7 million people had COVID the week I landed in England, up by 60 per cent from the week before. Friends in London had been infected so many times they had their favourite variants. One recommended Omicron. 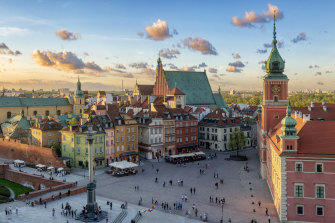 The cases marched past 200,000 a day, but the pubs and stadiums were full.

British Prime Minister Boris Johnson has lost all authority to implement stronger measures because he and his staff have flaunted them repeatedly themselves.

On New Year’s Eve, I went north with friends to an industrial part of Tottenham. At 9pm the bar was populated by a pool shark and a man dressed as an elf still playing Christmas songs. By 10pm it had become a heaving mass of revellers, sweating, singing and dancing their way towards midnight. If Siri could define a COVID superspreader event, this could have been it.

After a year of being restricted to groups of two and five in Singapore, I felt like I had to be socialised again. How do I do this? A round of tequila shots and accepting that I may get COVID and that was OK.

I am healthy, 32, fully vaccinated and in the extremely privileged position of being able to travel. I am very aware there are many who are not. I can’t pretend to know how those with comorbidities or other challenges would view the complex equation of going overseas in 2022. I was careful, regularly masked-up and sanitised often.

I took my chances and pressed on through the COVID travel gauntlet. Much of this will seem anathema to Sydneysiders or Melburnians grappling with yet another outbreak, but they have seen enough doom and gloom – for those who are fit and able, travel should be something they can look forward to once again.

The paperwork is lengthy, the COVID tests are expensive. At the moment you can add $1000 per person for any trip for all the tests you will have to take, a couple of hours of post-test COVID anxiety and the threat of seven days in isolation for good measure. Somehow I passed all eight tests. When the second last result came through (meaning I could board the flight home), I gasped with surprise outside Tower Hill tube station. 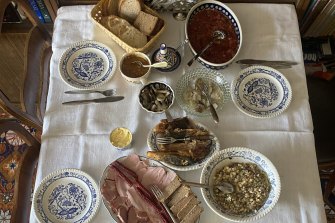 The beauty of travel now is that every moment feels like a bonus. Each conversation, adventure and meal feels like it was taken back from a pandemic that has stolen so much – 5 million lives and counting.

Every day I kept coming back to the same thought – imagine if I had not gone?

My little cousins in Poland are growing taller and my aunty and uncle are getting smaller. I wouldn’t have eaten six varieties of herring and carp on Christmas Eve, had long dinners with friends I don’t see enough of, seen deer run through the snow near Piotrków or Liverpool draw with Chelsea at Stamford Bridge.

These are beautiful memories. For those who can, it is time to get on with making more of them.