A Native American leader from Arizona grew emotional as he told a congressional committee about the pain members of his tribe feel at US officials blasting through land they consider sacred to build part of President Donald Trump’s wall along the US-Mexico border.

‘No one reveres our military veterans more than the O’odham, however, dynamiting these sacred sites and burial grounds is the same as bulldozing Arlington National Cemetery or any other cemetery,’ Tohono O’odham Nation Chairman Ned Norris told lawmakers in Washington on Wednesday.

His testimony came hours after the government carried out a new round of explosions near the southern border as a group of invited journalists watched. 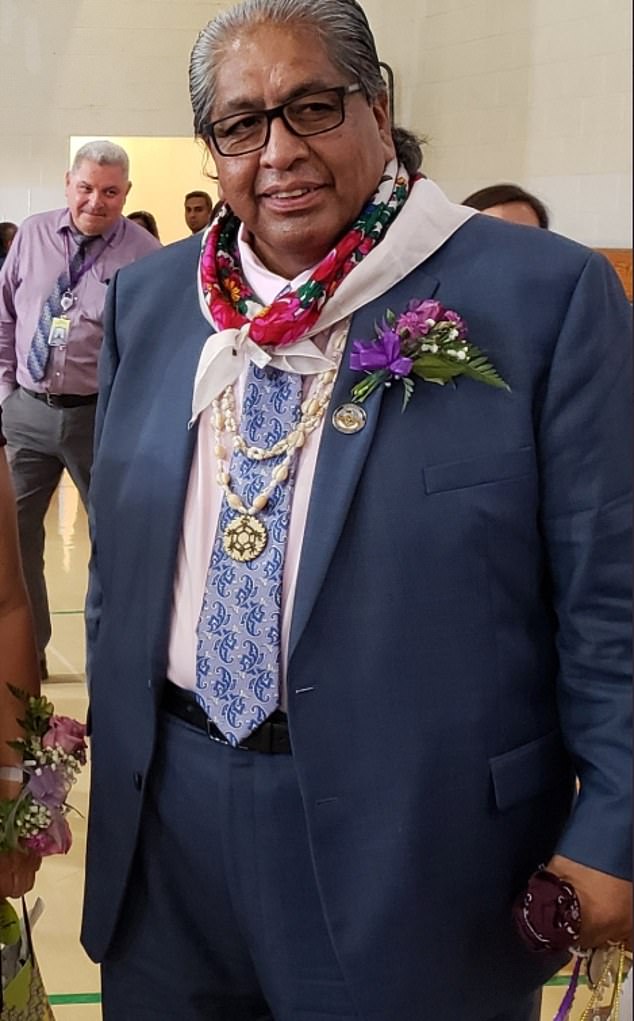 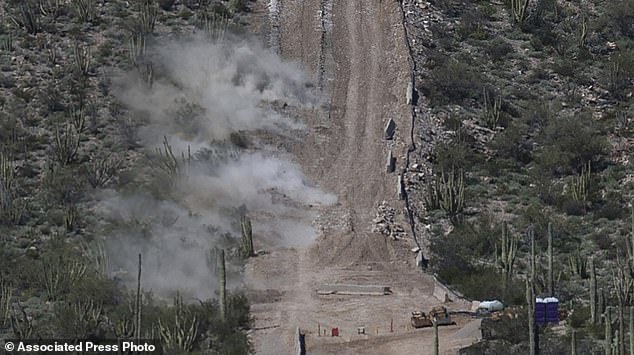 Construction crew perform a controlled detonation at the base of Monument Hill in Organ Pipe Cactus National Monument west of Lukeville, Arizona, on Wednesday

Environmental groups also are decrying the work at the national parks system site that’s named for its cactuses resembling organ pipes and is a largely untouched example of Sonoran Desert habitat.

‘It’s hard to see the blasting that you showed on the video today because I know in my heart what our elders have told us: that it is home to our ancestors,’ Norris said, choking up.

The administration says archaeological monitors working with Customs and Border Protection and the Army Corps of Engineers have found no sign of burial or other sacred sites in the area. Department of Homeland Security acting Secretary Chad F. Wolf told Congress on Tuesday that he plans to travel soon to meet with the tribe to discuss their concerns.

US Reps. Ruben Gallego and Raul Grijalva, both Arizona Democrats, also spoke against construction of the wall during the meeting of the House Natural Resources Committee’s Subcommittee for Indigenous Peoples. The Tohono O’odham Nation stretches across southern Arizona and into Mexico.

US Rep. Deb Haaland, a New Mexico Democrat and member of the Laguna Pueblo tribe, also spoke passionately, saying: ‘When tribal leaders don´t have a seat at the table, indigenous history is lost.’

US Rep. Paul Gosar, an Arizona Republican, noted that Organ Pipe is a well-known human and drug smuggling corridor and site of the 2002 shooting death of Kris Eggle, a park ranger who died while while pursuing suspected drug cartel members. 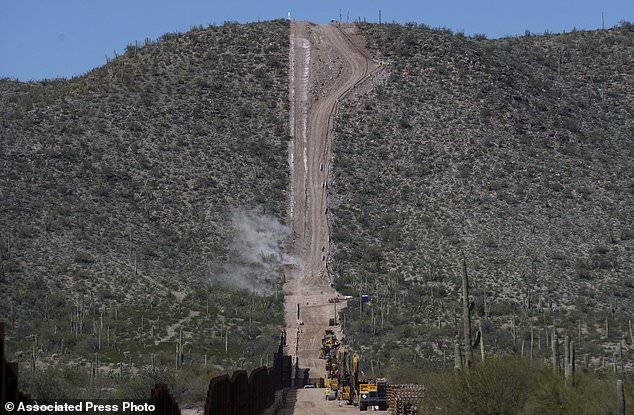 Construction crews in southern Arizona have recently began blasting hills at the site to clear space for a new border wall system, bulldozing through a place called Monument Hill to construct a 30-foot steel wall

Environmental advocates and elected officials are concerned about the wall’s potential effects in Organ Pipe, including on water from an underground aquifer and migrating animals. A desert oasis in the monument, Quitobaquito Springs, is home to the endangered Sonoyta mud turtle and Quitobaquito pupfish.

Border Patrol Chief Roy D. Villareal, of the agency’s Tucson Sector, said on Twitter in recent days that over 90% of the cactuses near the construction area were carefully transplanted, saving more than 2,000 individual plants. He also said archaeological monitors had not found burial sites or human remains in the detonation zone at a place called Monument Hill.

Laiken Jordahl of the Tucson-based environmental nonprofit Center for Biological Diversity challenges those assertions, saying on Twitter that he has seen chopped up cactus on the ground and water being wasted for concrete during recent visits.

Jordahl posted a video on social media earlier this month of one of the blasts that are carving a pathway for the wall through Monument Hill. It showed a long line of puffs of smoke and dust rising up from the dry desert landscape dotted with scrub and cactus.

The UN has designated the monument an International Biosphere Reserve.

The Army Corps of Engineers has said the Department of Defense awarded $891 million in contracts to Southwest Valley Constructors in May to build the border wall on Organ Pipe and Cabeza Prieta National Wildlife Refuge.

Afghan government says US withdrawal will not affect security