Washington: President Donald Trump will propose cutting billions of dollars in US foreign aid in his fiscal 2021 budget while seeking an increase in funds to counter developing economic threats from China and Russia, senior administration officials have said.

Trump, a Republican, sought in his budget proposal last year to slash foreign aid but faced steep resistance from Congress and did not prevail. 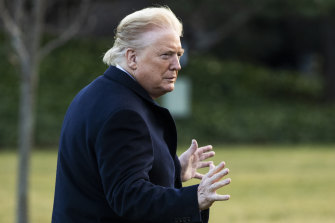 His latest budget, which will be released on Monday, is a blueprint for his spending proposals that is unlikely, again, to be passed, particularly in an election year.

Trump will seek to make a 21 per cent cut in foreign aid in the proposal, which seeks $US44.1 billion ($66.1 billion) in the upcoming fiscal year compared with $US55.7 billion enacted in fiscal year 2020, an administration official told Reuters.

Aid to Ukraine would remain at its 2020 levels under the new proposal, the official said. Trump was acquitted last week of impeachment charges that he withheld aid to Ukraine to spur Kiev to investigate political rival Joe Biden, a Democratic presidential candidate and former US vice-president.

Administration officials said Trump would request an increase in funding for the US International Development Finance Corporation (DFC) to $US700 million compared to $US150 million the previous year.

The DFC was formed in large part to counter China's growing economic influence. It serves as a development bank that partners with the private sector to provide loans in developing countries. It also serves as an alternative financing option to what the United States sees as predatory practices from China.

US officials want to counter the soft power China has wielded with such loans and help countries avoid what they consider Beijing's “debt trap” diplomacy in which countries give up control ports, roadways or other major assets when they fund infrastructure projects with Chinese loans that they cannot pay back.

"Every country knows the drawbacks of working with autocratic governments," said Adam Boehler, the DFC's chief executive, in an interview, listing poor infrastructure as one consequence developing countries faced. "There are very few countries in this world that wouldn't prefer the American private capital market…That's what we represent."

The increased budget funding would help counter economic threats and was in line with Congress's bipartisan wish the agency would have such resources, he said.

He said part of the agency's money would be oriented to driving 5G technology in developing countries.

The budget also proposes $US1.1 billion for cybersecurity efforts by the US Department of Homeland Security.

Trump's proposal would cut non-defense spending by 5 per cent to $US590 billion, which is below what Congress and Trump agreed to in a two-year budget deal last summer, the Wall Street Journal reported.

Trump would increase military spending by 0.3 per cent to $US740.5 billion for the fiscal year 2021, which starts on October 21. Spending cuts of $US4.4 trillion over a decade would target $US2 trillion in savings from mandatory spending programs, including cuts of $US130 billion tied to Medicare drug-pricing and $292 billion from safety-net programs, such as food stamps and Medicaid.

The budget assumes the $US1.5 trillion tax-cut package enacted in 2017 and set to expire by 2025 is extended.

The plan would request $US2 billion in new funding for the wall along the US southern border, less than the $US5 billion the administration sought last year.

Will Opera Australia be a lighthouse for change or perpetuate issues in the arts?