The first sonic boom in COLOUR: TV documentary brings to life moment Chuck Yeager broke the sound barrier in 1947… and how test pilot cheated death by turning OFF engines as plane spun out of control six days earlier

On October 14, 1947, a unique, terrifying sound pierced the air above California’s Mojave desert.

US Air Force pilot Chuck Yeager had carried out a feat which some believed to be impossible: he had broken the sound barrier by flying above Mach 1 (767mph), causing a sonic boom.

The brilliant pilot did so in ‘Glamorous Glennis’, the experimental Bell X-1 plane which was named after his wife.

Now, ahead of the anniversary of his famous accomplishment, an upcoming TV documentary sheds further light on how the pilot came extremely close to death when his plane spun out control on a previous test flight.

He was only saved by quick-thinking which saw him turn off his engines to slow himself down and regain control.

Breaking The Sound Barrier, which airs in the UK and US tonight on the Smithsonian Channel, hears from aviation experts and reveals newly-colourised footage of the famous flight.

Yeager, who passed away in December last year, had previously shot down at least 11 enemy aircraft in the Second World War.

His 1947 feat pipped other countries – including the UK – in the race to fly faster than the speed of sound and sparked off the global development of both commercial and military aircraft capable of flying at supersonic speeds.

A little over six years later, the US Navy’s Skyrocket plane reached a new speed of Mach 2 (1,500mph), before Yeager became top dog again by flying at 1,600mph.

And, within less than 20 years of Yeager’s flight, the Concorde supersonic airliner had taken to the skies, ushering in a revolution in commercial transatlantic travel. 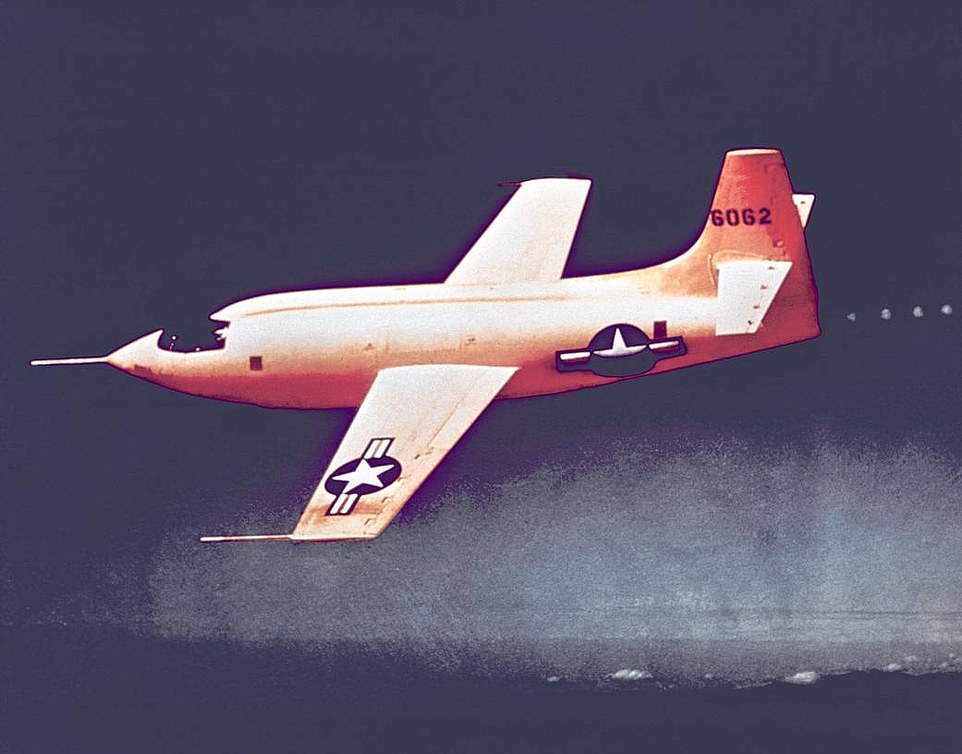 On October 14, 1947, a unique, terrifying sound pierced the air above California’s Mojave desert. US Air Force pilot Chuck Yeager had carried out a feat which some believed to be impossible: he had broken the sound barrier and caused a sonic boom. The brilliant pilot did so in ‘Glamorous Glennis’, the experimental Bell X-1 plane which was named after his wife. Pictured: The plane is seen in footage that has been colourised for TV documentary Breaking The Sound Barrier, which airs in the UK and US tonight at 8pm on the Smithsonian Channel 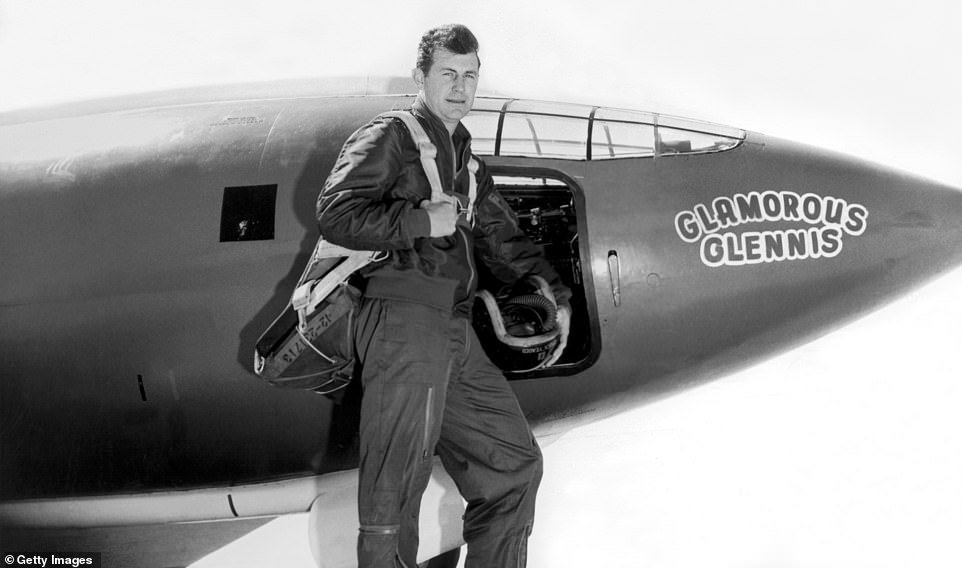 In the year before Yeager broke the sound barrier, a rival British project had nearly succeeded in doing the same.

This unmanned aircraft was flown 35,500 feet above the Atlantic Ocean, west of Land’s End in Cornwall.

Although it was theoretically capable of flying between 800-100mph, the A2 crashed after exploding in mid-air.

Although work continued on the project after the setback, the British Government then cancelled it out of the blue – despite the £100,000 which had already been spent on it.

Insider Don Brown told how he was ‘fuming’ because the team were ’15 months ahead of the Americans’.

Yeager had been selected to take part in the American X-1 project after his heroic war service, which saw him posted to Britain.

He took over in the X-1 from the plane’s second test pilot, Slick Goodlin, who had laid the groundwork for his counterpart by completing 20 powered flights and reaching 0.8mach (614mph).

The X-1’s first pilot, Jack Woolams, had been killed in a crash in another plane in 1946. 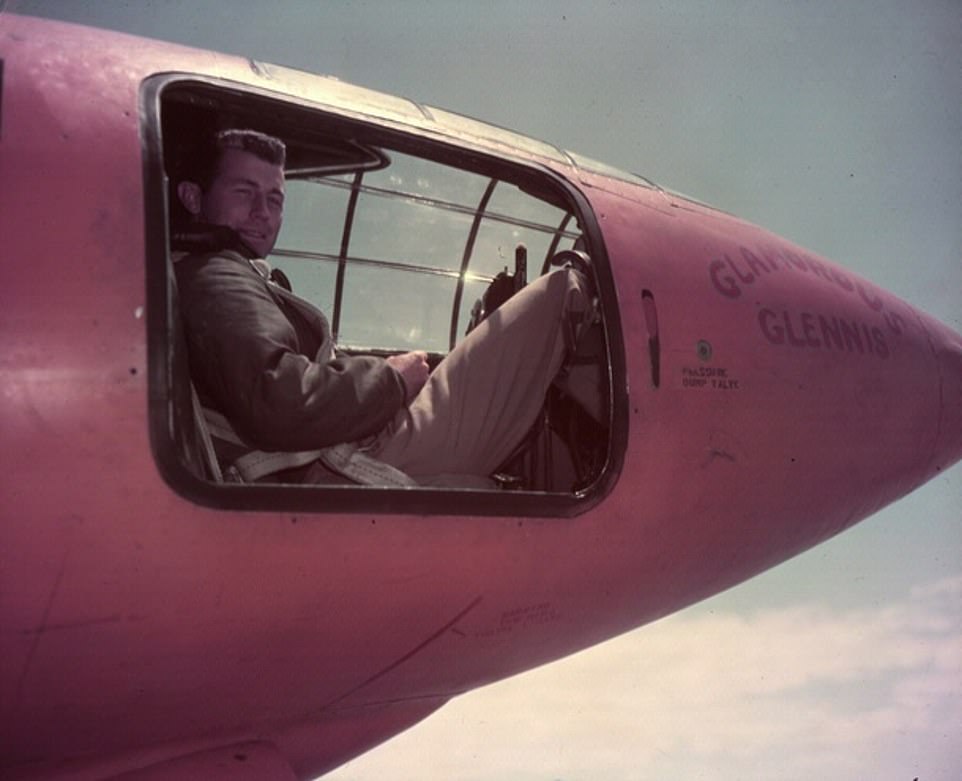 Yeager had been selected to take part in the American X-1 project after his heroic war service, which saw him posted to Britain. Pictured: Yeager sitting in the cockpit of Glamorous Glennis 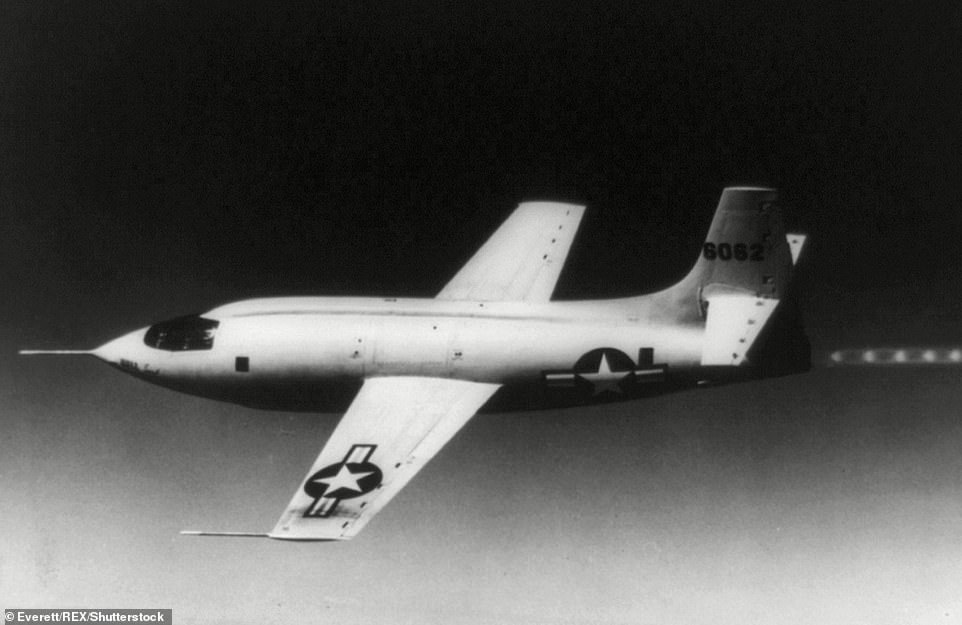 Bell X-1 rocket plane in which Chuck Yeager became the first human to break the sound barrier on October 14, 1947. The facts of the flight remained classified until publicly announced on June 10, 1948. However, details of the flight began leaking to the press in December 1947 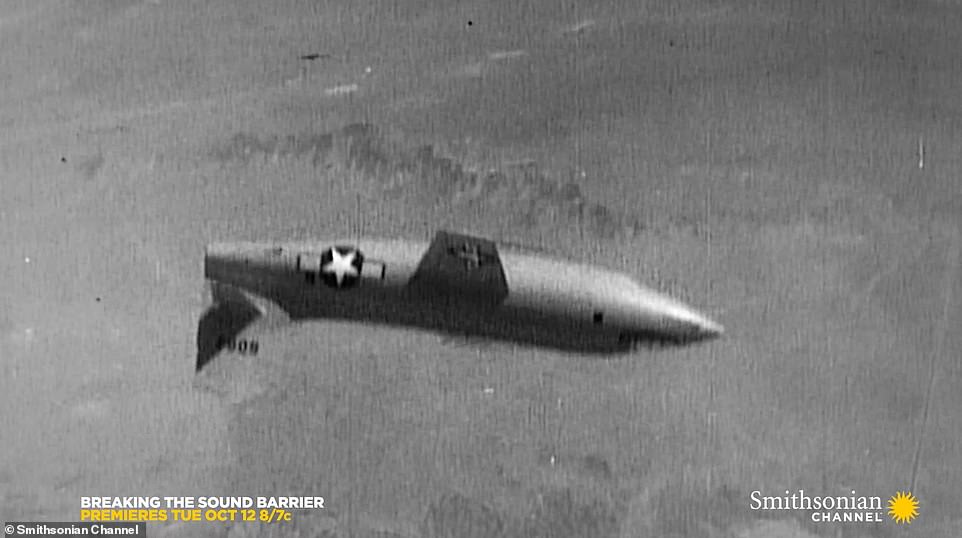 Yeager’s first powered flight in the X-1 on August 29, 1947. After successfully accelerating to speeds of 0.85mach (652mph), the daring pilot carried out a series of unplanned stalls and rolls to try to assess the limit of the aircraft. Above: A scene from the footage shown in the documentary 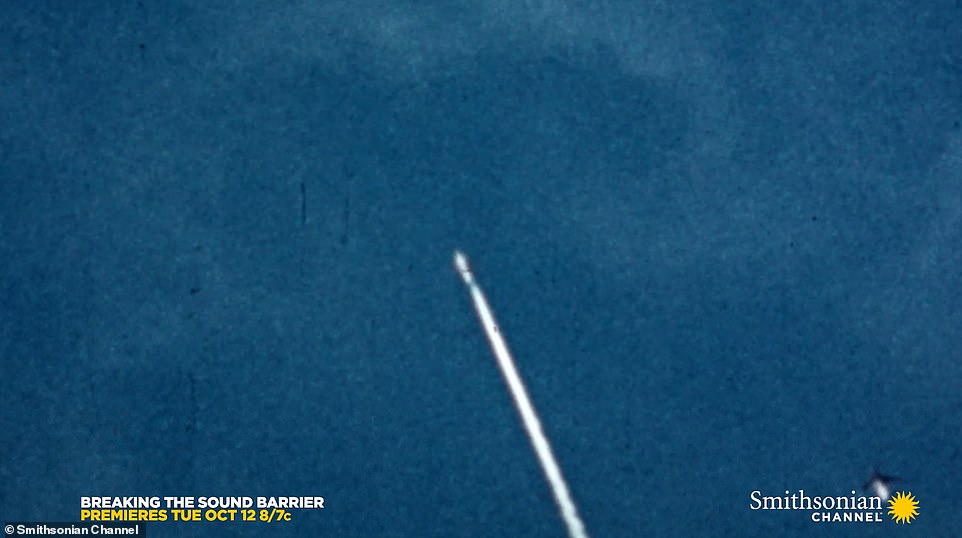 Unlike a jet aircraft, the rocket-powered X-1 used onboard liquid oxygen – instead of oxygen from the atmosphere – to generate thrust. Above: Colourised footage of the X-1 as it looked from the ground

The Air Force team involved in the X-1 project were starkly aware of the risks involved in attempting to reach supersonic speeds.

British test pilot Geoffrey de Havilland Jr was killed in 1946 when the plane he was flying – the de Havilland 108 – broke up mid-flight during a test run.

Speaking in tonight’s show, USAF’s Colonel Randy ‘Laz’ Gordon told how experts at the time were uncertain about what the sound barrier actually was.

‘The understanding of people at the time was that the sound barrier was truly that, a barrier,’ he said.

‘So they knew as they were accelerating that they were going to enter this region of the unknown that we needed to somehow figure out how to break through.’

After successfully accelerating to speeds of 0.85mach (652mph), the daring pilot carried out a series of unplanned stalls and rolls to try to assess the limit of the aircraft.

But when safely back on the ground, he was reprimanded by his superiors for taking unnecessary risks.

Unlike a jet aircraft, the rocket-powered X-1 used onboard liquid oxygen – instead of oxygen from the atmosphere – to generate thrust.

It meant that Yeager was flying a machine that was highly explosive.

On October 8, during his seventh flight in the X-1, Yeager had a brush with death that illustrated just how dangerous the project was. 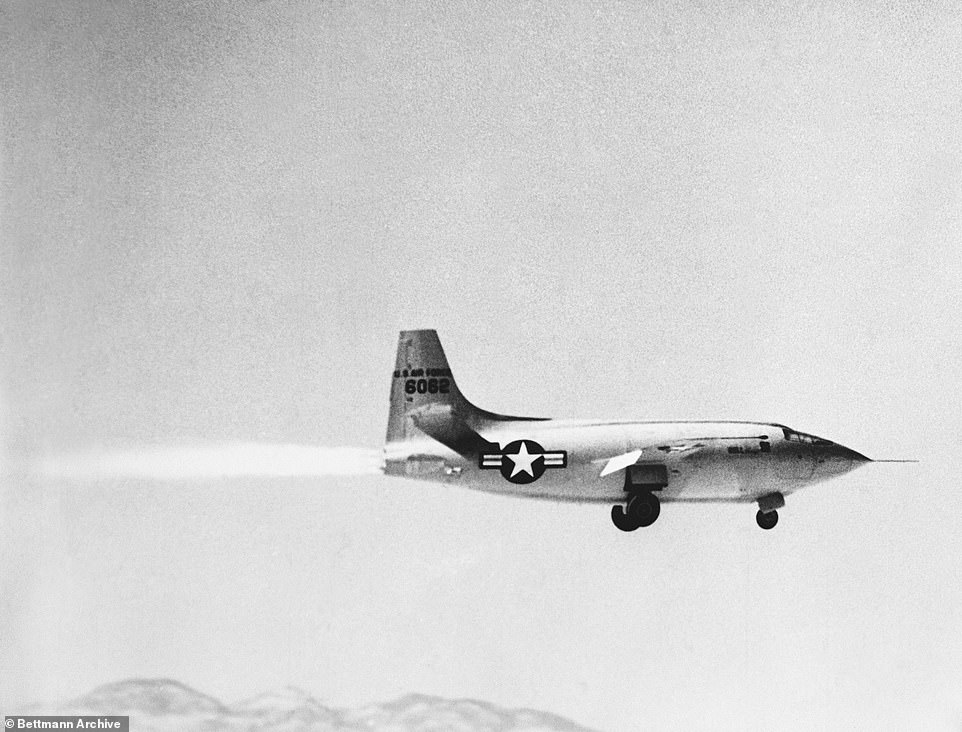 Yeager later flew the X-1 from take-off, proving that it could reach supersonic speeds from a ground start. Pictured: The plane in flight in 1949, after taking off from the ground 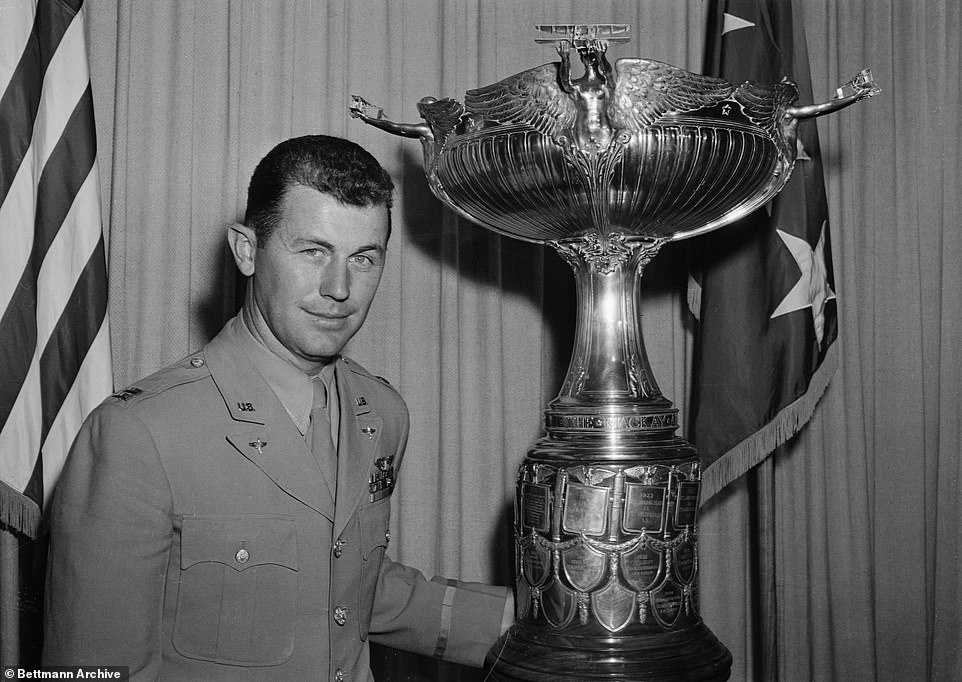 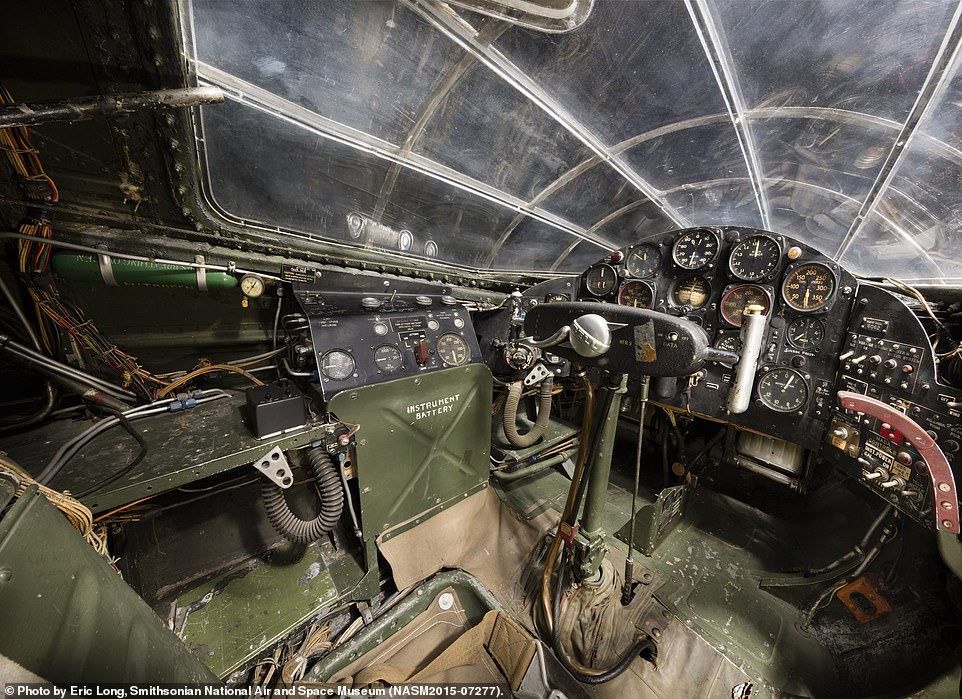 Two days before his most famous flight, the pilot had broken three of his ribs while riding a horse and was worried he would not be able to climb into the cockpit (pictured)

After he and his aircraft were flown to an altitude of 12,000feet by a B-29 bomber, the pilot was lowered into the plane on a plywood platform.

After emerging from the B-29, Yeager fired up the X-1’s engine and quickly flew to 40,000 feet. Checking his speed, Yeager then realised he had hit his target for that flight of 0.94mach (721mph).

However, an unexpected shockwave caused by a pocket of supersonic air colliding with slower air then caused the pilot to lose control of his aircraft.

Unable to control the pitch (the up and down movement), Yeager thought his controls were broken and was in a situation which had killed previous pilots because the plane was now liable to spin or stall out of control.

However, Colonel Grant tells in the programme how the pilot came up with a ‘brilliant’ solution. He shut down the plane’s engine, slowing the aircraft enough for the controls to begin working again.

Once on the ground, Yeager’s team worked to diagnose the problem.

They discovered that the shockwave had formed on the plane’s horizontal tail, creating an air flow which negated the movement of the plane’s elevator – which controlled its pitch. 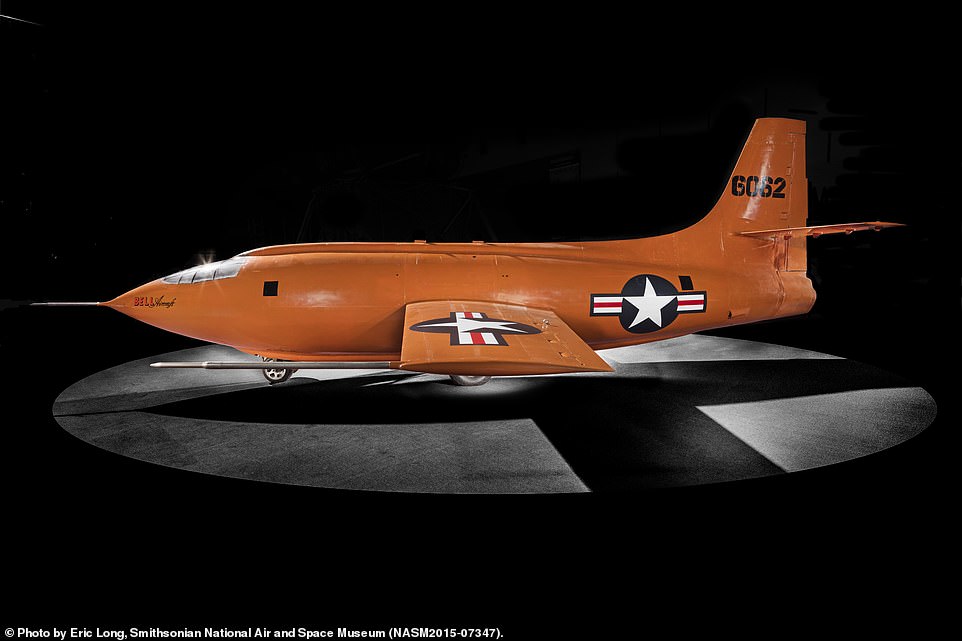 Bell X-1 is now on permanent display at the Smithsonian National Air and Space Museum in Washington, D.C. 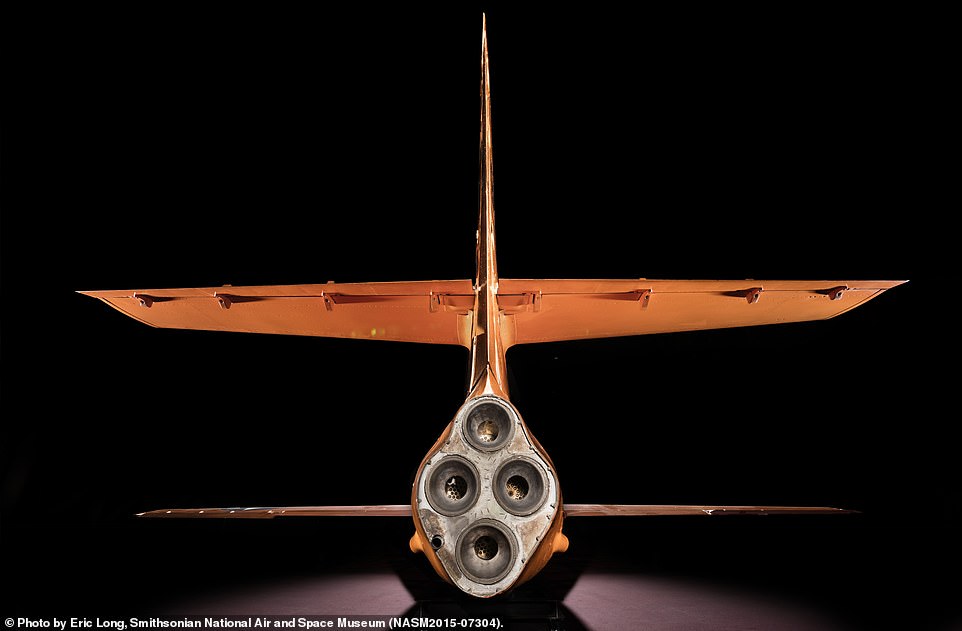 The plane was rocket-powered, meaning that whilst it was capable of reaching incredibly high speeds, it was also filled with highly flammable liquid oxygen

By using the adjustable horizontal tail when nearing the speed of sound (Mach 1), the engineers said Yeager would be able to re-establish control of his plane.

Then on October 14, Yeager had recovered from his ordeal and was set for an attempt at breaking the sound barrier.

However, two days before, the pilot had broken three of his ribs while riding a horse and was worried he would not be able to climb into his plane.

Fortunately, he was able to withstand the pain and successfully set himself up in the X-1’s cockpit and emerged from the belly of the B-29.

When he neared 0.9mach, the pilot engaged the horizontal stabliser and saw the Mach meter then go haywire, looking as though it was broken.

Then, what is described in the programme as ‘two sharp blasts’ then rolled across the desert. 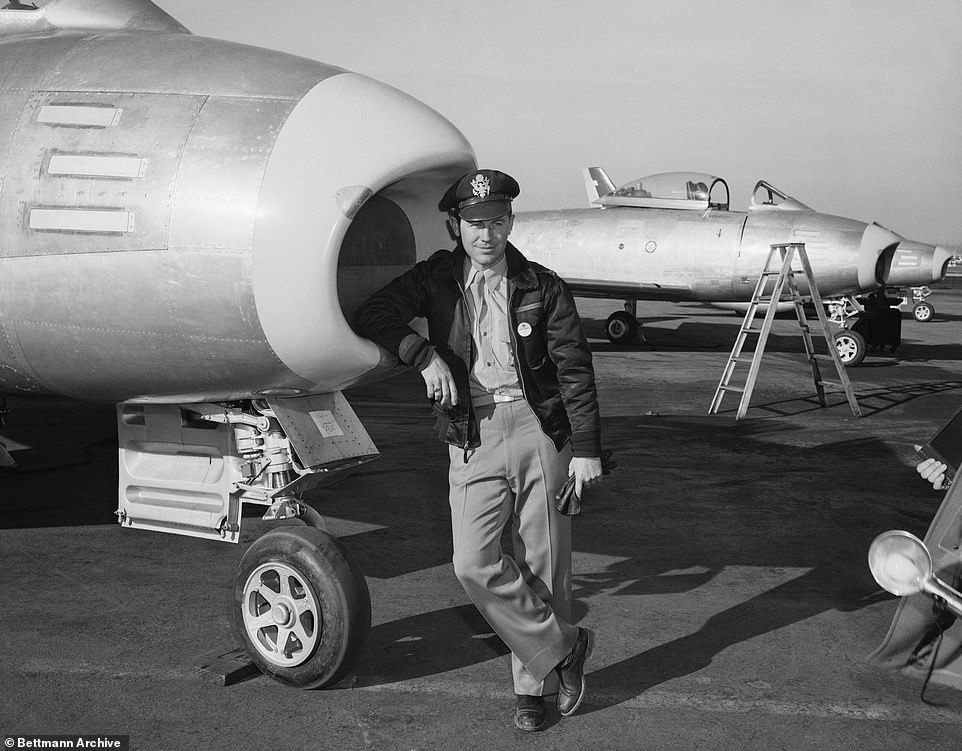 Yeager was nearly killed flying the Bell X-1, but put his enormous skill and experience to good use to save himself. Pictured: The pilot poses next to a plane in 1949 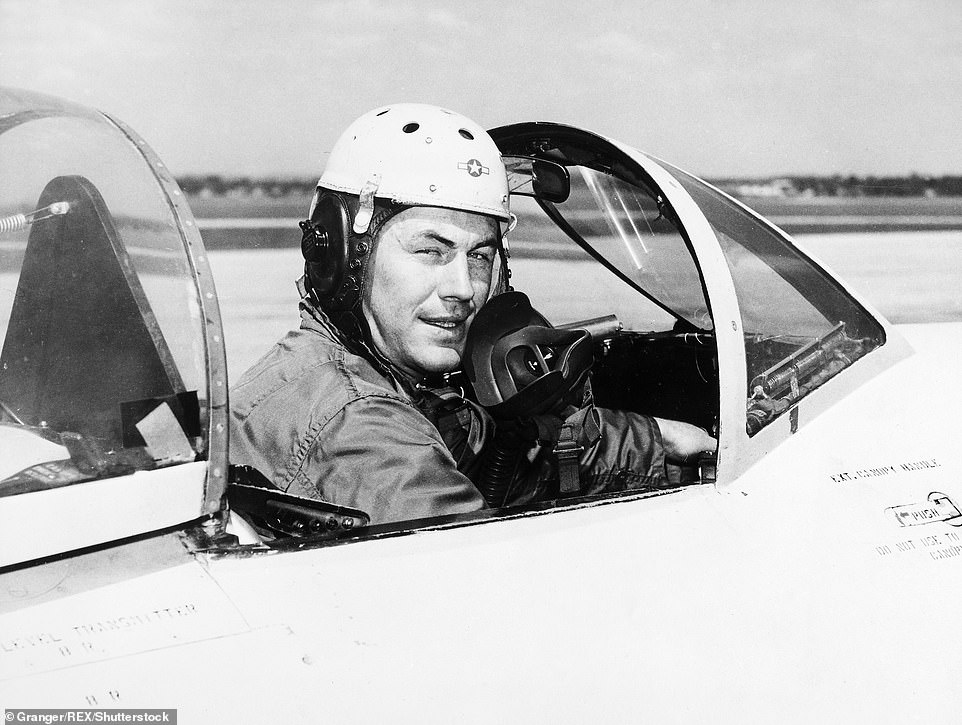 Yeager had been stationed in the UK during his time as a fighter pilot in the Second World War. Pictured: Yeager in 1948 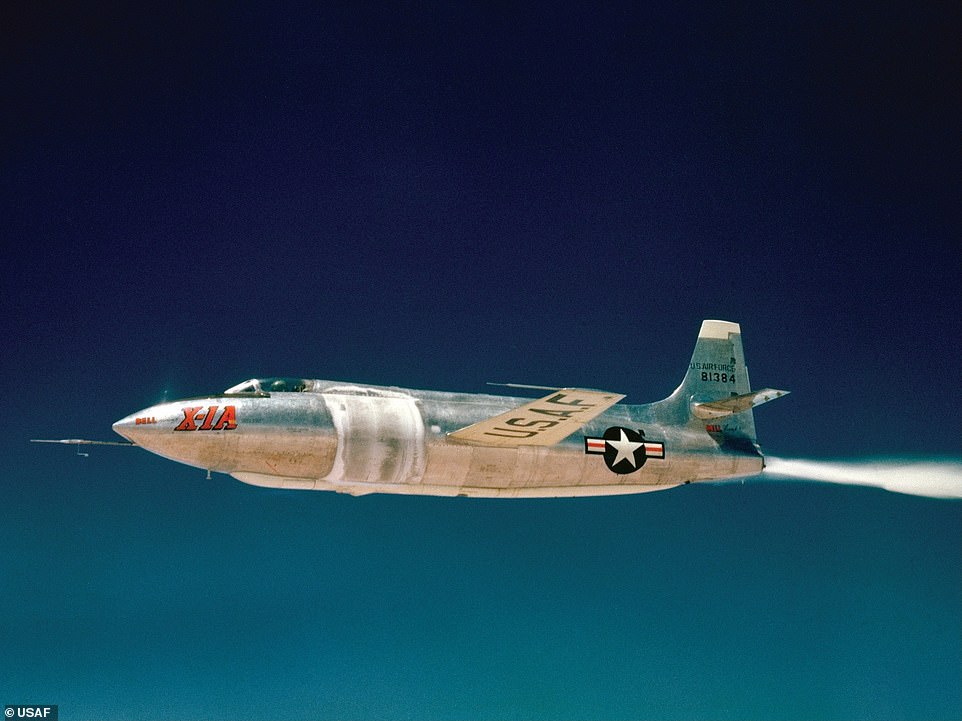 After the original X-1 was retired, further models – the X-1 A, B, C and D – were produced to further advance knowledge of supersonic flight. Pictured: The X-1A in flight

As it passed Mach 1, the X-1 had overtaken the sound waves in front of it, whilst continuously generating new ones as it flew forwards.

These sound waves were then forced together, forming a trailing shockwave and producing the thunderous noise that Yeager had heard. It was the first sonic boom ever made by a pilot.

Colonel Grant said: ‘For Yeager after all the worry about controlling the X-1, getting through the buffeting in the barrier, it is perfectly smooth.

‘And he realises, there wasn’t a physical barrier, it was a barrier in our understanding of how the shockwaves affected an aircraft.

‘They have solved those problems and the mysterious barrier has vanished.’

Fourteen minutes later, Yeager landed back on the ground.

Whilst news of the record-breaking feat leaked to the press in December 1947, its validity was soon questioned by rival US Navy pilots, who said it should not count because the X-1 was dropped from the B-29 rather than taking off. 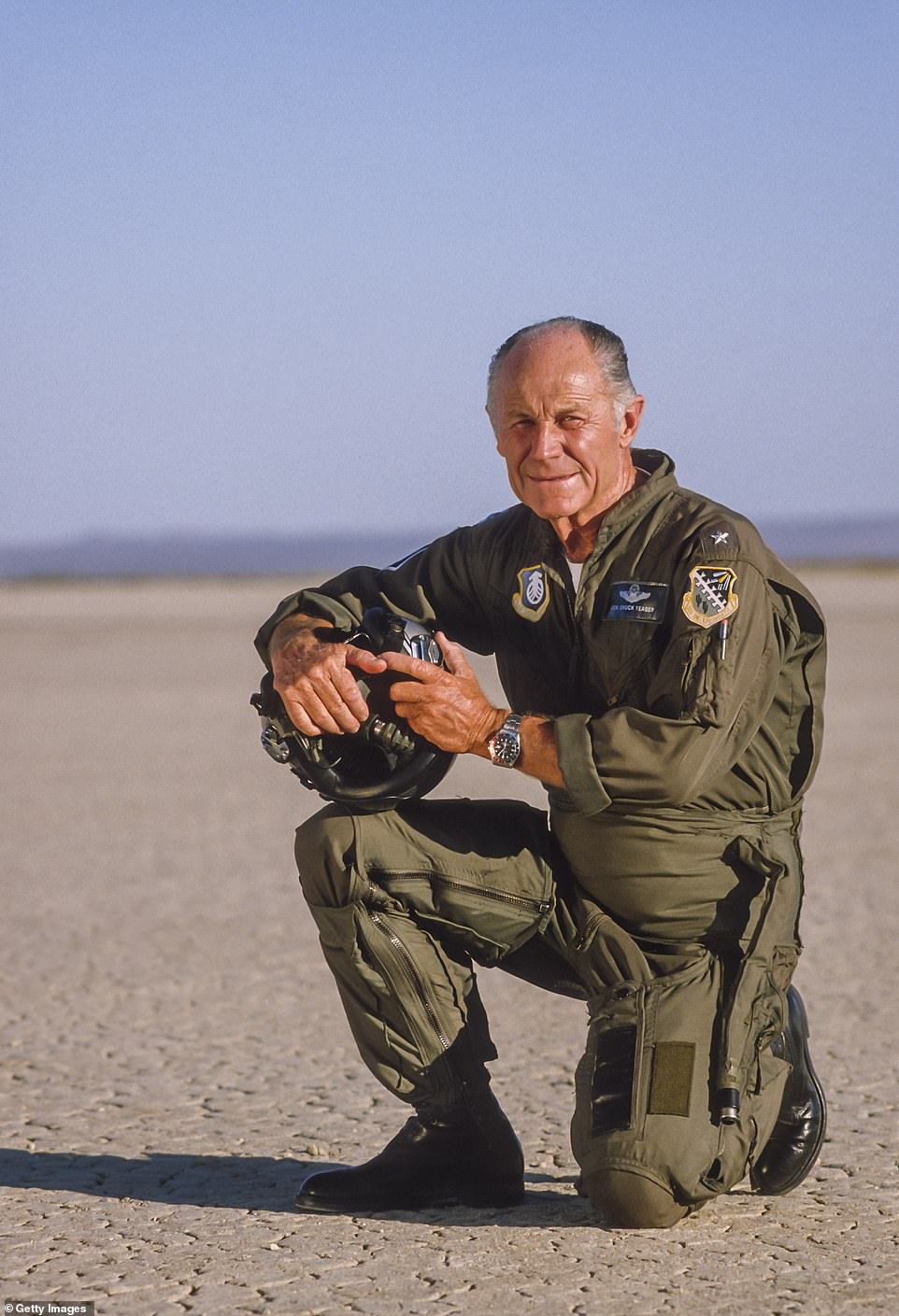 Yeager finally retired from the Air Force in 1975 and moved to a ranch in Cedar Ridge, Northern California. Above: Yeager wears full flying gear as he poses for a photograph at Edwards Air Force Base in 1986

To prove that the X-1 could rise to the challenge, Yeager then attempted a ground take-off on January 5, 1949.

Less than 80 seconds after climbing above 23,000 feet, the pilot went supersonic for the second time. It was the first supersonic flight achieved from a ground take-off.

After reaching the speed, the plane then lost lift and began to roll in a phenomenon known as intertia coupling.

Yeager dropped 4,000 feet in less than a minute and, at 30,000 feet, utilised the denser air at that altitude to flip the X-1A into a two-dimensional spin before regaining full control.

Expert Richard P Hallion says in tonight’s show: ‘The fact that he recovered the aircraft was a tremendous tribute both to the structural strength of the airplane but also to his phenomenal flying abilities.’

He was awarded the Distinguished Service Medal in 1954 for the feat.

Yeager finally retired from the Air Force in 1975 and moved to a ranch in Cedar Ridge, Northern California.

Trump went to COVID school but learnt the wrong lessons

‘She took them into her home’: Leifer chaplain knew alleged victims