TWO babies developed cancer after inhaling the diseased cells from their mums during childbirth, scientists claim.

In each case, the mothers had cervical cancer during pregnancy, but this was not discovered until afterwards. 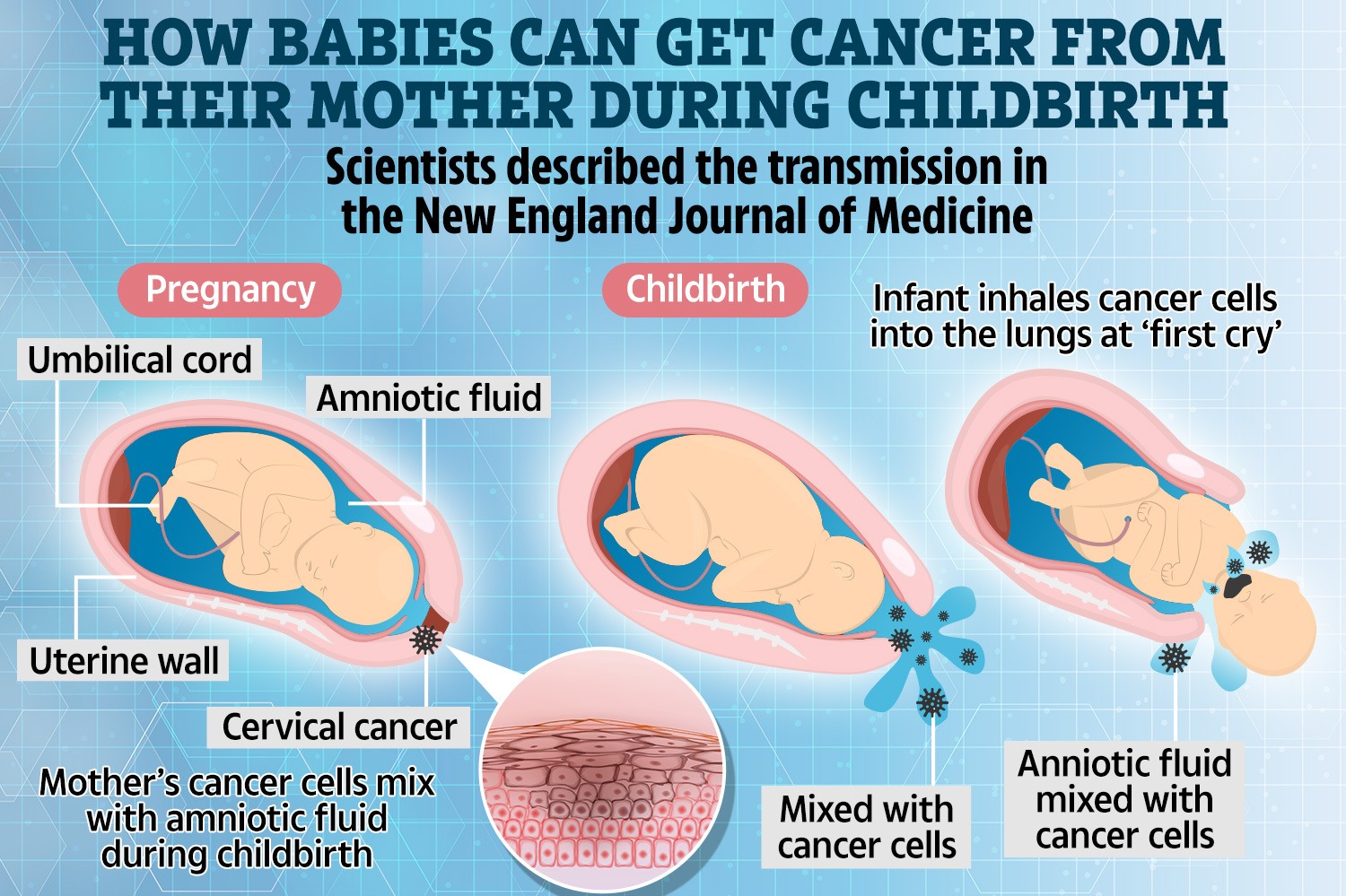 Doctors in Japan described how a mum's cancerous cells can mix with the amniotic fluid that holds her baby in the womb.

When her baby is born, the fluid is inhaled by the baby before its first cry.

Writing about the cases in the New England Journal of Medicine, the scientists said the pattern of their tumour growth over the next few years of the life “suggested that the tumours arose from mother-to-infant vaginal transmission through aspiration of tumour-contaminated vaginal fluids during birth”.

A total of 20 children have "caught" cancer from their mum this way, according to records, and eight of the infants are known to have survived.

In other cases, it is understood cancerous cells reached the baby through the placenta.

Transmission of cancer from a woman to her unborn child is “extremely rare”, the paper said.

Around one in every 1,000 expecting women have cancer. And one baby per every 500,000 mums who have cancer will catch the disease before or during birth.

But despite the rarity, the cases further highlight the importance of HPV vaccination.

The HPV vaccine, given to all schoolchildren in England, prevents development of various cancers.

But the women in this report, from Japan, are understood to have not received the vaccine as children, therefore developing cervical cancer.

Cervical cancer is diagnosed in around 3,200 women in the UK every year.

A baby of 23 months old was taken into hospital with a cough that had lasted for two weeks.

His mum had been diagnosed with cervical cancer three months after giving birth.

CT scans revealed multiple masses in the young boy’s lungs which were confirmed to be cancerous.

He was followed up for a year, by which point he needed treatment.

The child went through chemotherapy and was given various other drugs. He was also involved in a clinical trial to help shrink the tumours, and had part of his lung surgically removed.

Although he recovered by the age of four after extensive treatment, his mother’s disease sadly progressed.

The 35-year-old’s cancer spread to her lung, liver and bones before her death.

What is cervical cancer and is it preventable?

Cervical cancer develops in a woman's cervix – the entrance to the womb from the vagina.

It mainly affects sexually active women aged between 30 and 45.

The best way to protect yourself from cervical cancer is by attending cervical screening (previously known as a "smear test") when invited.

The NHS Cervical Screening Programme invites all women from the age of 25 to 64 to attend cervical screening.

Almost all cases of cervical cancer are caused by HPV, a very common virus that can be passed on through any type of sexual contact.

Girls and boys aged 12 to 13 years are offered the HPV vaccine as part of the NHS vaccination programme to protect them from various cancers.

Two strains, HPV 16 and HPV 18, are known to be responsible for most cases of cervical cancer.

They do not have any symptoms, so women will not realise they have it.

And cervical cancer does not have symptoms in the early stages.

The signs of cervical cancer are

You can find out more on symptoms from the NHS website

The second child, a six-year-old boy, was discovered to have a tumour in his lung after suffering chest pains.

The tumour had been growing very slowly and silently, but the doctors did not specify for how long.

A cervical tumour had been discovered in his mum during pregnancy. But it was wrongly considered “stable”.

But she died two years after the surgery.

Her son survived – he was given dozens of drugs over the course of the next few weeks, chemotherapy and surgical removal of part of his lung.

More than a year after his operation, he was free from disease.

The scientists wrote: “We did not suspect maternal transmission of the cancer when the child received a diagnosis at six years of age.”

But in both cases, when doctors analysed tissues from the tumours in both the mum and child, they found genetic similarities.

It indicated the tumours in the children had the same genetic makeup as those in womens’ cervix, which could not have been inherited.

HPV is a group of common viruses that are passed through sexual contact.

For example, high risk types of HPV can be found in more than 99 per cent of cervical cancers, according to the NHS.

In England, girls and boys aged 12 to 13 years are routinely offered the jab – in two doses – to protect them from cancers caused by HPV.

'Something has to give,' EU's Barnier tells Brexit Britain