Union leaders today blasted ‘insulting and cowardly attacks’ on civil servants after they suggested mandarins who want to continue to work from home should have their pay docked.

The FDA general secretary Dave Penman has demanded reassurances from politicians that it was not Government policy after anonymous briefings yesterday.

One minister suggested to the Mail cutting pay for those who want to continue to work from home, while another told the Times darkly that their promotional opportunities might be hampered.

Downing Street yesterday sided with civil servants, saying there was no plan to cut pay and that civil servants were gradually returning to their offices as planned.

They accepted that flexible working and splitting time between offices and home working would continue.

In a letter to Cabinet Office minister Michael Gove last night, Mr Penman said staff had played a key role in fighting Covid while having to also navigate the upheaval of the pandemic.

‘They have done so willingly, as committed public servants, and in doing so have pioneered new ways of working that will inevitably change the world of work for good,’ he said.

‘Yet those same civil servants have woken up today to threats from anonymous cabinet ministers to cut their pay and a series of denigrating remarks about their commitment and effectiveness whilst working from home.

‘I cannot impress upon you enough the upset and anger these comments have caused among civil servants.

These insulting and cowardly attacks require a response from Government, and I am asking you, as Minister for the Cabinet Office, to assure civil servants that these views do not represent the views of this government, their employer.’ 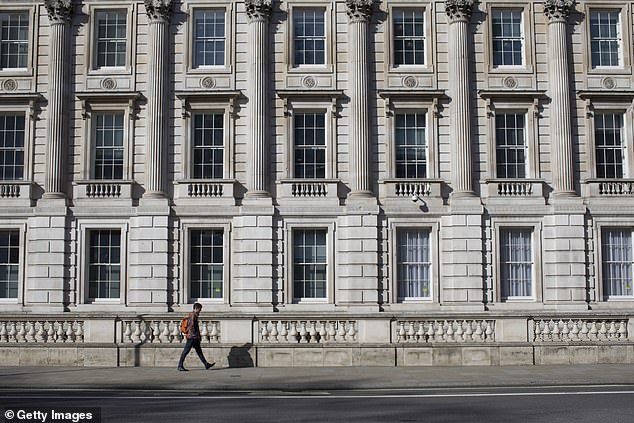 One minister suggested to the Mail cuttings pay for those who want to continue to work from home, while another told the Times darkly that their promotional opportunities might be hampered. 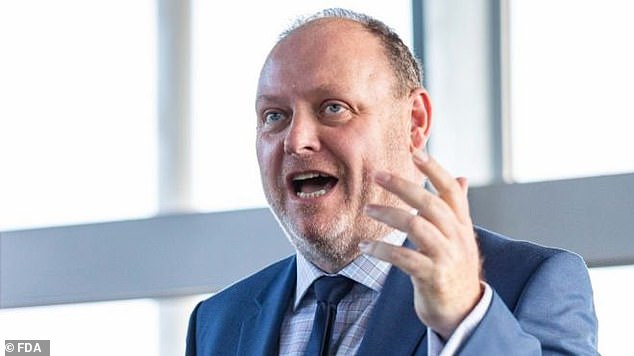 The FDA general secretary Dave Penman has demanded reassurances from politicians that it was not Government policy after the anonymous briefings yesterday. 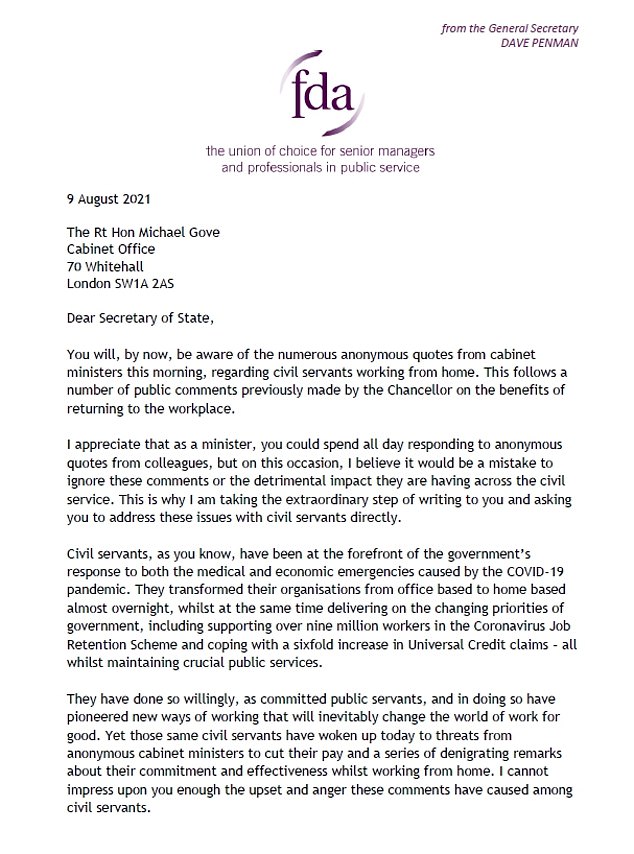 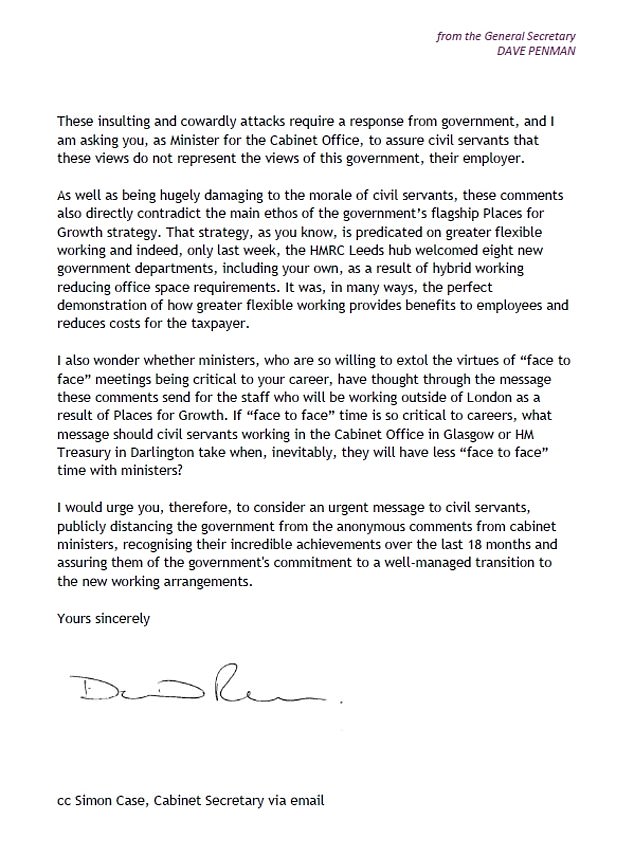 Downing Street yesterday refused to condemn civil servants resisting a return to Whitehall today amid calls for them to face a pay cut if they want to continue to work from home.

No10 insisted that the Civil Service was following its plan for a gradual return to work post lockdown amid concern at the economic impact of a fall in commuting in major towns and cities.

Unnamed senior ministers last night suggested those who refuse to return to the office should be paid less than those back at their desks, or passed over for promotion.

It came as the Department of Health and Social Care reportedly abandoned plans for its civil servants to be back at their desks between four and eight days a month from September.

Asked if it was right to take such punitive action, the Prime Minister’s official spokesman today told reporters: ‘No. We have no plans for that approach.’

He added that the PM had made clear ‘the benefits of office working’ but it was up to individual departments to set their own targets, adding: ‘Flexible working is rightly here to stay’.

Business Secretary Kwasi Kwarteng also took a much more conciliatory tone today, warning against Government ‘diktats’ and quotas and saying deals should be hammered out between firms and their workers.

He said he would ‘never’ advocate docking pay and regarding his own department’s staff he said that while he would be ‘encouraging them to come in … of course there will be a degree of flexibility.’

His comments came as unions lashed out at blunt attempts to coerce civil servants back to Whitehall, amid fears for city centre economies stripped of commuter cash.

The Government has recommended employees make a ‘gradual return’ to offices over the summer after many have spent well over a year working from home because of the pandemic.

But a senior minister told the Mail it was unfair that those still at home should get the same benefits as those commuting in.

Another hinted to the Times that promotion could be affected, saying: ‘People will find that those who get on in life are those who turn up to work.’ They also spoke of a ‘big push’ to get civil servants back to Whitehall at least three days per week.

But the comments were described as ‘insulting’ by a civil service union chief, who said ministers should focus on whether public services are being delivered, rather than where civil servants are sitting.

Nicola Sturgeon weighed in to the row today, saying there would be no pressure on Scottish Government workers to rush back to the office full time, saying a ‘work-life balance’ was important.