Unjabbed Brits could be BANNED from travelling to the EU next summer: Bloc’s new proposals rule out entry unless you’ve been vaccinated within previous nine months in battle to contain Covid

Britons face banned from travelling into the EU unless they are fully vaccinated against Covid under new rules being hammered out in Brussels today.

Under the plans, which would affect any tourist from outside the bloc, the ‘white list’ of approved countries would be scrapped in favour of making travel dependent on the vaccination status of the traveller.

Those fully jabbed with an EU-approved vaccine – which includes AstraZeneca and Pfizer – would be allowed to travel freely, provided their last dose was within the last nine months. Those with ‘expired’ jabs would need a booster shot.

Children, those who have recovered from the virus, people travelling for essential reasons and those jabbed with a WHO-approved vaccine would also be allowed but may require a pre-departure PCR test, Bloomberg reports.

The rules are likely to be phased in, and take full in effect by March. The same rules would then be rolled out to EU citizens travelling within the bloc from next summer.

Detailed plans are set to be published later today, and it will then be up to each member state whether to implement them.

It comes as the continent tries to control a rising wave of Covid infections, with leaders targeting the unvaccinated for the harshest measures. 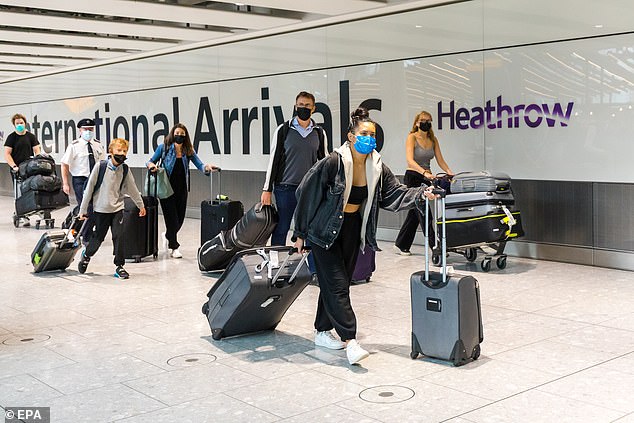 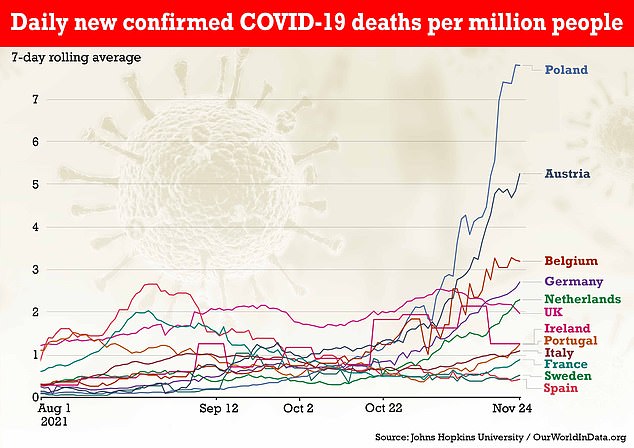 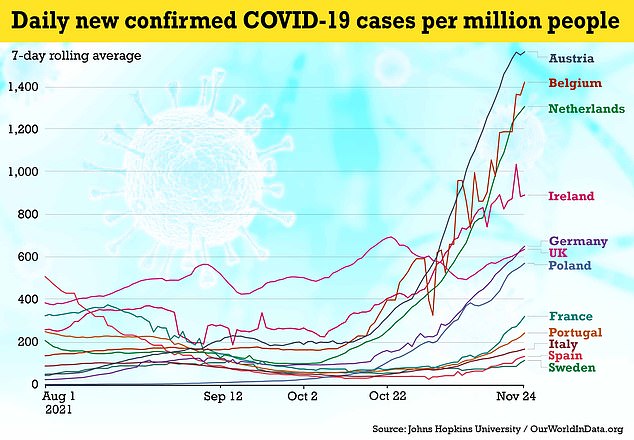 Covid cases are hitting all-time highs in many countries in Europe, as leaders rush to reimpose lockdowns and target the unvaccinated with the harshest measures

The European Commission wants to harmonise rules across the 27 EU nations to allow free movement, a cornerstone of the European Union, but is facing new restrictions as cases break records amid flagging vaccination drives.

EU governments, which will need to approve the Commission recommendation, kicked off debate on the topic on Tuesday.

Greece has proposed people should in future be able to travel freely if they have received a dose in the past six months.

Accepting that immunity wanes over time, the executive Commission is proposing that people should be considered covered if their most recent dose was within the last nine months, an EU official told Reuters.

Given most EU residents who were vaccinated received their final doses in the second and third quarters of 2021, their coverage would mostly expire by the middle of next year.

The European Centre for Disease Prevention and Control (ECDC) on Wednesday recommended vaccine boosters for all adults, with priority for those over 40, in a major shift from its previous guidance which suggested extra doses for older people and those with weakened immune systems.

EU coordination on COVID passes, showing if a holder is fully vaccinated or has a recent negative test or recovery from infection, has allowed an easing of curbs on cross-border travel.

The passes, typically viewed on mobile devices, are issued by individual countries, but are recognised across the bloc. They are now increasingly being deployed in many EU countries for access to indoor areas such as restaurants or theatres.

As well as passing the 100,000 deaths mark, Germany also set a new one-day record for Covid cases with almost 76,000 infections logged in 24 hours.

Hospitals are now warning that intensive care beds are running out, with almost 4,000 already occupied by COVID-19 patients. Some hospitals in the country’s south and east have begun transferring patients to other regions.

The surge has prompted Germany’s government-in-waiting to announce the creation of a new permanent expert group to advise officials on how to tackle the pandemic.

The current government has urged people who were vaccinated more than six months ago to get boosters, while pressuring those who haven’t been inoculated to get their first shot.

Many regional leaders have already begun tightening curbs on the unvaccinated in order to drive rates up.

Officials say 68 per cent of Germany’s 83 million inhabitants are fully vaccinated, slightly above the European average of 67 per cent but far below the 75 per cent the government had targeted to prevent future waves of infection.

In Italy, which has vaccinated around 73 per cent of its population, new rules were announced Wednesday which tightens the country’s ‘green pass’ system that allows people entry into indoor spaces.

Under the old system, people had to show evidence of Covid vaccination, a negative test, or previous infection to be granted entry to places such as bars, restaurants, nightclubs and cinemas.

But under the new rules, only evidence of vaccination or previous infection will be accepted. Workplaces will be exempt from the rules, but staff will have to test negative once every 48 hours at a cost of £12.60 per test.

Prime Minister Mario Draghi said the measures were necessary to ‘save Christmas’ and prevent a total lockdown of the country.

Slovaks are now banned from leaving home except for essential reason such as to buy food, travel to work or school, or for medical appointments.

Daily exercise and dog walking is allowed within 500 yards of home.

Businesses have been told staff must work from home where possible, with unvaccinated employees who cannot stay home ordered to regular test for the virus.

Schoolchildren will also be tested on a regular basis, and will have to wear masks while in school buildings.

Heger called the measures ‘inevitable’ and said its success ‘will depend on every single citizen.’

Elsewhere, the Dutch Hospital Association for Critical Care said some emergency treatments such as chemotherapy and organ transplants are being cancelled or delayed to free up intensive care beds for Covid patients.

The health minister has been asked to activate powers whereby treatments that typically require an overnight stay can be cancelled so that more beds can be emptied, amid warnings that hospitals will be full in a week if nothing is done. 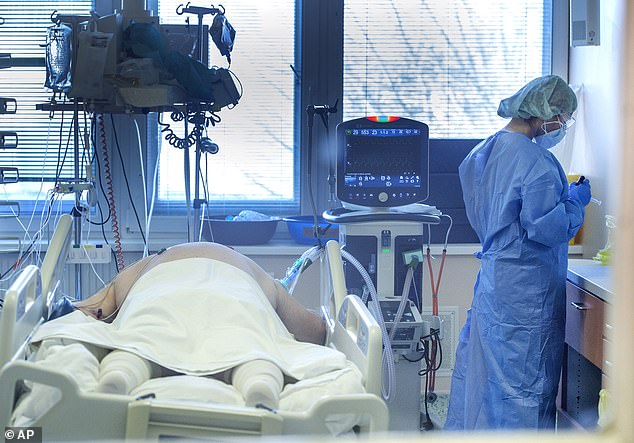 The new measures are aimed at preventing future waves of Covid, with Slovakia (pictured) going back into full lockdown today as cases soared

After ending most social distancing measures in late September, the Dutch government this month reintroduced mask-wearing and reimposed a partial lockdown, with bars and restaurants closing at 8 p.m.

Plans to restrict access to many public places to people who have been vaccinated or have recently recovered from COVID-19 prompted three nights of rioting from last Friday, with more than 170 people were arrested across the country.

The massive spike in COVID-19 cases in recent weeks is threatening the European Union’s recovery from the deep economic slump caused by last year’s onset of the pandemic, the bloc’s economy chief said Wednesday.

And medical experts warned that the public health situation could get much worse.

Only two weeks ago the EU executive raised its growth forecast for an economy bouncing back from the worst of the pandemic.

But EU Economy Commissioner Paolo Gentiloni said Wednesday the upbeat picture was now in doubt again amid rising infections and with restrictions being reintroduced in a growing number of member states.

The fear is that the fall forecast for 5% growth this year in the 19-nation eurozone could still be hurt by the end-of-year virus crisis.

‘Our only message is: Take the situation very seriously,’ Gentiloni said, ‘but without thinking that the economic impact will be the same one as one year ago.’

Medical experts warned of more hardship ahead, and called for urgent measures that could impact crucial sectors like the restaurant, bar and tourism industries, already badly hit by the virus last year. 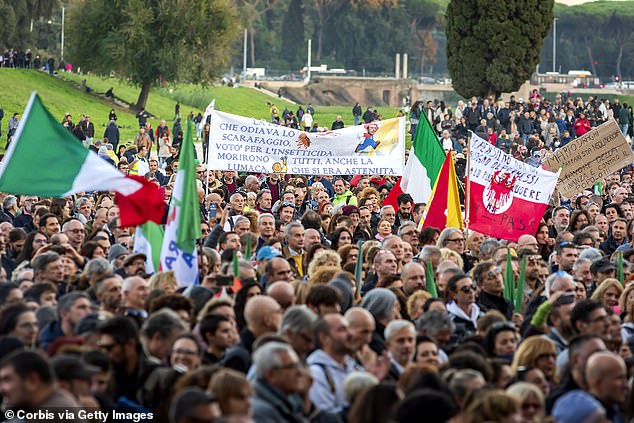 New lockdowns have prompted protests and riots in Europe, with Italy the latest to impose restrictions on the unvaccinated today 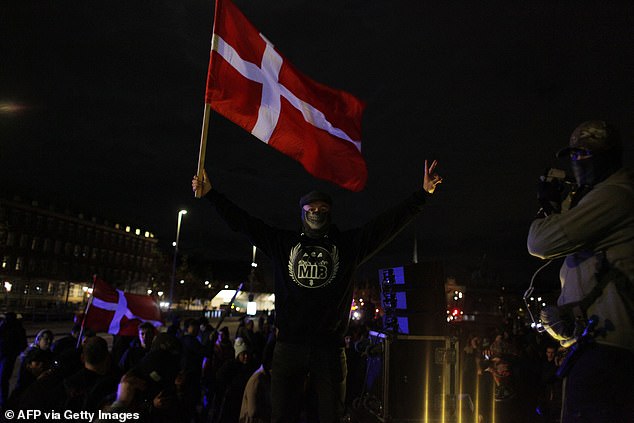 Denmark has suggested bringing back mandatory facemasks, despite the country facing protests of its own in recent weeks

The European Center for Disease Prevention and Control said in a report Wednesday that the burden from the highly contagious delta variant first detected in India ‘is expected to be very high in December and January,’ unless drastic government action in taken and vaccinations tick further upward.

It all goes against initial expectations for the holiday season when it was thought that Europeans unburdened by COVID-19 restrictions would dip into their forced savings of the past year and spend, giving the economy a major shot in the arm.

Now, the ECDC warned, ‘the end-of-year festive season is traditionally associated with activities such as social gatherings, shopping and travelling, which pose significant additional risks for intensified transmission of Delta.’

ECDC Director Andrea Ammon spoke of health systems already being overwhelmed in some EU nations, and others being close to it. ‘We have to take it now really serious in the sense that measures have to be applied in order to reduce transmission.’

In the past though, this has meant lockdowns and wholesale closures of businesses that were responsible for the unprecedented economic slump.

Ammon was addressing everything from less intrusive measures such as mandatory mask wearing or remote work to lockdowns.

‘We still have some time until Christmas,’ Ammon said. ‘But if the situation doesn’t get better, it might mean that these measures should be taken over Christmas as well.’