Washington DC: US President Joe Biden’s top law enforcement official has vowed to hold accountable anyone “at any level” involved in last year’s Capitol attack, regardless of whether they were at the siege or involved in its planning.

One year after the January 6 riot by supporters of former president Donald Trump, Attorney-General Merrick Garland has given his strongest indication yet that his Department of Justice investigation will target perpetrators higher up the chain than it has so far, potentially reaching people in Trump’s orbit or the former president himself. 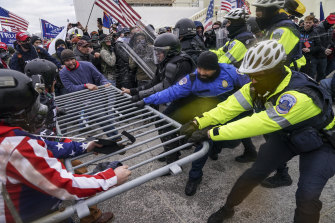 Four people died on the day of the riot, and one Capitol police officer died the day after defending Congress.Credit:AP

“The Justice Department remains committed to holding all January 6th perpetrators, at any level, accountable under law – whether they were present that day or were otherwise criminally responsible for the assault on our democracy,” Mr Garland in a speech to mark the anniversary of the event.

“There cannot be different rules for the powerful and the powerless.”

Garland’s comments come after he faced mounting pressure to be more vocal about the Capitol riot, and to sharpen his focus on Trump and his associates for their actions in the lead up to January 6.

But in a staunch defence on Wednesday (Thursday AEST) he said the investigation was “one of the largest, most complex, and more resource intensive” in US history, and promised that “the actions we have taken thus far will not be our last”. 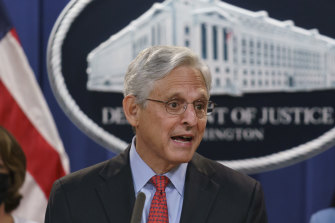 To date, 725 people have been charged for their roles in the Capitol attack, with some of the more high-profile perpetrators including members of the Proud Boys, the Three Percenters and the Oath Keepers – far-right extremist groups that were among the key backers of Trump’s 2020 presidential campaign.

Of those defendants, about 165 have pleaded guilty and at least 70 have been sentenced, with charges including disorderly conduct and conspiracy, to assaulting police.

What’s more, Garland said today, more than 5000 subpoenas had been issued, about 2000 devices seized and about 20,000 hours of video footage searched through.

“We understand that there are questions about how long the investigation will take, and about what exactly we are doing,” he said.

“Our answer is and will continue to be…. as long as it takes and whatever it takes for justice to be done consistent with a fact of the law.”

On January 6, 2021, Trump supporters stormed the US Capitol building after being told by the former president to “fight like hell” to stop Biden’s election from being certified by Congress.

Five people died during the event, including a QAnon supporter who was shot dead by an officer as she attempted to make her way through a smashed window, and about 150 police officers were injured.

On the anniversary of the day(Friday AEDT), Biden and Democrats will commemorate with a series of events tomorrow, including prayer vigils and speeches.

Trump has consistently rejected suggestions that he was responsible for the attack and has continued to push his false claim of a “stolen election” – a claim that polls suggest millions of Americans genuinely believe.

However, a select House committee separately probing the event is examining not only the president’s role but that of his allies, including former chief of staff Mark Meadows, Congressman Jim Jordan, and former Texas governor Rick Perry.

The probe had another major development yesterday, releasing a series of texts suggesting that high-profile Fox host Sean Hannity “had advance knowledge regarding President Trump’s and his legal team’s planning for January 6th”.

Among them was a January 5 text from Hannity saying “I’m very worried about the next 48 hours” as well as a December 31 text to Meadows saying: “I do NOT see January 6 happening the way [Trump] is being told.”

In his speech, Garland described the Capitol siege as an “unprecedented attack on our democracy”.

“We will defend our democratic institutions from attack. We will protect those who serve the public from violence and threats of violence,” he said. “We will protect the cornerstone of our democracy: the right of every eligible citizen to cast a vote that counts.”