Washington: Two competing measures to end the partial US government shutdown have fallen short in the Senate as lawmakers explore an option to end a month-long impasse with the White House and fund government operations for three weeks while talks continue.

A bill backed by Republican President Donald Trump to end the shutdown by funding the wall he wants to build on the US-Mexico border and a separate bill supported by Democrats to reopen shuttered agencies without such funding did not get the votes required to advance in the 100-member chamber. 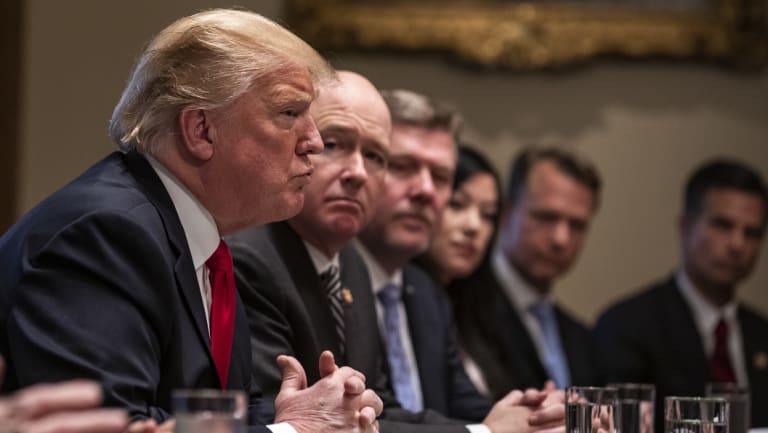 US President Donald Trump speaks during a meeting in the Cabinet Room of the White House on Thursday.Credit:Bloomberg

Immediately following the failed effort, Democratic and Republican senators spoke on the Senate floor and urged quick passage of a three-week, stopgap funding bill to end the partial government shutdown for now.

Some Democrats pledged to support more border security funding than was included in the Democrats' bill that was blocked in the Senate on Thursday.

But the White House issued a warning: a three-week funding bill would "only work if there is a large down payment on the wall", spokeswoman Sarah Sanders said in a statement.

Democratic Senator Chris Van Hollen said a measure to temporarily reopen shuttered federal agencies would be unveiled later on Thursday to end the 34-day shutdown, which was triggered by Trump's demand for money to fund a wall.

Republican Senator Lindsey Graham said he had spoken to Trump about a three-week funding bill.

"All of us believe if we have three weeks with the government open that we could find a way forward to produce a bill that he would sign, that would be good for everybody in the country," Graham said. "To my Democratic friends, money for a barrier is required to get this deal done."

Trump has touted Republican unity during the longest shutdown in US history.

But in a sign of cracks in that resolve, or a desire for compromise, six Republican senators voted with Democrats on their measure to temporarily reopen government agencies without money for Trump's wall. They included freshman Senator Mitt Romney, his party's 2012 presidential nominee.

House of Representatives Speaker Nancy Pelosi, a Democrat, told reporters earlier she was willing to meet with Trump to discuss the shutdown.

Trump has said he wants $US5.7 billion ($8 billion) for a border barrier, opposed by Democrats, as part of any legislation to fund about a quarter of the federal government for the year.

"Our Country has a chance to greatly reduce Crime, Human Trafficking, Gangs and Drugs. Should have been done for decades. We will not Cave!" Trump said in a tweet.

His demand, and Democrats' refusal to meet it, has sparked a shutdown of agencies that had not already received federal funding, leaving 800,000 federal workers, as well as private contractors, without pay and struggling to make ends meet, the effects on government services and the economy reverberating nationwide.

A Reuters/Ipsos poll last week found more than half of Americans blamed Trump for the shutdown.

Paedophile, 52, planned to go on the run with his partner