A vegan activist who claimed that she was attacked by an angry mob for freeing 16 rabbits from a farm might have caused more harm than good. She has now been accused of causing the deaths of nearly six times as many baby bunnies in the process, the New York Post reports, citing Spanish newspaper La Vanguardia.

Last Sunday, the woman, who goes by the name “Mythical Mia” on Instagram and is based in Barcelona, posted a video of herself, with blood on her face.

“This is what has just happened to us, look, I’m documenting the whole thing,” she says in the video, which has since been made private. “I’m covered in blood. This is what the farmers have done. They shot through our window and chased us down the motorway. Oh my God, I’m literally covered in blood.”

Mia, whose real name is unknown, said she had just rescued 16 rabbits from a farm near Osoño, a region near the border Spain shares with Portugal, before the confrontation occurred.

“Today, we entered a rabbit farm and rescued 16 lives,” she explains in her post. “The farmer was extremely aggressive and attacked us, strangling activists and smashing their heads with metal poles. The police came and told us to leave peacefully, which we did. After we left, the farmers chased us down the motorway at 200 kilometers for an hour. We tried to lose them down a side road, but they were on our tails. They blocked us into a dead end and surround the car with five other farmers’s cars. They were banging on the windows, shouting and threatening us. We called the police who arrived after an hour. They diffused the situation and escorted us to a ‘safe place.'” 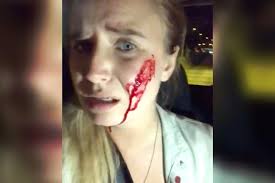 On Monday, however, La Vanguardia reported that at least five rabbits, all of which were pregnant and about to give birth, had been killed during the woman’s attempt to “save” the bunnies over the weekend.

Several other rabbits were purportedly left with broken spines, and a number of the rabbits that Mia had taken were allegedly pregnant or lactating. There were approximately 90 offspring in total. All of those babies, unfortunately, had to be euthanized after they were abandoned, the Spanish newspaper revealed.

Though the Post’s attempts to reach the activist were unsuccessful, the woman had ironically preached about saving the rabbits before killing many of them.

“What we do to the animals need to end immediately,” Mia said in her weekend post. “This injustice has gone on far too long. We will continue to enter in these facilities to expose these horrors and liberate the beings trapped inside for as long as it takes. We are not going anywhere. Join us in our fight, be vegan, be active and let’s put an end to this once and for all.”

ISIS terrorists ‘lined up in street and executed by rival jihadists’

Who is Colin O'Brady? US explorer who completed the first solo Antarctica trip

Elisabeth Moss gives it her all, but this ‘Invisible Man’ isn’t a must-see