Victoria has recorded 1466 new local coronavirus cases and eight deaths, as access to the Pfizer and Moderna vaccines at state-run clinics widens to include anyone over the age of 12. 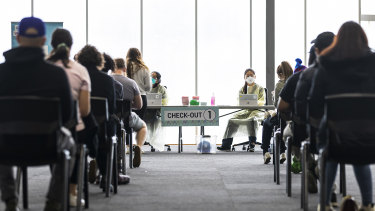 Anyone over the age of 12 can now receive a Pfizer or Moderna vaccine at Victoria’s state-run clinics. Credit:Daniel Pockett

At least 36,383 people received a dose of a COVID-19 vaccine at state-run clinics on Monday.

Health officials announced on Monday that all Victorians aged 12 and over, including previously exempt over-60s, would be able to receive the mRNA vaccines Pfizer and Moderna at state-run clinics.

Health Minister Martin Foley said the change was made possible by young people turning out in droves in recent weeks to get vaccinated against COVID-19, and the relative certainty of vaccine supply.

“Now, as we push towards 70 and 80 per cent double-dosed and beyond, it’s time to throw open the doors of all of our clinics – more than 60 of them across the state – to the mRNA vaccines,” he said.

“This change [to age eligibility] … has been made possible by the relative certainty that we now have for both Moderna and Pfizer and the extraordinary number of young people who have come forward over the past three-and-a-half weeks.”

From Monday, too, Victorians could permanently walk up to major state-run clinics and receive a Moderna vaccine without a booking. The arrangement was previously in place for a week.

Mr Foley said Victoria was well on its way to becoming “one of the world’s most vaccinated jurisdictions”.

Deputy secretary for the state’s COVID-19 response, Naomi Bromley, said the state’s first-dose rate of 86 per cent for those aged 16 and over on Monday put it ahead of countries including the US, Switzerland, Israel, Germany, Sweden, and Austria.

The Robin Hood Inn at Drouin West in the Baw Baw Shire was declared tier 1 over seven days, from Tuesday, September 28 through to Monday, October 4.

Lush Barber at Bendigo was listed as a tier 1 site over three days, between Wednesday, October 6 and Friday, October 8, while a salon named Honeyeater in the regional city was declared tier 1 from Tuesday, October 5 through to Thursday, October 7.

There were two new close contact sites in Greater Geelong: BB Chicken and Pub, and Next Level Skirmish in the regional city’s north.

Meanwhile, KingKids Early Learning Centre and Kindergarten at Mooroolbark was declared tier 1 on Monday, October 4 between 8am and 1.30pm.

G7 leaders will discuss 'rising threats' from China and Russia