Victoria has recorded two new local COVID-19 cases, both in primary close contacts, breaking the state’s run of zero infections as the Andrews government prepares to wind back restrictions.

The Department of Health said both cases were primary contacts of pre-existing cases and have been quarantining during their infectious period.

The new cases have broken Victoria’s six-day run of no new infections, restrictions similar to those that were in place at Christmas are set to return after midnight on Friday.

Nine senior Victorian ministers are meeting on Friday morning to finalise a plan to ease mask restrictions and allow more people inside homes. 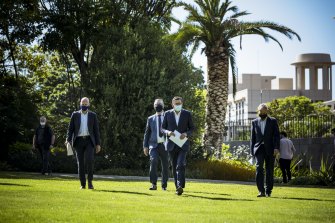 The intention, according to two government sources familiar with the plans who spoke on the condition of anonymity because the details are subject to change, is to revert to a set of rules resembling the “COVID-safe summer” restrictions that were in place before an outbreak in late December that was traced to a Thai restaurant in Black Rock.

Before that cluster – which stemmed from NSW – 30 people could gather inside a home. This number was cut to 15 before New Year’s Eve and has been limited to five indoors and 20 people outdoors since last Wednesday as health officials have attempted to transition out of the snap lockdown without risking more infections.

The government may opt for a more cautious approach and allow 15 indoors again rather than 30.

Under pre-Black Rock rules, masks were required to be worn only at indoor shopping centres and supermarkets as well as on public transport and in ride-share vehicles. The business community is hoping the government will lift the office capacity limit from 50 per cent to 75 per cent.

Premier Daniel Andrews said on Thursday that he was “very confident [Friday] would be a day of good news”.

“I will try to get the settings back as close to – not New Year’s Eve – but Christmas, a COVID-safe summer setting. I won’t commit to it today … but it will be tomorrow morning,” Mr Andrews said.

“Let’s hope tomorrow is the seventh day of zero cases … and the test number is still strong.”

Density rules for businesses, including hospitality venues, and ceremonies such as weddings and funerals have already reverted back to pre-Christmas settings.

Friday will mark the end of the 14-day incubation period for many close contacts of COVID-positive people infected during the Holiday Inn outbreak.

Very few close contacts have become infected since the lockdown ended while active cases have dropped as infected people recovered.

When the COVID-safe summer rules were announced in early December, Chief Health Officer Brett Sutton said the rules represented the closest return to normal that could be done safely in the absence of widespread vaccine takeup.

A total of 808 vaccine doses were administered in Victoria on Wednesday, up from 675 on Tuesday and 580 on Monday.

South Australia has reopened its border to Melburnians, and Queensland will lift its travel restrictions on the city from 1am on Saturday.

Professor Sutton indicated after the five-day lockdown that health officials realised its tracing and isolation model was sufficient to deal with outbreaks involving more infectious strains of the virus – indicating that if it was presented with a similar set of circumstances the government might not mandate another lockdown.

Paul Guerra, chief executive of the Victorian Chamber of Commerce and Industry, said relaxing indoor mask rules meant more workers would feel comfortable returning to offices and the city’s economy would regenerate. He said increasing office capacity to 75 per cent would be welcomed but said it would not be disastrous if the government waited longer to enact that change.