The not-so-mighty Mississippi! Video shows how drought has reduced parts of waterway to a CREEK, with 1,700 barges jammed and water headed for its lowest level since 1988

An ongoing drought is on course to reduce the Mississippi River’s water level to a 34 year low, with 1,700 barges left jammed on the waterway after one ran aground.

Shocking video shows the river nearly hollowed out, with deep stretches of riverbed visible on both sides as little pools of water run through the middle in parts of Tennessee.

Climate experts say that if the drought continues, the Mississippi will beat its previous low-water crisis record, which was set in 1988.

Weather Channel video shows a person driving what appears to be a golf cart along the dry river bed that stretches for miles.

The drought is so bad that 1,700 barges were jammed up near Vicksburg, Mississippi, over the weekend after one tow boat ran around.

More than 20 vessels and almost 400 barges are still stuck near Stack Island, as of Tuesday.

That snag has now been reduced to 22 tow boats pulling a total of 392 barges, with federal officials now facing a multi-billion dollar dredging bill to try and keep river traffic moving.

The Mississippi is used to transport grain and soy beans from states which grow the vital food stuff.

Any interruptions to this supply of cargo could lead to shortages, and further push up prices for Americans already battered by inflation.

The Mississippi basin, which runs for 1.2million square miles across 31 states and two Canadian providences – covering 41 percent of the contiguous US – has been hit with significant drought in the last few months.

And long-term forecasts are predicting the unseasonably dry season will continue into the winter, with no respite in sight. 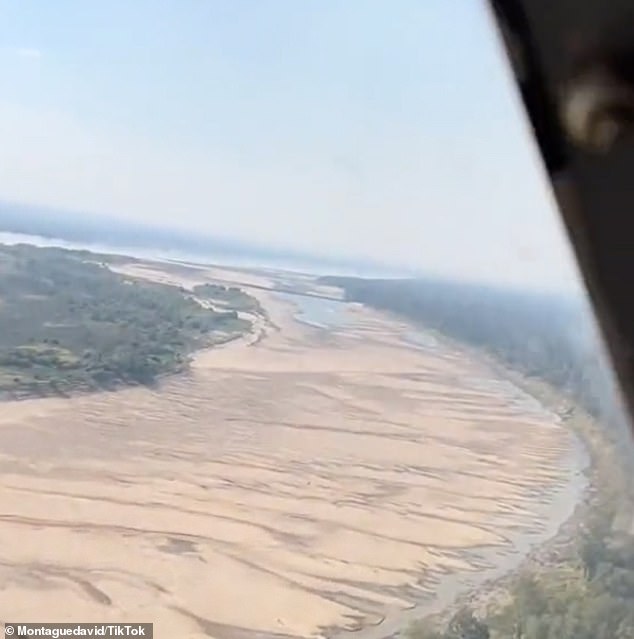 Shocking video shows the Mississippi River nearly hollowed out, with deep stretches of riverbed visible on both sides as a little pools of water run through the middle 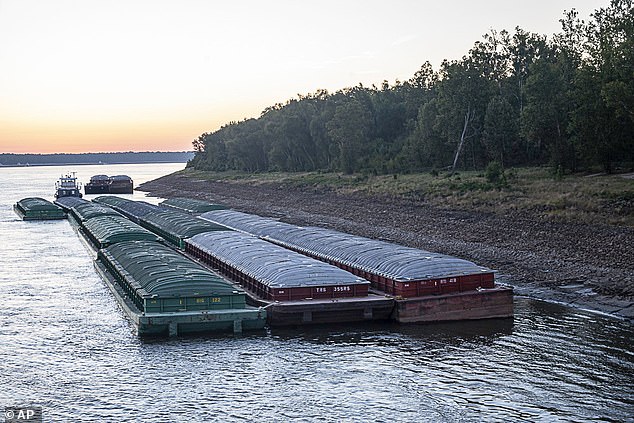 Parts of the river are so low it has caused a backup of 1,700 barges near Vicksburg, Mississippi (pictured on October 4)

Ongoing droughts affecting many western states, including those which encompass the Great Plains, have now hit the Mississippi River.

Oklahoma, Missouri, Kansas, Iowa, and South Dakota rank among the driest 15 states this year for precipitation levels between June and September. Nebraska has hit it’s third-driest summer stretches this year, according to the National Centers for Environmental Information.

These issues continue to affect the river and if it continues to ‘stay dry through the rest of the year, levels could be even worse than we had in 2012,’ National Weather Service Hydrologist, Jeffrey Graschel, told the Post.

‘It just remains to be seen how much rain we get over the next month to three months.’

If the drought continues, dry conditions could surpass the 2012 levels and possibly approach the severity of the 1988 low water crisis, Graschel said.

Some parts of the river are reading in the negative, far below normal water levels, which is risking drinking water for residents whose water supply depends on the behemoth.

That is because the force of fresh water exiting the river into the Gulf of Mexico is no longer strong enough to push back the salty water from the Gulf itself.

In Louisiana’s Plaquemines Parish, water reaching the river’s mouth is getting salt water mixed in from the Gulf of Mexico, which is threatening the water supply. If too much salt water gets mixed in, it could require emergency action by the Army Corps of Engineers, according to the Washington Post.

On September 28, parish residents were warned that their water contained higher levels of sodium and chloride and could cause adverse health effects to those on dialysis or low-sodium diets.

The Army Corps is said to be building a sediment barrier across the river channel to help the move of salt water from the Gulf.

Now, many barges are stuck waiting for the water supply to rise again to be able to pass through safety.

The Army Corps had to halt maritime traffic and dredge channels throughout the river to help pass through lighter-loads near Vicksburg. 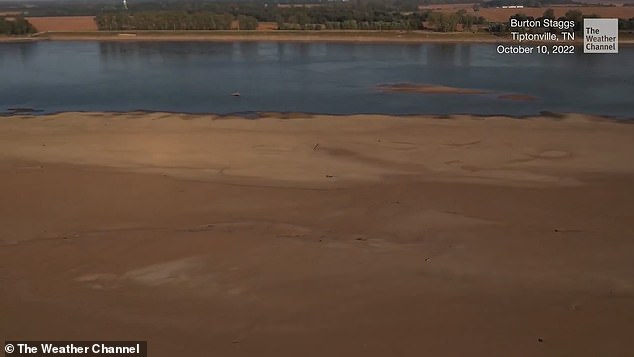 The Mississippi basin, which runs for 1.2million square miles across 31 states and two Canadian providences- covering 41 percent of the contiguous US – has been hit with significant drought in the last few months 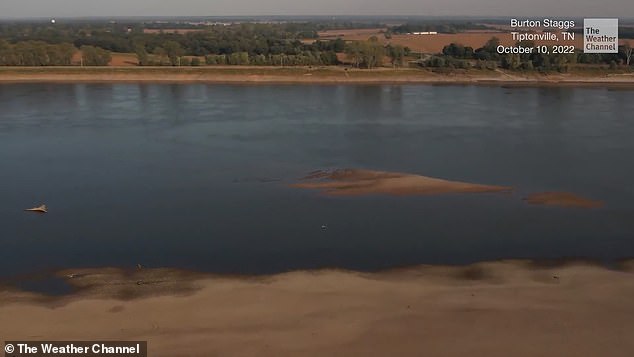 Dredging already cost more than $2billion a year, and could cost even more if barges keep running aground.

However, the transportation industry says dredging is need to keep the supply chain moving, as 60 percent of the US soybean and corn productions are moved through the river, as well as Arkansas, Illinois, Ohio, and Tennessee’s rivers.

‘Commerce is moving, albeit very slowly,’ Senior VP of Waterways Council, Deb Calhoun, told the Washington Post. ‘Ultimately, we need rain, and lots of it.’

The transportation industry has also limited the number of cargo that’s allowed to be attached to towboats, limited it from 40 to 25.

How is the Queen doing? Latest updates on Her Majesty

Brits want to grow their own food but many think it's impossible because of where they live, study finds