Home » World News » Warnock or Walker? The last battle of the US midterms under way in Georgia

Atlanta: Georgia voters on Tuesday are deciding the country’s final Senate contest, choosing between Democratic Senator Raphael Warnock and Republican football legend Herschel Walker after a four-week runoff blitz that has drawn a flood of outside spending to an increasingly personal fight.

The outcome will determine whether Democrats have an outright 51-49 Senate majority or control a 50-50 chamber based on Vice President Kamala Harris’ tiebreaking vote. 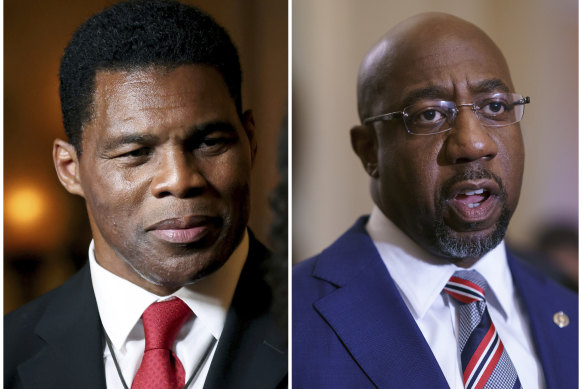 The race will also be a last test of Donald Trump’s clout with voters as he seeks the Republican nomination to challenge President Joe Biden in 2024. The former president had a mixed record in his most competitive endorsements for Congress in the November midterm elections, including Walker.

The runoff set early voting records in Georgia in a race that has become the most expensive of the 2022 US midterm election season, with more than $US400 million ($600 million) spent so far. The contest went to a runoff after neither candidate secured 50 per cent of the vote in the November 8 first round.

Cold, rainy conditions greeted voters in the Atlanta area. At an elementary school in suburban Johns Creek, lines formed before the polls opened but later moved swiftly with voters undeterred by the weather.

Retired firefighter Keith Fields, 58, showed up at the polls at 6am – an hour before they opened – to cast his ballot for Walker in Smyrna. He said he backed Walker because of his stance on immigration, taxes and abortion without exceptions. 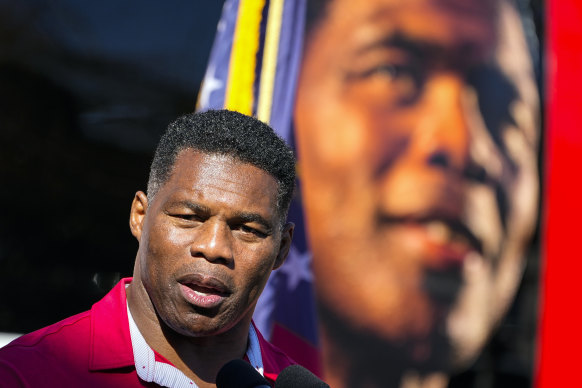 Republican candidate for US Senate Herschel Walker speaks during a campaign rally stop.Credit:AP

“It’s not so much Herschel as the man, but I do like the man, but I’m also voting for the policies that he is going to vote for,” Fields said.

The runoff brings to a close a bitter fight between Warnock, the state’s first black senator and the senior minister of the Atlanta church where Martin Luther King jnr preached, and Walker, a former University of Georgia football star and political novice who has campaigned with the support of former President Donald Trump.

A Warnock victory would solidify Georgia’s status as a battleground heading into the 2024 presidential election. A win for Walker, however, could be an indication of Democratic weakness, especially given that Georgia Republicans swept every other statewide contest last month.

In the November election, Warnock led Walker by about 37,000 votes out of almost 4 million but fell shy of a majority, triggering the second round of voting. About 1.9 million runoff votes already have been cast by mail and during early voting, an advantage for Democrats whose voters more commonly cast ballots this way. Republicans typically fare better on voting done on Election Day.

Last month, Walker, 60, ran more than 200,000 votes behind Republican Governor Brian Kemp after a campaign dogged by his meandering campaign speeches and damaging allegations, including claims that he paid for two former girlfriends’ abortions — accusations that Walker has denied. 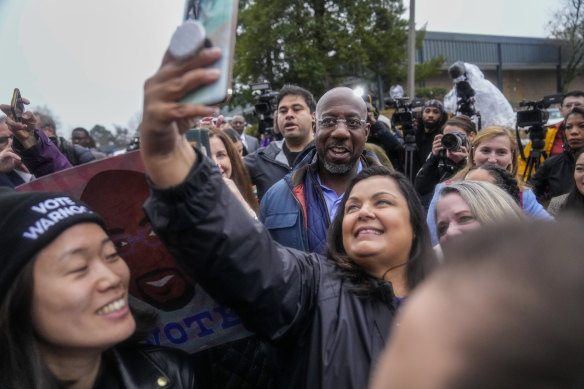 Atlanta voter Tom Callaway praised the Republican Party’s strength in Georgia and said he’d supported Kemp in the opening round of voting. But he cast his ballot Tuesday for Warnock because he doesn’t think “Herschel Walker has the credentials to be a senator”.

“I didn’t believe he had a statement of what he really believed in or had a campaign that made sense,” Callaway said.

Warnock, whose 2021 victory was in a special election to serve out the remainder of GOP Senator Johnny Isakson’s term, says he’s convinced enough voters, including independents and moderate Republicans who supported Kemp and deserves a full term.

“I think they’re going to get this right,” the 53-year-old senator said Monday. “They know this race is about competence and character.”

Walker campaigned Monday with his wife, Julie, greeting supporters and offering thanks rather than his usual campaign speech and attacks on Warnock.

“I love y’all, and we’re gonna win this election,” he said at a winery in Ellijay, comparing the election to his athletic success. “I love winning championships.

Walker, who used his athletic fame to coast to the GOP nomination, has sought to portray Warnock as a yes-man for President Joe Biden. He has sometimes made the attack in especially personal terms, accusing Warnock of “being on his knees, begging” at the White House — a searing charge for a black challenger to level against a black senator about his relationship with a white president.

A multimillionaire businessman, Walker has inflated his philanthropic activities and business achievements, including claiming that his company employed hundreds of people and grossed tens of millions of dollars in sales annually, even though later records indicate he had eight employees and averaged about $US1.5 million a year. He has suggested that he’s worked as a law enforcement officer and said he graduated college, though he has done neither.

Walker was also forced to acknowledge during the campaign that he had fathered three children out of wedlock whom he had never before spoken about publicly — in conflict with his yearslong criticism of absentee fathers and his calls for black men, in particular, to play an active role in their kids’ lives.

His ex-wife said Walker once held a gun to her head and threatened to kill her. He has never denied those specifics and wrote of his violent tendencies in a 2008 memoir that attributed the behavior to mental illness.

Who was Ethan Powell and why are people rioting in Mayhill, Swansea?