Home » World News » Waukesha update: I held a little girl's head in my hands as she bled from her ears after being hit in parade horror

WITNESSES have recalled the horrific aftermath of the mayhem that unfolded at a Wisconsin Christmas parade on Sunday when an SUV plowed into the crowd, killing five.

More than 40 people, including 12 children, were also injured after the red Ford Escape smashed through a series of barricades and sped into the crowded parade route along Main Street, in Waukesha, at 4.30pm. 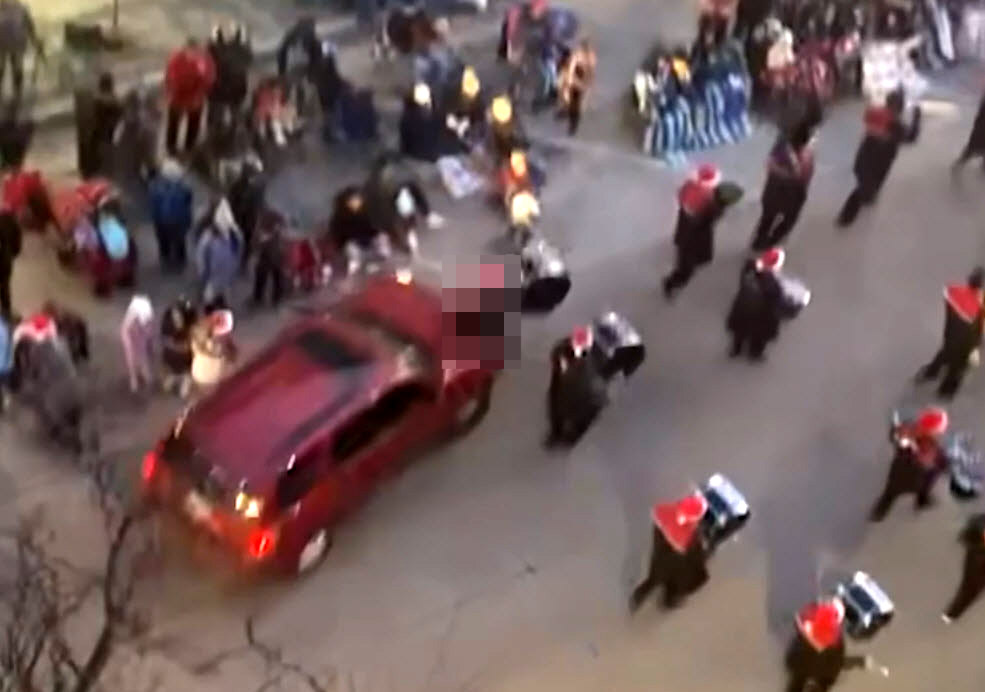 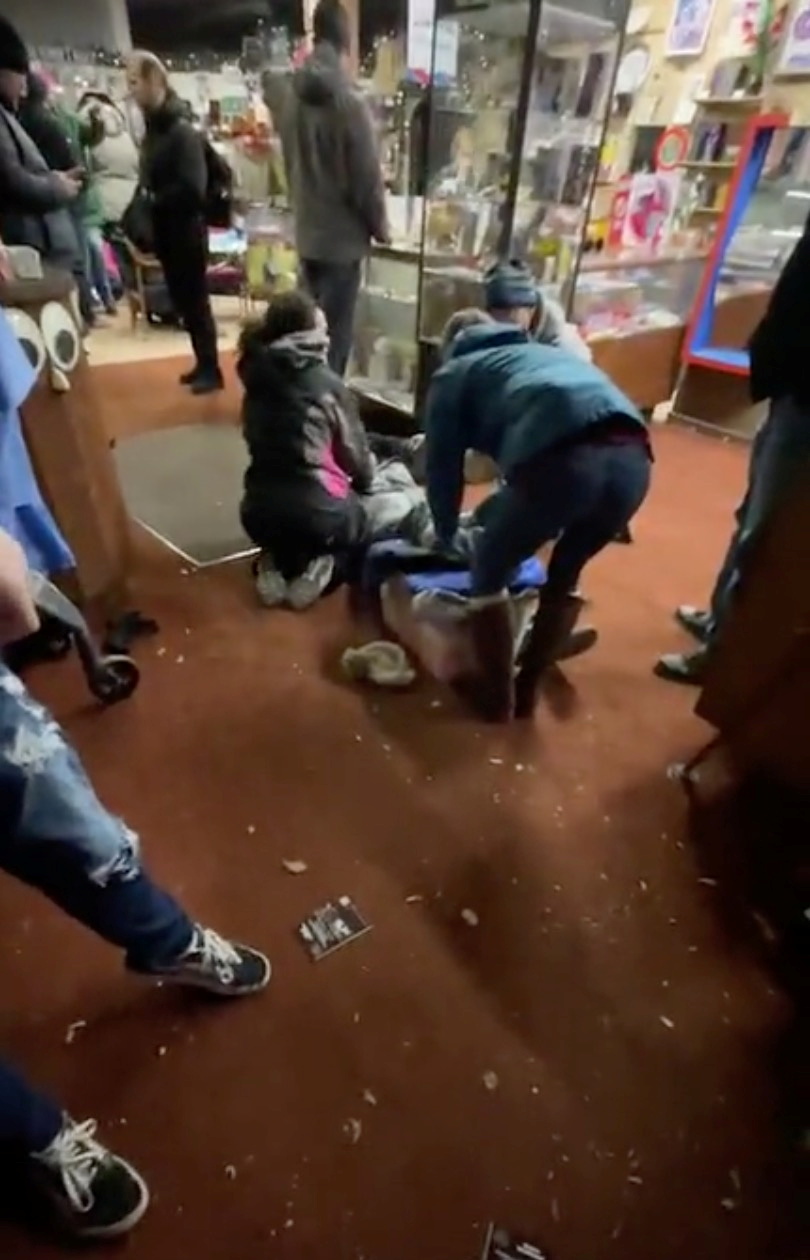 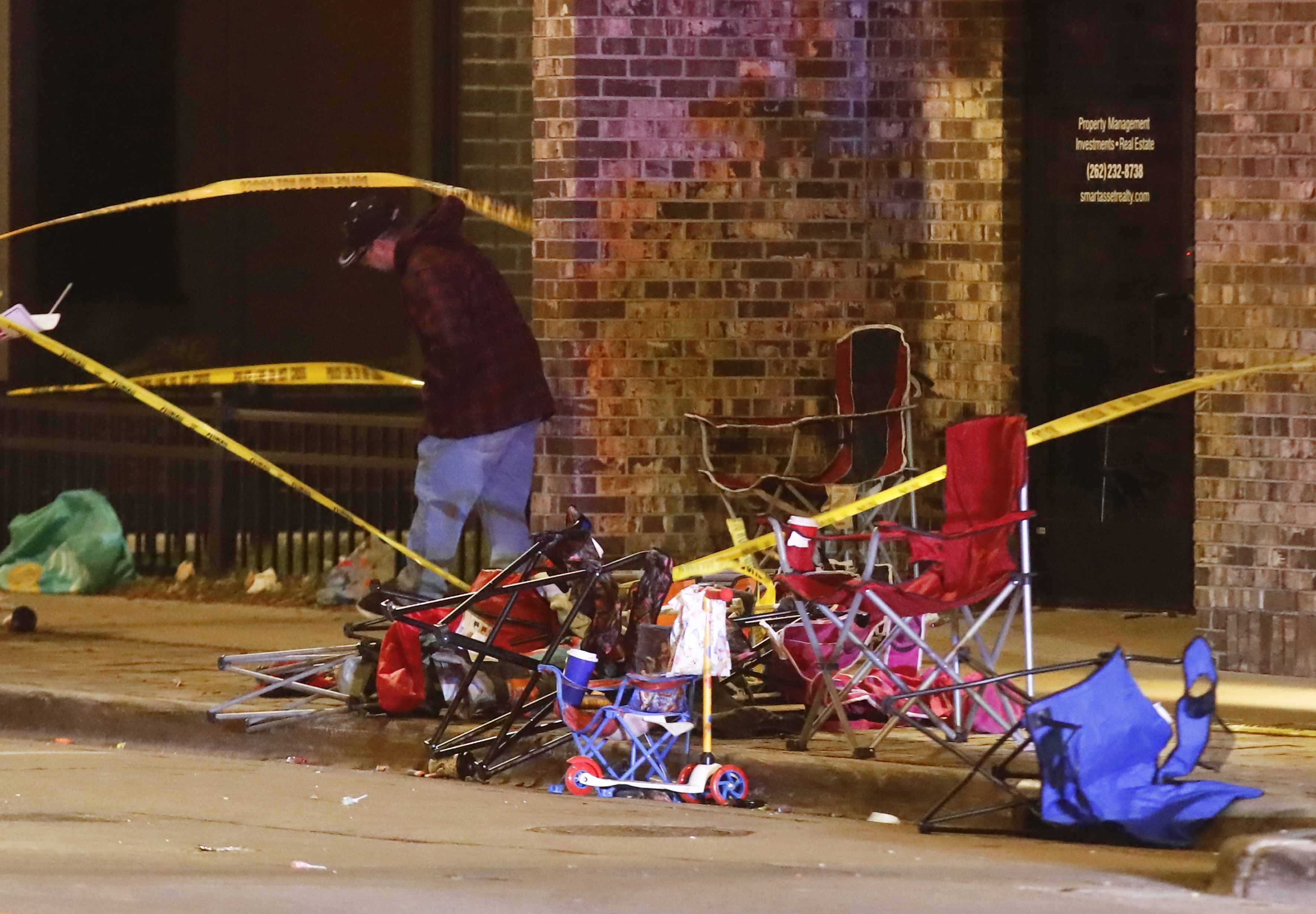 Local performance groups and high school bands had been participating in the historic annual parade for less than 30 minutes when the horror unfolded.

It's unclear at this time whether the incident was an act of terrorism, Police Chief Daniel P. Thompson said. Law enforcement sources suggested to CNN that the suspect was fleeing another incident when he barreled into the parade route.

Thompson confirmed that a "person of interest" was in custody but refused to specify whether it was the driver of the red Ford and whether any arrests had been made. A second person was in the SUV, ABC reported.

The person of interest has been identified in a report by NBC as Darrell Edward Brooks, 39, a rapper who goes by the name MathBoi Fly.

As an investigation continues, witnesses and Samaritans have recalled racing to the aid of victims, performing CPR in the blood-soaked street as parent's desperately called out their children's names.

'ONE CRUMPLED BODY TO ANOTHER'

Corey Montiho, a Waukesha school-board member, said he went from "one crumpled body to the other" looking for his daughter, who was part of a dance team performing in the parade.

"There were pom-poms and shoes and spilled hot chocolate everywhere," Montiho told the Milwaukee Journal Sentinel. "I had to go from one crumpled body to the other to find my daughter. My wife and two daughters were almost hit. Please pray for everybody. Please pray.

"My family is safe, but many are not. I held one little girl's head in my hand. She was seizing and she was bleeding out of her ears. I held her mother as she collapsed."

Angelito Tenorio, who is running for state treasurer, also recalled how he saw the SUV "zooming at full speed" down the street as he was walking toward the parade.

"It was absolutely chaotic. It was horrifying," he told CNN. "Nobody knew if this was an attack or if this was an accident or if it was a deliberate attack on the people of the parade.

"People just started fleeing, running away from the scene, leaving behind their belongings, grabbing their children, calling, screaming, looking for their loved ones. And when the crowd cleared out, that's when it looked like I saw people, who appeared to be lying in the middle of the street, lying still, lying lifeless."

He added: "The last thing I heard was the band music, and then I heard the vehicle, almost the engine revving, speeding up. It sounded like the driver was putting the pedal to the metal, speeding along the route.

"I just heard a loud bang and screams and cries."

BODIES 'TOSSED INTO THE AIR'

Brayden Kowalski, a 19-year-old man who grew up in Waukesha, told Fox News how he was at the parade with his family when he saw the SUV accelerate through a sea of people.

"He’s just blowing through people, kind of just dinging a lot of people, bodies flying everywhere," he said. "These people didn’t get run over, they got f**king thrown through the air. Like a lot of people got tossed up into the air."

Almost immediately after the SUV went through the crowd, Kowalski and his mom went out into the crowd to try to help people who were hurt.

"You could see the fragments of brains," he said. "There were quite a few people with broken limbs, like a lot of broken legs, a lot of people shouting with broken legs. It was horrifying."

David Monfre, who said his son was a band member playing in the parade, told local news outlet GM Today that his child had just marched past when he spotted the speeding red SUV.

"My son just passed with his band, which is Waukesha South, and a truck [came] barreling through, almost hit the back of a float truck," Monfre said. "It ended up hitting a bunch of band members, and it went all the way up the road."

Horrifying footage of the moment that car carved through the crowd has since emerged on social media.

Panic-stricken attendees are heard crying out "what the hell just happened", as lifeless bodies lay in the roadway, with shoes, items of clothing, and flags discarded in the street around them.

Police opened fire at the SUV as it sped through the crowd, though nobody was injured by the gunfire.

Some of the videos posted to Twitter appeared to show the “Milwaukee Dancing Grannies” being struck by the vehicle. Members range in age from their early 50s to mid-70s.

In a statement posted to Facebook, the group confirmed that some of its members had died in the incident.

"The Milwaukee Dancing Grannies are devastated by this terrible tragedy with loss of life and injuries in the Waukesha Christmas parade," the group began.

"Our group was doing what they loved, performing in front of crowds in a parade putting smiles on faces of all ages, filling them with joy and happiness.

"Those who died were extremely passionate Grannies. Their eyes gleamed…joy of being a Grannie. They were glue…held us together.

"Our hearts are heavy at this most difficult time. Please keep the Grannies, all those injured, and all those who witnessed this horrible event in your thoughts and prayers."

The Catholic Community of Waukesha confirmed on Facebook that several parishioners were injured and are hospitalized.

A total of five people have been confirmed dead, though police have warned that the number of fatalities may yet still rise.

"We are deeply saddened by today's senseless tragedy and our hearts are with the Waukesha community," a statement from the hospital said.

Children's Wisconsin, a pediatric hospital in Milwaukee, said it was treating 15 patients who were hurt, with no reported fatalities as of Sunday night.

Froedtert Hospital in Milwaukee, a Level 1 trauma center, confirmed it was also treating patients but declined to specify how many or speak to the severity of the injuries suffered.

Wisconsin Governor Tony Evers released a statement via Twitter, saying: "Kathy and I are praying for Waukesha tonight and all the kids, families, and community members affected by this senseless act.

"I'm grateful for the first responders and folks who acted quickly to help, and we are in contact with local partners as we await more information."

Police say there's no active threat to the area at this time.

On Monday morning, Evers ordered all flags to be flown at half-staff across the state to honor those who were killed and injured and those "whose lives were forever changed by an unthinkable tragedy."

Roads in the area will remain closed for at least 24 hours. Businesses along Main Street should also remain closed on Monday, city officials said.

Classes in the School District of Waukesha were canceled on Monday, with a decision to be made on whether schools will reopen tomorrow.

Officials with the district confirmed that counselors would be available during the school day for any students who made be in need of support.

The White House has also been in contact with local and state officials about the incident. President Joe Biden has been briefed on the matter, official spokesperson ls said.

"The White House is closely monitoring the situation in Waukesha and our hearts go out to everyone who has been impacted by this terrible incident," a White House official said.

"We have reached out to state and local officials to offer any support and assistance as needed." 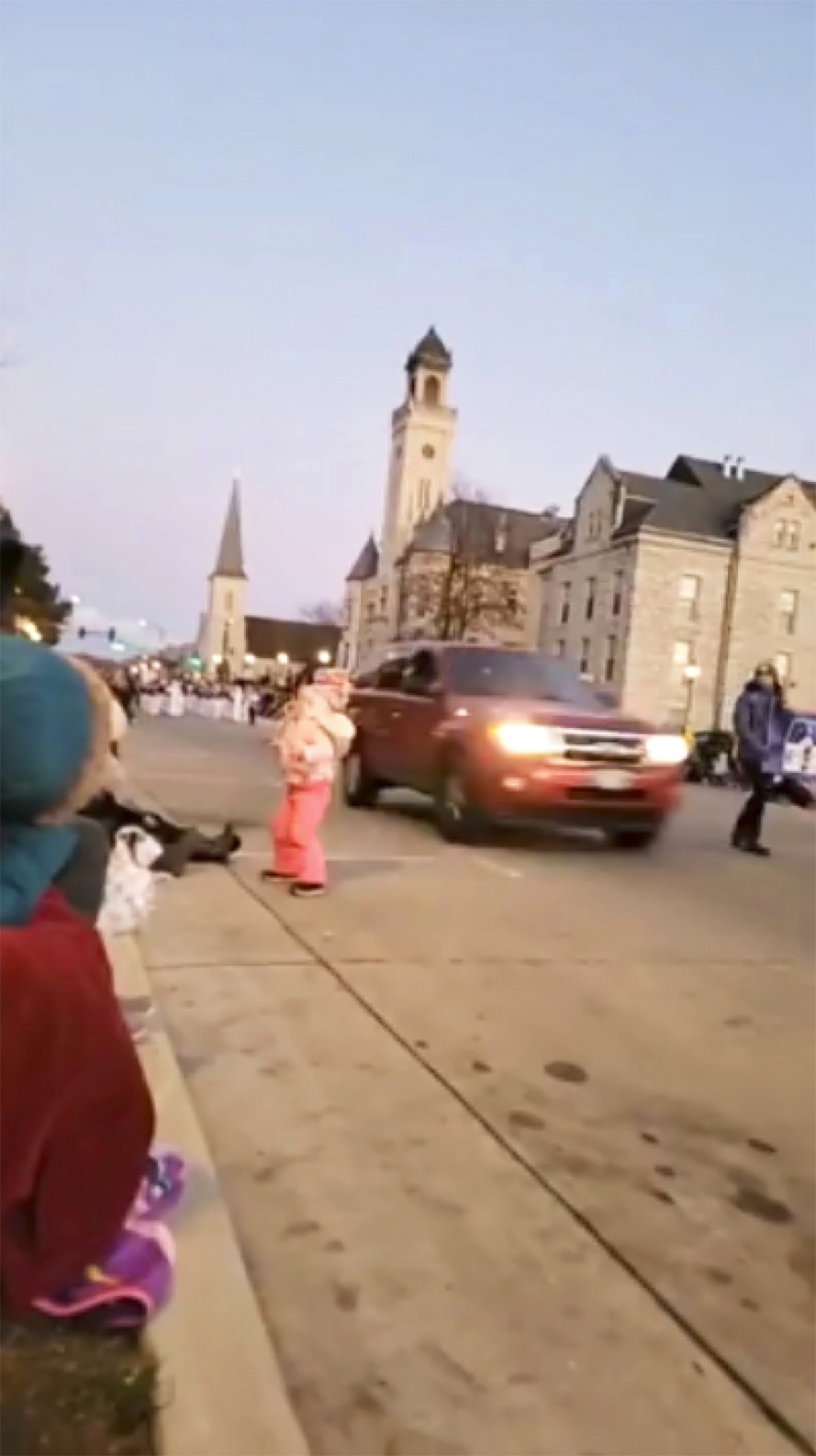 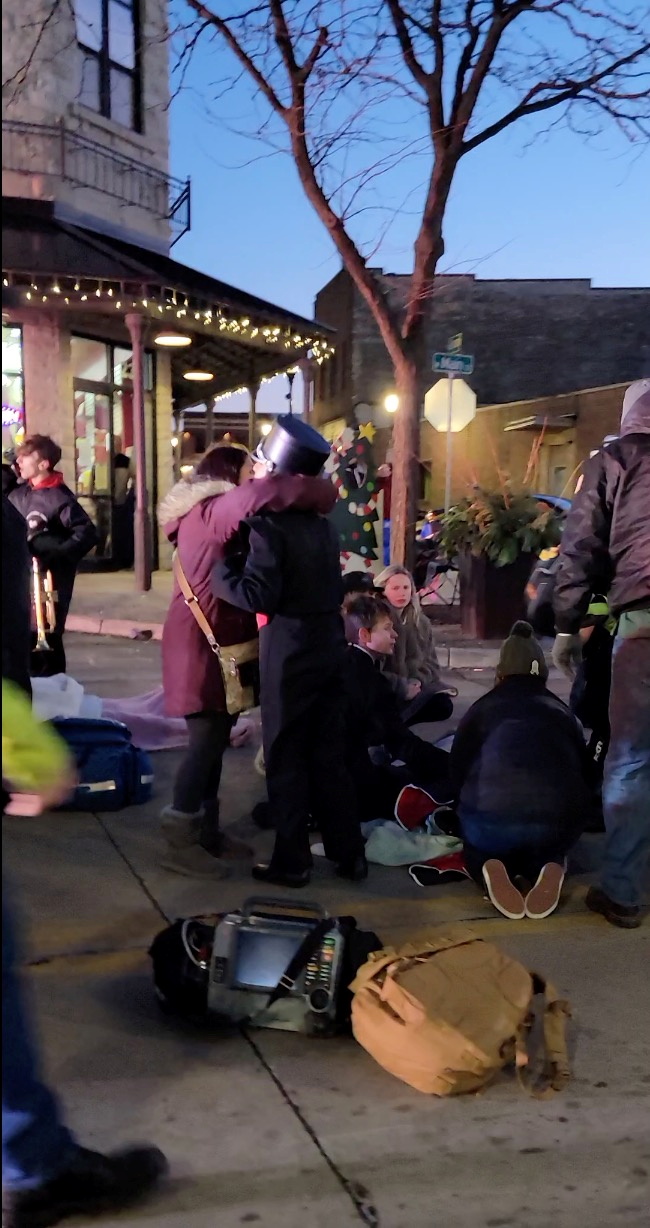 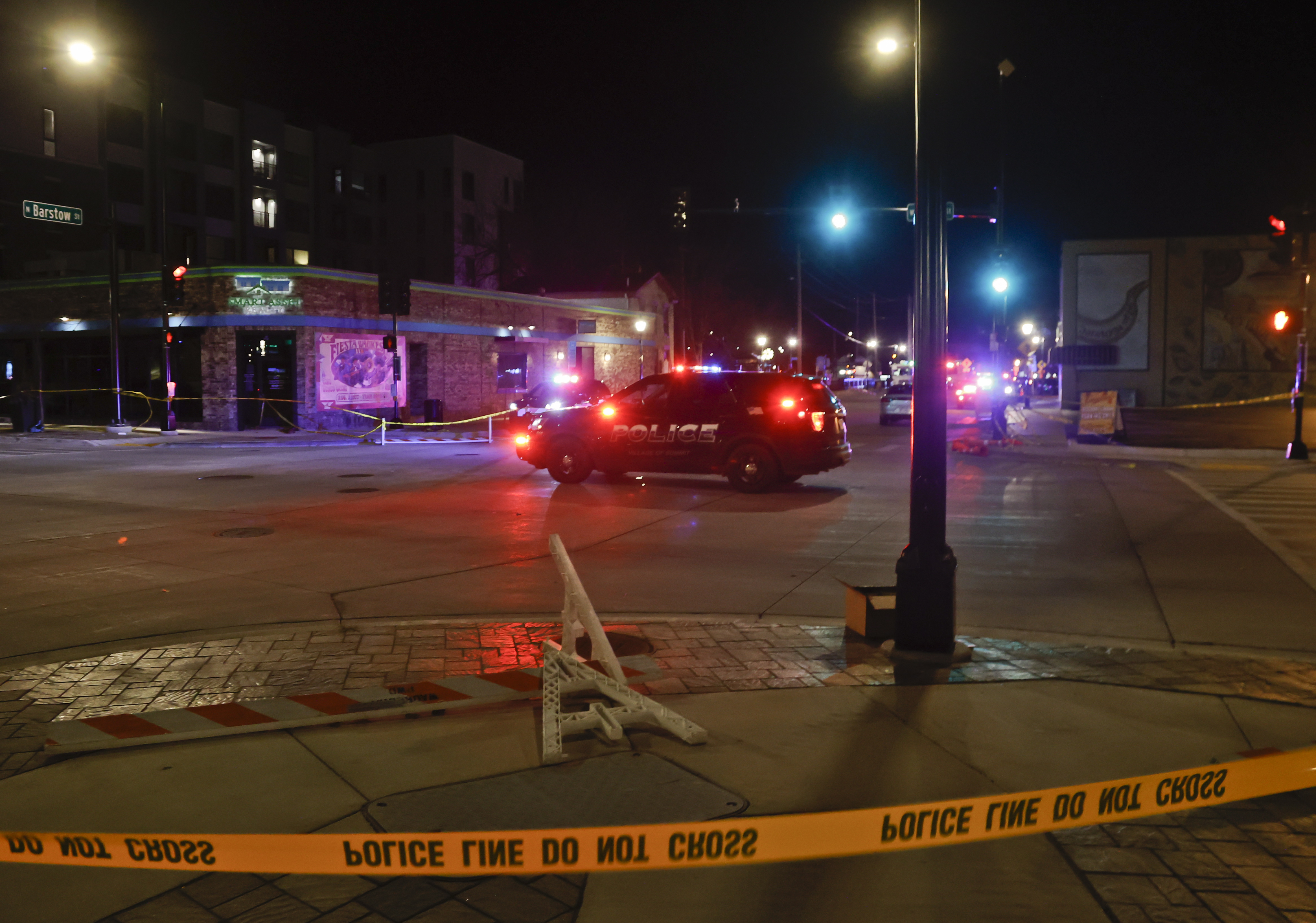 Woman, 61, killed in explosion 'was on a video call with friends'