Home » World News » ‘We do not do this lightly’: Science magazine endorses first candidate in 175 years

The magazine, Scientific American, which counts Albert Einstein as a past contributor, is endorsing a presidential candidate for the first time since it went into print in 1845.

"Scientific American has never endorsed a presidential candidate in its 175-year history," the storied publication begins its endorsement of Democratic candidate Joe Biden. "This year we are compelled to do so. We do not do this lightly." 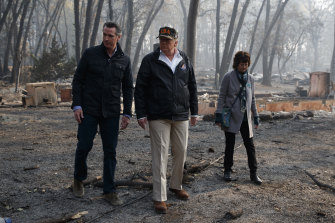 Rush Limbaugh told millions of his radio listeners to set aside any suggestion that climate change was the culprit for the frightening spate of wildfires ravaging California, Oregon and Washington state.

"Man-made global warming is not a scientific certainty; it cannot be proven, nor has it ever been," Limbaugh declared on his Friday show, disregarding the mountains of empirical evidence to the contrary.

He then pivoted to a popular right-wing talking point: Policies meant to curtail climate change are, in fact, an assault on freedom.

Limbaugh and Carlson are two of the most prominent commentators in the right-wing media sphere, where a rich history of climate denialism has merged with Trump-era cultural warfare.

The conflagrations, which officials and scientists have described as unprecedented in scope and ferocity, have also filled the region's skies with smoke and soot, compounding a public health crisis already posed by the coronavirus pandemic.

Scientific American said that “the evidence and the science show that Donald Trump has basically damaged the United States and its people because he rejects evidence and science".

Senior editor Josh Fischman sharply condemned Trump for his handling of the coronavirus pandemic. The magazine criticised Trump for seeking cutbacks in scientific funding and hobbling the US response to climate change.

Biden, the magazine said, “has a record of following the data and being guided by science.”

There was no immediate reply to a request for comment from the Trump campaign.

There's been some pushback. Helmuth said the magazine has been monitoring requests for cancelled subscriptions and has received some — many from people who weren't subscribers, anyway.

Conservative columnist S.E. Cupp tweeted that while she agreed with the magazine's arguments and planned to vote for Biden, “I do have mixed feelings on whether this is a good use of scientific clout and credibility".

University of New Mexico psychology professor and author Geoffrey Miller said that the magazine was betraying 175 years of principled bipartisanship “for the sake of some cheap, short-sighted, opportunistic virtue signalling.”

“I'm old enough to remember when your magazine had some integrity,” he tweeted.

Our weekly newsletter will deliver expert analysis of the race to the White House from our US correspondent Matthew Knott. Coming soon. Sign up now for the Herald‘s newsletter here, The Age‘s here, Brisbane Times‘ here and WAtoday‘s here.