The principal of one of Melbourne’s largest independent schools says he is “deeply disappointed” by allegations some of his students made misogynistic comments on public transport hours after Monday’s March 4 Justice.

Wesley College said on Tuesday it was attempting to identify the students, who were overheard by other bus passengers making derogatory statements against women. Several passengers had attended the Melbourne event. 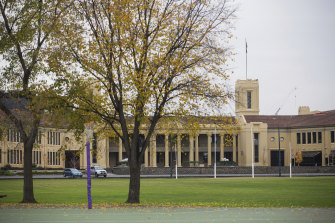 Wesley College is investigating an allegation that students made misogynistic comments on public transport after Monday’s March 4 Justice rally.Credit:Paul Jeffers

A 16-year-old student from nearby St Michael’s Grammar, who was on the bus, emailed Wesley administration on Monday afternoon saying he had witnessed the boys in Wesley uniforms making loud, “disgusting” comments about women. He said the driver had apologised to several people, who were so upset they disembarked.

Having attended the rally, where more than 5000 Melburnians protested against sexual assault and in support of gender inequality, with students from his school, the teen said he felt “pretty disgusted” and left the bus immediately with some other passengers.

“Some older ladies were really uncomfortable and got off the bus and the driver was like, ‘I’m really sorry about that’,” he told The Age.

“He let us get off as soon as possible.”

The student immediately wrote to the school, saying the incident was “extremely disappointing, disgusting and concerning” and that “it is extremely sad that the Wesley cohort has not yet learnt to value and respect others, especially women”.

“It was just gross to hear that kind of language come from people my age, especially someone who’s been brought up in the world that they have. They shouldn’t be acting like that, they know better,” he said.

Wesley principal Nick Evans issued a letter to the school community on Tuesday afternoon saying he was aware of “disrespectful behaviour” from some of his students on public transport on Monday.

“I understand that these students made derogatory comments about women which was highly offensive and caused extreme discomfort,” he said.

Letter from Wesley College principal to parents about the incident

Today, I was made aware of the disrespectful behaviour of some of our students travelling on public transport yesterday. I understand that these students made derogatory comments about women which was highly offensive and caused extreme discomfort. This behaviour is unacceptable. I am deeply disappointed to have Wesley students behave in such a manner. Such behaviour does not reflect what we value and share in our Wesley community.

I have run the gamut of emotions as a result of this news, from fury to frustration, from disbelief to determination, from shame to sadness.

I am sad because this is indicative of behaviour I have witnessed too often from too many men. Casual misogyny and sexism are so often expressed in all male conversations. This episode is no exception. I am ashamed not just because this reflects poorly on a school I love, but also because there have been times in my life, particularly my youth, when I was a bystander of such conversations and thus helped perpetuate them.

In my email of last week, I indicated that the Associate Principal Morag Howard in consultation with Heads of Campus, Kim Bence, Sheriden Vella and Jacinta Janssens conducted an audit of our programs dealing with consent and respectful relationships. The curriculum includes sexual intimacy, pornography, acceptable and unacceptable behaviour, and sexual risks and consequences, consent and the law, and gender-based violence. I also indicated last week that we would be examining how effective these programs are. We have begun a series of conversations with students regarding their effectiveness. It was clear last week, and it is even clearer now, that we have work to do.

As part of this work, Wesley College has recently partnered with Bravehearts, a leading child protection organisation. For our students this will provide additional education focusing on safety, consent and respectful relationships for young people as well as professional training for Wesley staff. I would like to add that I do not believe that the few involved in this incident represent the more than 3,300 students who attend Wesley College and who interact with their peers, teachers and wider community with respect and humility. The considerate young leaders that I challenged at the Prefect’s Dinner just weeks ago to bring the voice of the students to us are fine examples of our students – and they are the ones that your children look up to and model themselves after.

This episode is a painful moment, for those members of the public on the bus who had to endure it and for those of us who love this school. But from such pain must come learning and action.

With every good wish

“This behaviour is unacceptable. I am deeply disappointed to have Wesley students behave in such a manner. Such behaviour does not reflect what we value and share in our Wesley community.”

Mr Evans said he had “run the gamut of emotions as a result of this news, from fury to frustration, from disbelief to determination, from shame to sadness”.

“However, I am also hopeful because young people, young women and young men, are not prepared to be bystanders any longer,” he said. 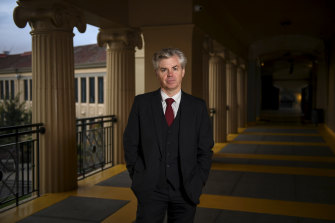 Wesley College principal Nicholas Evans has written to parents about an incident in which misogynistic comments were made about women by students on a bus.Credit:Penny Stephens

Mr Evans said the boys involved had not been identified yet, but “we are treating this as if it did happen”.

On Friday, the principal issued a bulletin calling on parents to share the load of teaching children about respectful relationships, suggesting many students were not receptive to learning about sexuality, pornography and respect in the classroom.

Prompted by the testimonies of sexual assault by school boys of thousands of young women who signed a national petition calling for better consent education, Mr Evans said Wesley would review its teaching of respectful relationships and consent.

The principal said he was confident the coeducational college taught respectful relationships and consent, but admitted that he was “less confident in how this is being received by those in our charge”.

Mr Evans said on Tuesday “it’s clear from what emerged in Sydney [where the consent petition and assault testimonies started] that we can no longer be surprised” when instances of sexist behaviour among young people arise.

“This is a systemic problem we need to deal with as a society. I’m just furious about this, about the sexual harassment women of all ages have to endure and it’s time for it to stop,” he said.

Mr Evans said he wanted to apologise sincerely to those who heard the words spoken on the bus.

The bus incident follows the filming in 2019 of a group of boys from St Kevin’s college as they did a loud sexist chant on a tram on the way to an athletics event.

That footage was taken by a passenger on the packed tram, who, using the pseudonym Melanie, told the ABC: “They just took over the tram – it was a mass of boys, tall, strong, very loud – and that boisterousness was one thing, but it was the whole attitude.”

“You felt there was no respect for women, you felt you couldn’t say anything and if you did, you were concerned about what would happen next.”

Stalker, 46, is banned from ALL of Al Murray's shows

UK coronavirus death toll passes 21,000 as another 329 die in England including healthy 29-year-old – The Sun